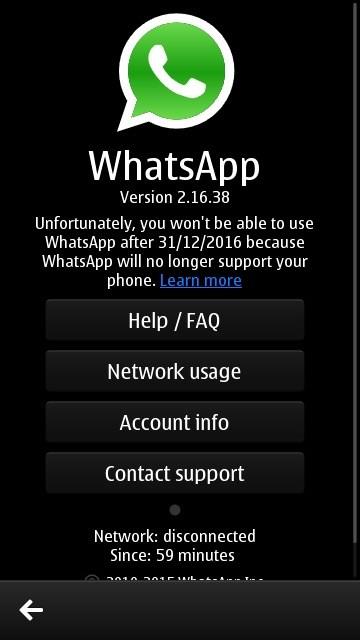 – WhatsApp has extended support for Nokia Symbian phones until June 30, 2017 – read more details in this post.

Bad news for old mobile phone users – the popular messaging app WhatsApp may stop working in your phone by the end of 2016. WhatsApp has officially declared that it will stop supporting following older mobile OSes –

While these mobile devices have been an important part of our story, they don’t offer the kind of capabilities we need to expand our app’s features in the future.

This was a tough decision for us to make, but the right one in order to give people better ways to keep in touch with friends, family, and loved ones using WhatsApp. If you use one of these affected mobile devices, we recommend upgrading to a newer Android, iPhone, or Windows Phone before the end of 2016 to continue using WhatsApp.

Unfortunately these platforms are no longer under development and their user-base is rapidly declining. So it’s a correct decision to stop wasting resources on the app development for such dead platforms. App developers are leaving these once-popular mobile platforms one by one. And soon these smartphones of yester-years will become feature phones capable of performing only basic functions.

Update (July 2016) – A notification saying “Unfortunately, you won’t be able to use WhatsApp after 31/12/2016 because WhatsApp will no longer support your phone” is now showing at “About” page of WhatsApp in Symbian and other such phones. Besides this message is also appearing as a pop up every now and then. There is a Learn more link at the end of this message which leads to the above blog post.

We also recommend that if you are still using an older mobile running any of the above OS, it is time to switch to a latest Android phone, iPhone or Windows (though I do not like the latter two). We have some suggestions for you if you want to switch right now. You may want to have a look at some of the affordable 3 GB RAM or 4 GB RAM Android phones. Or have a look at some 6 GB RAM premium, high-end droids if money is not a problem.