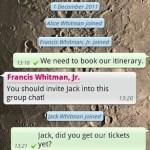 With the smartphone boom of the past few years, users have looked to messaging apps to take the place of their carrier’s SMS services. Messaging apps have a few benefits over traditional SMS, such as the ability to share larger files, but the main drawing point is that these services are typically free or cost much less. The gold standard in smartphone messaging for the last few years has been RIM’s BlackBerry Messenger, but it’s exclusive to BlackBerry devices. This has led to the rise of a number of alternatives. 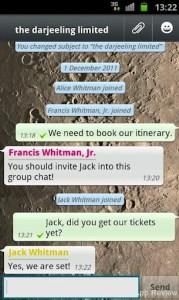 One of the most popular messaging services that has hit the market is WhatsApp Messenger. WhatsApp is available for iOS, Android, BlackBerry and Nokia. The service provides unlimited global messaging, with the option to send text messages or share media. Let’s take a look at WhatsApp and see if it’s worth installing. In terms of value, there’s a lot to write about WhatsApp. The makers of the app didn’t leave anything out. The app features a clean layout with a threaded conversation view. It allows users to send and receive text messages, pictures, videos, audios or even their location.

Messages can be sent over 3G or Wi-Fi and arrive on a user’s device quickly, thanks to the push notification system employed by WhatsApp. Aside from that, what really helps WhatsApp shine is how well it integrates into a users device. It automatically imports the contact list from whatever phone it’s installed on, so there’s no need to go through and manually copy in contacts. It also uses the phone number for whatever device it’s installed on, so there’s no need to fumble around with log-in names and passwords. Features are great, but what about actual performance? WhatsApp has an intuitive layout. There’s virtually no slowdown to speak of, and WhatsApp doesn’t seem to use more battery than any other app. The push notification system also works extremely well.Messages can be sent and received about as quick as SMS, regardless of whether they’re sent on Wi-Fi or a cellular network. If a user receives a message and his or her phone is off, it will be received once they turn it on.

Overall, the app is very well conceived and the execution of is nearly flawless. WhatsApp doesn’t have very many flaws to discuss. One could argue that a drawback of the app is that both users are required to have it in order to message, but that sort of comes with the territory of messaging apps. One flaw that WhatsApp doesn’t really have an excuse for is its lack of support for non-phones, such as the iPod Touch and Samsung Galaxy Player series. The app ties itself to a phone number, but it seems like MP3 players should be able to use a log-in and password combo. Since WhatsApp doesn’t require a cell network, supporting only phones seems like an odd decision. WhatsApp Messenger is a solid app. It’s extremely low-cost and can save users money on their SMS plan. Anyone with a smartphone should give it a look, regardless of what platform they’re on. 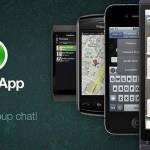