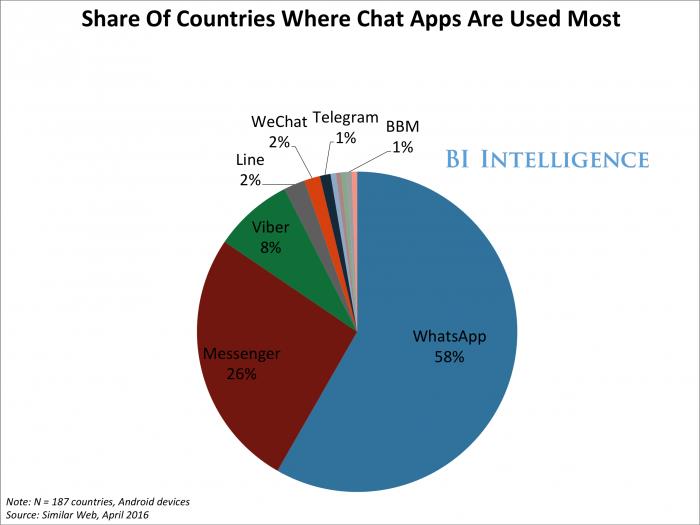 Messaging apps are growing by leaps and bounds, and WhatsApp is the leader of the pack, according to a recent SimilarWeb report.

Android device usage data reveals that WhatsApp is the most popular messaging app in 109 countries, which represents 58% of the 187 countries covered in the survey. This is actually somewhat surprising considering that the Facebook-owned app actually has far fewer capabilities than its competition.

This actually might work to its advantage, however, in developing markets such as Brazil, India, and Mexico, where data is expensive. The lack of more complex features in WhatsApp means that it is less likely to take up a significant portion of users’ monthly data plans.

On the other hand, WhatsApp’s popularity could simply mean that users still want to use messenger apps simply to communicate.

Facebook’s other chat app, Messenger, placed second overall, as it was the most popular chat app on Android devices in 49 countries. This likely stems from the fact that Facebook users must download a separate app to use Messenger.

Messenger was most popular in mature markets such as the U.S., Canada, and Australia. The key difference from WhatsApp is that Messenger supports more features, such as games, commerce, and chat bots.

Viber is the only other messaging app in the report that was the most popular in at least 10 countries. The app is particularly popular in Eastern European nations such as the Ukraine, Belarus, and Moldova, where it is reportedly installed on 65% of all Android devices. In the Ukraine, users on average spend at least 16 minutes per session on Viber.

Will McKitterick, senior research analyst for BI Intelligence, has compiled a detailed report on messaging apps that takes a close look at the size of the messaging app market, how these apps are changing, and the types of opportunities for monetization that have emerged from the growing audience that uses messaging services daily. 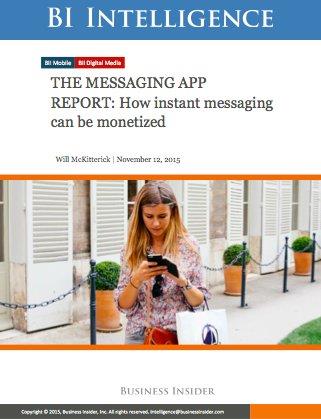 Here are some of the key takeaways from the report:

In full, this report:

To get your copy of this invaluable guide, choose one of these options:

The choice is yours. But however you decide to acquire this report, you’ve given yourself a powerful advantage in your understanding of the future of messaging apps.