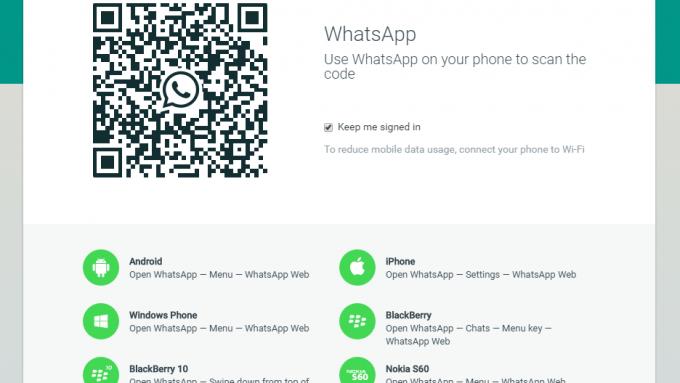 
Taking a look at DownDetector confirms this, with the service reporting problems across the continent. Not only that, but some WhatsApp users in countries such as Vietnam and India are also having problems sending messages.

In the meantime, here’s everything you need to know about WhatsApp.

Facebook didn’t buy WhatsApp without good reason. The service can proudly claim it has over one billion users sending messages and other data through its platform.More and more people are turning to the service to keep in contact, eclipsing rival messaging services such as Viber, Line, Telegram and even Facebook’s own Facebook Messenger. Even the humble SMS message is being left as a remnant of the past. The ubiquity and popularity of WhatsApp has grown so much that businesses are now using the service for employee communication as well as communicating directly with customers.

WhatsApp is available on iOS, Android, Windows Phone, BlackBerry and Nokia devices and the app is now available to download for free from their respective app stores. In the past, some versions of WhatsApp had a charge but that has recently been removed, so it’s now available completely free on all platforms. As WhatsApp is a cross-platform service, all versions of WhatsApp can send messages between one another. There aren’t any charges to send messages as WhatsApp uses your mobile data or internet connection.

WhatsApp is registered to your mobile telephone number. When you first open the app you’ll be asked to provide your phone number, after which an SMS verification code will then be sent. Enter this in WhatsApp and you’re good to go. Anyone you know who uses WhatsApp and has you in their Contacts list will see that the number is registered with WhatsApp and can then contact you via the service. That’s the genius of WhatsApp, it takes the telephone contacts you’ve had for years and uses them as a basis for an online messaging service.

What can I send on WhatsApp?

Can I have group chats in WhatsApp?

Every group chat will have at least one admin, and only they will be able to invite or remove participants. Everyone is free to leave a group chat whenever they wish. If the admin leaves the group, a new admin is randomly assigned from those who remain.

Yes. This wasn’t initially part of WhatsApp but was added around a year ago. Voice calls through WhatsApp, like everything else, uses your mobile data or Wi-Fi connection. This makes using WhatsApp calling a great alternative to making expensive phone calls while abroad and also handy if you’re in an area of poor mobile reception. Rumour has it WhatsApp is beginning trials of a video call feature, which shouldn’t come as any surprise. It could offer a viable competitor to Apple FaceTime, Skype, Google Hangouts and Facebook’s Messenger.

Are messages sent through WhatsApp secure?

What do the blue ticks mean?

You need to allow each computer to use your WhatsApp account by scanning a QR code from the WhatsApp app on your smartphone, after which you can communicate to your heart’s content.

Under WhatsApp’s Settings menu, you can navigate to Data usage to see how much data WhatsApp is using as well as how many messages have been sent and received. By default WhatsApp automatically downloads images as it receives them, meaning you could potentially use more data than you intend. You can turn this off from here, as well as control what is automatically downloaded when on Wi-Fi. If you find that videos are taking up a lot of storage space, it could be worth turning this off. There’s also a checkbox to turn on Low data usage,which reduces the amount of data WhatsApp uses during calls.

If you’re using the latest version of WhatsApp, you can now apply text styling to your messages such as bold, italics and strikethroughs. You can do this as follows:

Just pop those characters before and after the text you want to format. You can also double up on the formatting to create text that is in italics and bold, *_as an example_*.

Through WhatsApp’s Privacy settings (Settings then Account then Privacy) you can decide who is able to see your profile photo, status and online status. You can select between Everyone, My contacts and Nobody. Selecting My Contacts is useful if you ever get invited to a group chat with people you don’t know. If their number isn’t saved in your WhatsApp contacts list, their view of your user profile and information is restricted.

To then view all of your starred messages, from the main WhatsApp screen (the one that lists all of your WhatsApp conversations), hit the Menu button then select ‘Starred Messages‘ and you’ll be presented with an easily accessible list of all of your marked messages. If you want to remove a message from this list, long press it again and hit the star icon again.

Broadcast messages are essentially like a Bcc email. You’re able to send the same WhatsApp message to numerous recipients without the recipients knowing that numerous people have received the same message. It’s a good choice when you would rather not kick off a big new group chat. The broadcast message will appear in the individual conversations with each recipient and conversations continue separately. This is particularly useful if you have a lot of people to invite to an occasion. To send a broadcast message, from the main WhatsApp conversation screen, hit Menu then select Broadcast Message. Then individually select all of the recipients you want to message.