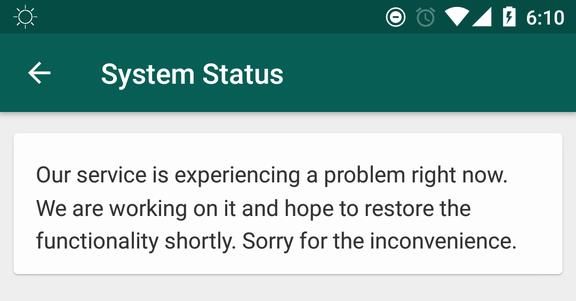 This is not a drill.

WhatsApp, the Facebook-owned app that 1.2 billion people count on to communicate, is down. Like, in many places it’s totally not working. And the internet is not pleased.

SEE ALSO: The cast of ‘Harry Potter’ have a WhatsApp group and it sounds simply magical

According to Down Detector, service problems started around 1 p.m. PT on May 3 and were ongoing at time of publication. Large swaths of Europe, Brazil, and parts of the United States appear to be suffering the brunt of the outages.

When your whatsapp isnt working but you are single so no worries pic.twitter.com/P0njzl9qHn

A WhatsApp spokesperson confirmed that the company’s service is experiencing problems.

“WhatsApp is aware of the issue and working to fix it as soon as possible,” the spokesperson wrote in an email.

We’ll update this post when we know more but, in the meantime, good luck out there.

UPDATE: May 3, 2017, 4:58 p.m. PDT You can finally breathe a sigh of relief, because WhatsApp is back! A company spokesperson confirmed the news via email.

“Earlier today, WhatsApp users in all parts of the world were unable to access WhatsApp for a few hours,” the spokesperson wrote. “We have now fixed the issue and apologize for the inconvenience.”

WATCH: Signs you’re reading too much into instant messages with emoji