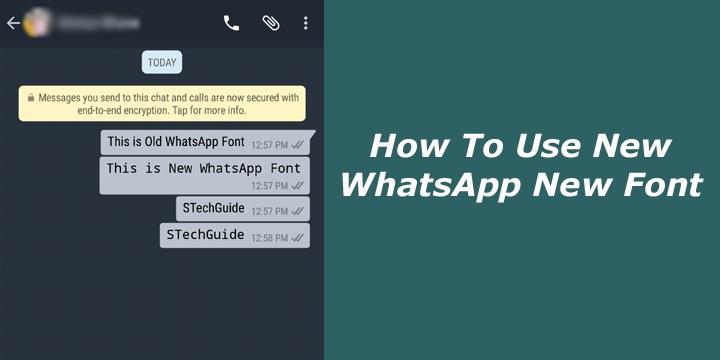 WhatsApp Introduces New Font in its recent update for Android and iOS. Here we share you how To Use New WhatsApp Font on your device. Recently WhatsApp frequently updated their app with many features and new changes. First, they introduce the new feature for sharing documents then they add font formatting options (bold, italics, and ). And now they introduce the new font. Here we discuss with you how to use new Whatsapp font.

The latest WhatsApp is rolling out the beta version of the app, which not only adds new Font but also adds support for voicemail and call-back. WhatsApp now has a ‘record a voice message’ button on the main screen when someone doesn’t pick up the call. WhatsApp is also reportedly working on a new video calling feature, which was spotted in an Android beta build, but later taken off.

The new whatsApp font is called FixedSys. The new font isn’t very practical to use. Because each time users will have to put backquote symbol (`) three times before and after the text. So if you want to use WhatsApp new FixedSys font and want to type ‘STechGuide’, you will have to type it like this ` ` ` STechGuide` ` `. The text previews into the new font before users send it, and cannot be combined with other formatting options like bold and italics. The new FixedSys font for WhatsApp is available for both Android and iOS users.

WhatsApp also added a new feature which alerts the user if it takes a while to download a text message. If you are looking for more formatting options, you can send messages in italics by adding an underscore (_), bold by adding an asterisk (*), and strikethrough with a tilde symbol (~) before and after the message.