WhatsApp for Windows Phone is going to have new privacy features and background gallery which would allow you to restrict the access to your last seen time, profile photo and status . This feature was lately available in Android phones and now this is coming to Windows Phone as well .The new WP app also allows you to change the background image either  by choosing an image from the background gallery or manually same like the WhatsApp for iPhone and Android.

With the new privacy features you can set the access of your last seen time, profile photo and status to either of Everyone, My Contacts or Nobody. 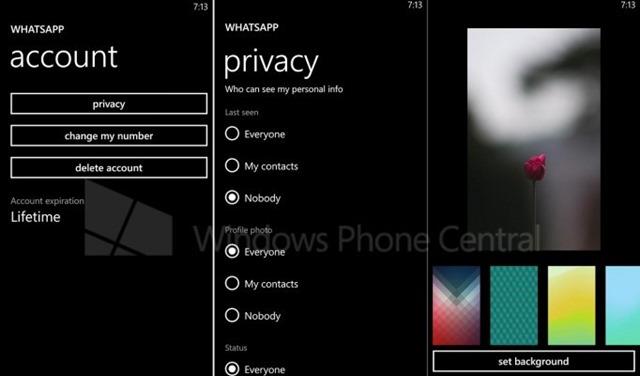 According to WPCentral these features are already available in a recent update in WhatsApp for Windows Phone beta.The new beta version has a new background gallery with six wallpapers to choose from.

Background images were released in a beta update earlier this month. Apart from this you can also take a photo, choose from albums or search web and also delete the background image. Although there is no access to the private beta version as of now, the final version is expected to reach out to the users through Windows Phone Store at earliest.