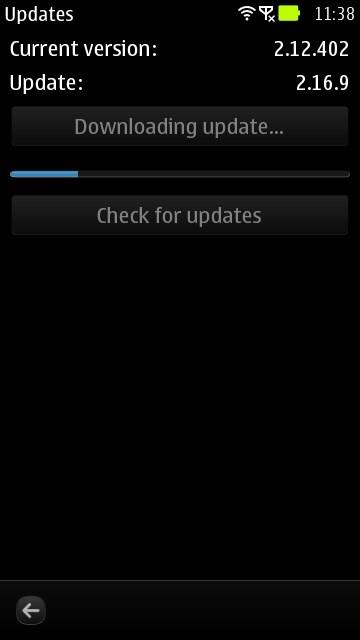 – Finally WhatsApp stopped working in all Symbian S60 phones on July 18, 2017. The version update (2.16.57) described in the following older post happened to be the last Symbian S60 version of WhatsApp.

WhatsApp for Symbian got an update to version 2.16.57 recently. WhatsApp is one of the very few apps left now for Symbian which are still getting official updates. Rest of the app publishers have stopped the development of their apps for “now-dead” mobile OS. This is indeed a sad state of affairs considering the fact that millions of users (especially in developing countries of Asia and Africa) are still using Symbian^3/Belle based phones. Microsoft has already discontinued every online service related to Symbian including the original Nokia Store website and app. Thus it is not possible now for developers to update any app via Nokia (Ovi) Store.

What is new in WhatsApp 2.16.9? No official change-log is available for the new version. However we have noticed a new message displaying under chats which reads “Messages you send to this chat are now secured with end-to-end encryption. Click for more info“. Touching on this message further says “……which means Whatsapp and 3rd parties can’t read them”. A “Learn more” link is also given at the end of this message. This end-to-end encryption feature is available when the latest version of Whatsapp is installed on both ends (receiver and sender). So now you can be rest assured about the privacy of your messages sent or received.

How to update? – If you have a Symbian phone with WhatsApp installed then launch it (phone must be connected to internet) – WhatsApp has a built-in automatic update-check function – it will notify you of the available update. Besides you can also manually check for update via Menu – Settings – Updates – Check for updates – wait for a while as the app checks and shows the available update – if available select the “Install update” button – wait as the new version is downloaded and installed. Alternatively you can also download the latest version of WhatsApp for Symbian sis file free from the official site.

Update (August 2017) – WhatsApp has removed the “Nokia/Symbian” download page from the official site. So if you want to download the sis file (new or old) now, please refer to this post for direct download links.