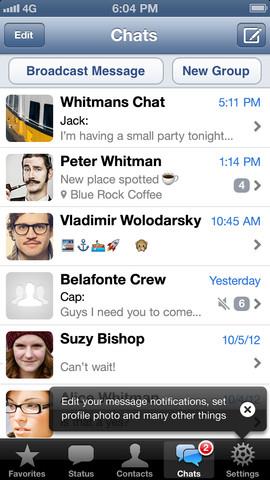 WhatsApp is arguably the most popular cross-platform mobile messaging solution out there and while it currently lacks a desktop client (unlike its rival Viber), it’s just become a whole lot more useful by introducing a significant new feature: voice memos, a pet project of its CEO over the past six months.

Unlike Facebook’s Messenger iOS app that requires three taps to make a voice recording, it only takes a single tap to record and send a voice memo in WhatsApp. And no, it’s not a staggered release: the new WhatsApp with push-to-record voice messaging is available now simultaneously on iOS, Android, Windows Phone, BlackBerry and Nokia…

Simply push the recording button, start speaking and let go when done. To cancel the recording in progress, swipe to the left and the voice memo gets deleted.

Even better, The Mountain View, California messaging startup that employs 45 people said the new version puts no length limit on voice memos. For example, you could leave your significant other a short clip just a few seconds long, but also a five-minute video or even half an hour footage for that matter.

That’s in stark contrast with other popular messaging apps which impose pesky length limits for voice recordings. Skype Video Messages, for example, can be up to three minutes long. And Facebook’s Messenger has even shorter voice messages, up to only a minute in length. 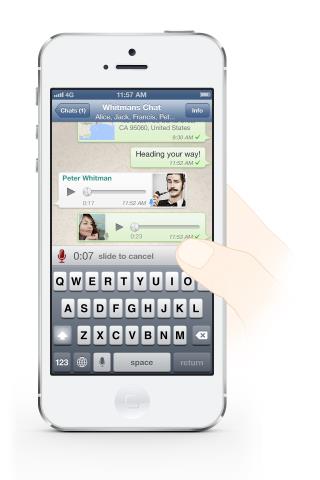 I like how the volume automatically switches from speaker when you hold the device a few inches away to soft when you press it against your ear.

Another nice touch: a blue microphone icon tells you when the recipient has played your voice message.

• WhatsApp now has 300 million monthly active users • 20 million active users across Germany, Mexico, India and Spain • users now send 11 billion messages and receive 20 billion messages per day, up from 27 billion total in June • 70 percent penetration across the entire population of Brunei (not even limited to residents who have smartphones) and 50 percent penetration in Hong Kong • people now sharing 325 million photos per day via WhatsApp

Although Koum wouldn’t disclose the number of users who have paid so far, he did assure that he has no interest whatsoever to monetize users with ads.

Up next for the startup: more “media-focused” products that, according to the CEO are building on all the photos WhatsApp users are already sending.

WhatsApp is free during the first year – after that, it will run you $0.99 per year.

The app can be downloaded from the App Store.