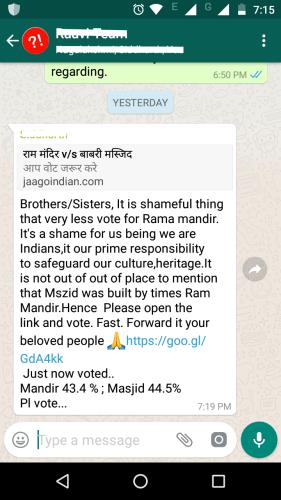 Ram Mandir v/s Babri Masjid What should be built in Ayodhya? Vote

1. Brothers/Sisters, It is shameful thing that very less vote for Rama mandir. It’s a shame for us being we are Indians,it our prime responsibility to safeguard our culture,heritage.It is not out of out of place to mention that Mszid was built by times Ram Mandir.Hence Please open the link and vote. Fast. Forward it your beloved people https://goo.gl/GdA4kk

A message in circulation through free messaging service WhatsApp and other social networking sites like Facebook presents a Poll for users in India to Vote whether Ram Mandir or Babri Masjid should be Built at the disputed land of Ayodhya in Uttar Pradesh. The message accompanies a link through which the readers can supposedly vote. Let us analyze the authenticity of the claim and the poll, whether or not it is true. 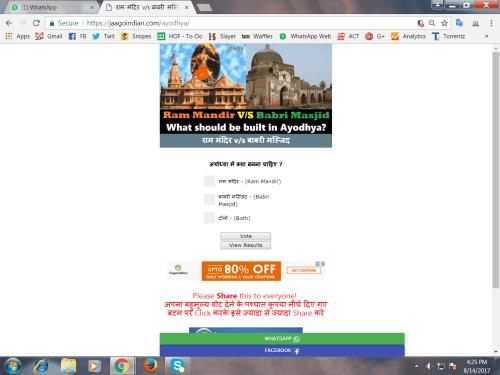 To test the claim of story in question, when we clicked through the shortened URL in the message, we were redirected to a web page URL jaagoindian.com/ayodhya/ that hosts the poll – Ram Mandir V/S Babri Masjid, as to what should be built in Ayodhya. The Poll is presented in Hindi language too and there is also the option to choose that both (Ram Mandir and Babri Masjid) should be built in Ayodhya. 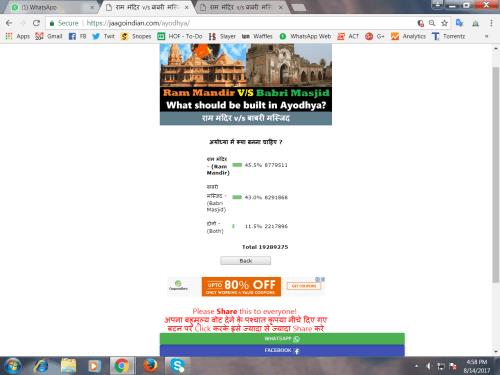 Once we have voted in the poll, we saw a ‘Thank you for voting’ pop up message along with the results, after which voters are asked to share the poll with others using their WhatsApp or Facebook accounts by clicking the buttons available at the bottom of the web page. 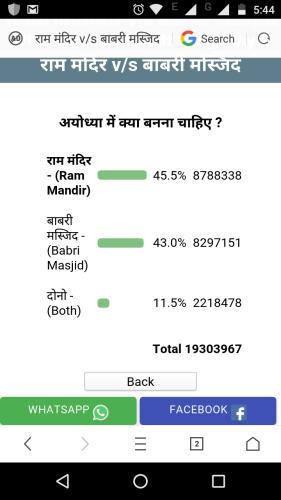 The Who Is Domain information of the website jaagoindian.com shows the registration is private, created in June 2016 expiring after one year, and the registrant state is Arizona. Apart from the poll page, there are no other pages in the website, and the link to its main page shows ‘Forbidden’ error. But for the poll, there are no other details in the website as to who is conducting it and for what purpose. Importantly, as we viewed and checked the poll results over a period of three hours, we observed the votes are continuously increasing at random, with the percentage of votes remaining same.

As reported by Hindustan Times website hindustantimes.com, earlier in April 2017 there was a scam website conducting poll on Ram Mandir-Babri Masjid dispute, and the associated message (shown below) circulated through WhatsApp:

Do you want Ram Mandir or Babri Masjid on the Ayodhya disputed land? I have participated in Online Poll on Ayodhya Issue. Request you to vote on http://ayodhya-issue.gov-up.in/. It is important to share our views with Govt.

Note, the website – ayodhya-issue.gov-up.in – had a URL misleadingly similar to the UP Government’s official website www.up.gov.in, and the poll was also presented as an initiative of the state’s new Chief Minister Yogi Adityanath.

In the current case, the poll message on website jaagoindian.com is spread through WhatsApp and there is also a Facebook page Jaago Indian created in July 2017 that does not have any posts except couple of promotional ones as of this writing. Despite lack of any credible information, the website does carry advertisements.

Considering all the aforementioned facts and flaws, the Ram Mandir V/S Babri Masjid poll conducted by website jaagoindian.com is fake, hoax and scam. Note that the scams can also exist in other domain names. Exploiting sensitive religious news about a disputed land issue at Ayodhya in this way is not a healthy idea; it also conveys a wrong message among public in general.