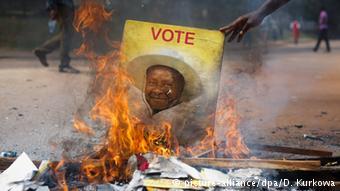 “I, Yoweri Kaguta Museveni swear in the name of the Almighty God that I shall faithfully exercise the functions of the President of the Republic of Uganda,” Museveni said to a cheering crowd of supporters.

The event was held at a parade ground-cum-airstrip on a hillside in the capital Kampala. Museveni, 71, added that he would “uphold, preserve, protect and defend the constitution, and observe the laws of Uganda.”

In power since 1986, Museveni spoke in his canary yellow muffs, the color of his ruling National Resistance Movement (NRM) party and his trademark khaki bush hat with chin strap and a dark business suit.

Local media reported that social media sites including Twitter, Facebook and Whatsapp were blocked during the swearing-in ceremony.

Behind a bullet proof glass, Museveni stayed on the podium after his swearing-in holding up the various instruments of power including the presidential seal and a Uganda flag. Then the military marching bands played, a 21-gun salute was fired, soldiers in dress uniforms trooped by and jets whizzed overhead as the crowd watched on.

The main Ugandan opposition party, the Forum for Democratic Change (FDC), says it does not recognize President Museveni as the elected president.

FDC party stalwarts announced via Twitter on Wednesday that they had organized their own inauguration ceremony for their leader, Kizza Besigye, who they claim actually won the election held.

A surprise appearance by Besigye in Kampala at the FDC rival inauguration ceremony prompted a huge turnout by chanting supporters.

Local media reported that shortly after Besigye’s arrival in Kampala, police broke up the gathering, took Besigye into custody and drove him away to a secret location.

The FDC now relies on social media platforms like Twitter to maintain contact with supporters following a government move to ban the media from reporting live on their activities.

“We are stopping it because there is a court order that says ‘don’t cover live’,” Minister of Information Jim Muhwezi said last week, as he announced a total ban of all live coverage of opposition activities.

The opposition has pledged to continue a “fierce defiance campaign” against Museveni’s swearing-in ceremony.

After the election, Uganda’s electoral commission announced that Museveni polled 61 percent of the total vote cast, whereas his key rival Besigye came second with 35 percent. Local and international observers who monitored the poll said the elections were marred by serious irregularities including vote rigging.

Many in Kampala, an opposition stronghold, continue to demonstrate against Museveni

Besigye and another presidential contestant, former prime minister and ally of Museveni Amama Mbabazi, vowed to contest the result in court. But Besigye was immediately arrested by the police on the grounds that he represented a threat to public order. He was kept under house arrest at his home outside Kampala city for several weeks.

Mbabazi did file a petition but a high court judge dismissed the case for lack of evidence.

Suppressing rights in the name of security?

Prior to his re-inauguration, President Museveni announced he would do everything in his power “to keep the peace” in the country.

“Any media which contravenes this directive… risks losing its broadcast license,” Information Minister Muhwezi said. “If there is an order for Dr Kizza Besigye not to continue with his defiance campaign, when you give him a platform to speak live to the whole world, then you are defying that order. You are an accomplice. Of course, he will be found guilty, but you will be guilty too,” Muhwezi added.

The minister accused Besigye of carrying out a campaign to disrupt Museveni’s swearing-in ceremony and to “cause anarchy with an objective of using unconstitutional means to take over power.” 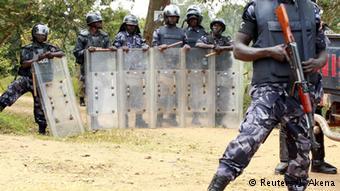 Kampala has been under tight security control ahead of the inauguration

Amnesty International said on Wednesday that Museveni’s inauguration “comes amidst a crackdown on the rights to the freedom of expression, association and assembly.”

“The arbitrary detention of political opposition leaders and their supporters, the recent ban on live media coverage of opposition activities and the violent disruption of peaceful opposition gatherings in the lead up to and since election day not only violate Uganda’s own constitution, but also fly in the face of its regional and international human rights obligations,” the rights organization said in a statement.

Rights activists say that, in his 30 years at the helm in Uganda, Museveni has successfully transformed himself into an autocratic and despotic ‘supreme leader:’ “We have seen armed men in uniform, especially the police, target journalists at all times,” said Robert Sempala in a DW interview. Sempala is a human rights journalist with the Ugandan Human Rights Network for Journalists (HRNJ).

HRNJ accuses the government of setting up a division within the police to specifically target bloggers, political talk show hosts, TV news anchors, and radio reporters. “It is condoned by the leadership of the police because we have lodged so many complaints with the police’s standards unit, which is the disciplinary body of the police, but not even a single case has been investigated in over three years,” Sempala said. 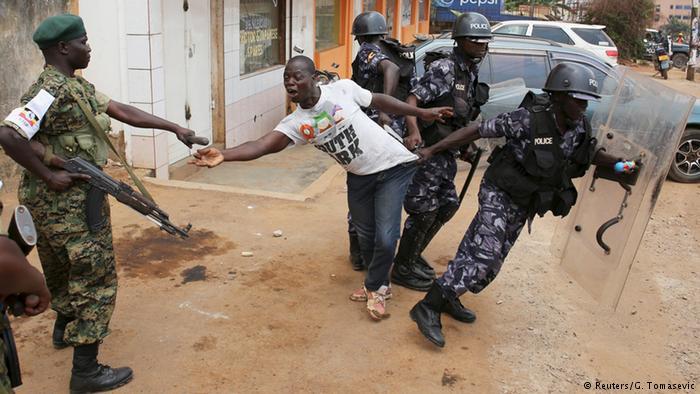 On election day in February, Museveni ordered the shutdown of interactive social media platforms including Twitter and WhatsApp. He justified this by saying people had been using these platforms to plan demonstrations and disrupt public order.

Besigye’s party, the Forum for Democratic Change (FDC), say they refuse to be cowed by the restrictions. The FDC held a series of post-election demonstrations, including a weekly prayer session, at their party headquarters in Kampala. The sessions were attended by hundred of Besigye supporters.

However, 24 of those who turned up for the event last week were arrested and detained, including Erias Lukwago, mayor of Kampala city. The police said there was a court order banning all demonstrations and Lukwago had defied the order when he attended the prayer session.

However, African leaders, including former African Union chairman Robert Mugabe, have given their approval to Museveni’s re-election. He now embarks on his fifth term as president.