Most iPhone users spend a lot of time typing in Messages, the text messaging app native to iOS that sends iMessages between yourself and others. While the basic functionality is pretty straightforward, what’s perhaps a little less obvious is how to enter onto a new line when typing an iMessage without actually sending the message

, or creating a line break, again without sending the message yet. The answer to this is right in front of us on the iOS Keyboard:

In iOS, just hit the Return key to jump onto the next line within an iMessage. Hit the Return key twice and you’ll insert a line full line break, creating a space between the text but keeping it within a single message. The screen shots below demonstrate this in the Messages app on an iPhone: 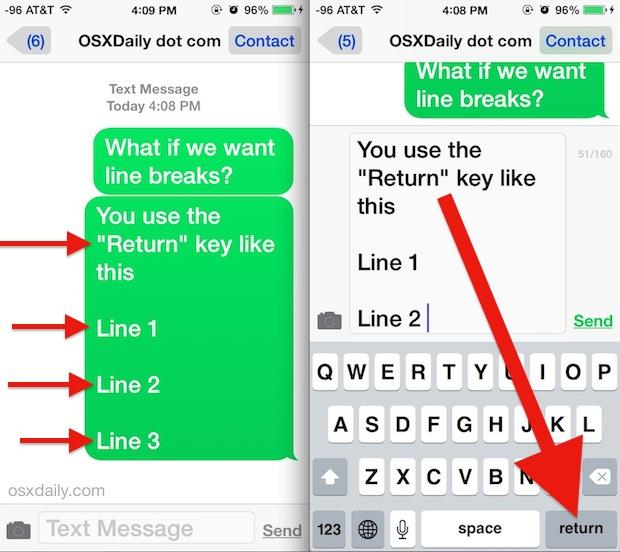 You can repeat it as necessary if you want to create a bunch of gaps between your text messages. The line breaks and spaces come through regardless of whether the recipient is on iOS with iMessages or an Android with standard SMS. 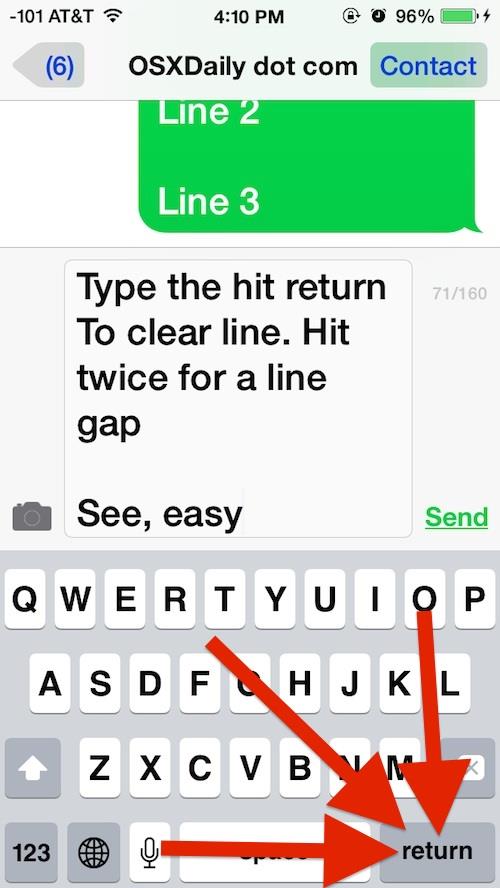 This differs from the Mac, where hitting the Return key in Messages for OS X sends the message (remember in iOS we have an actual ‘Send’ button)… more on the Mac version in a moment.

This post comes in response to a reader inquiry from Selma R., who, like many iPhone users, thought it just wasn’t possible to break to a new line in the iMessage client. Generally speaking if we get a question about something, that means many other users may be curious too, so if you were not sure how to do this before, you’re certainly not alone, as many users seem to think the ability to create a line break is simply missing from iOS. But alas, it’s right there in front of our faces, even more obvious than some of the other finer details of Messages app that are slightly hidden, like swiping to view the timestamp of a message, swiping the other way to delete a message, or tapping-and-holding to re-send an iMessage as an SMS text instead.

And yes, this works the same on Messages app for iPhone, iPad, and iPod touch.

Creating a Line Break in Messages for Mac

iOS users that also have a Mac may be wondering how to accomplish the same line-break or new-line functionality in the OS X Messages app… since obviously hitting the “return” key just sends the message.

On the Mac, if you want to create a line break in the OS X Messages app by holding down the OPTION key and then hit RETURN to jump to a new line without sending the message. When satisfied, you can then OPTION+RETURN again to jump again to a new line, or just hit the return key on it’s own to send the message as usual. Happy chatting.