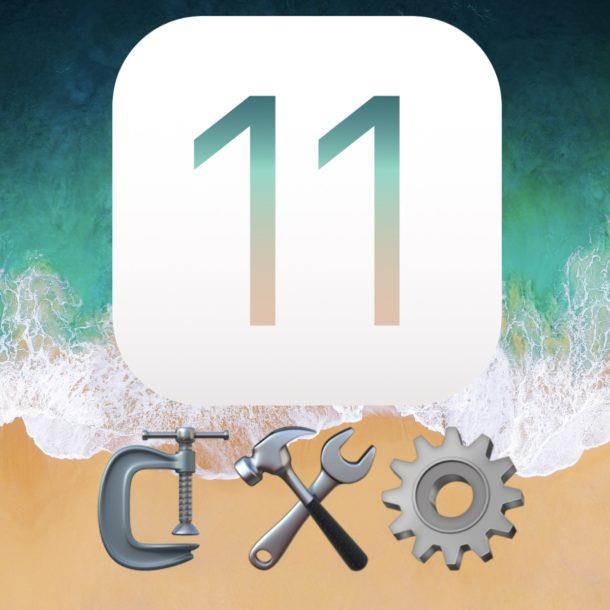 Most users are able to install iOS 11 onto an iPhone or iPad without any incident, and they are ready to enjoy the best new features available in the new system software version. But that’s most users.

Unfortunately, problems may arise during an iOS software update, either when attempting to install, or with a failed installation, or various issues occurring after the iOS 11 update has completed. The good news is almost all issues can be fixed with a little troubleshooting effort.

Check for a New Software Update

Despite iOS 11 just being released, Apple has already issued software updates to the operating system that aim to address various bugs.

Currently, iOS 11.0.1 is available to download and install now by going to Settings > General > Software Update.

Be sure to install any available system software updates, as included bug fixes may address particular issues encountered with the broader iOS 11 release.

Often simply rebooting the iPhone or iPad, and then trying again is sufficient to remedy those error messages.

Other times, waiting a few hours can help. This is particularly true if the software update server is overloaded by requests when a software update is first released. A little patience tends to fix this problem.

You can also try updating iOS 11 as usual after some time has passed, or even installing the iOS 11 update manually with firmware and iTunes if all else fails and you want to get the update installed right away.

iPhone or iPad Stuck on Black Screen, Device is Unusable with iOS 11

Rarely, an iPhone or iPad may fail during the actual installation of iOS 11 or another software update. This is quite unusual, but when it does occur it’s usually pretty obvious in that the iPhone or iPad will be stuck on an  Apple logo screen for many hours without a progress bar, or the device screen will be stuck in some otherwise unusable state with a completely black or completely white screen.

If you experience a complete software installation failure and a stuck device, you’ll first want to give the iPhone or iPad some time to see if it can continue the installation on it’s own. Sometimes the software updates go slower than expected, and it may take over an hour to complete in some situations.

If you know for certain the update failed and the device is rendered unusable, you will need to restore the device with iTunes.

Simply connect the iPhone or iPad to iTunes and then choose “Restore” from the options available.

If the device is not recognized by iTunes, placing it into Recovery or DFU mode and then restoring may be necessary.

Some apps are not working at all, or 32-bit apps disappeared after iOS 11 update

Some apps are not compatible with iOS 11 because they are 32 bit. Essentially this means that any apps which have not yet been updated to be 64 bit by their developer will either be nonfunctional, or sometimes disappeared from the device entirely if a user restored and the 32-bit incompatible apps were unable to re-download to the device.

The only solutions to the 32-bit app issue is to either have the app developer update the application to be compatible with iOS 11, or avoid iOS 11 entirely.

You can check for 32-bit apps and iOS app compatibility if you are not sure which apps may or may not work with the latest iOS system software.

Apps are crashing after iOS 11 update

If you are noticing apps crashing after updating to iOS 11, the first thing you should try to do is to update the apps. Often developers will have released a software update which will improve compatibility or remedy these type of problems.

Simply open the App Store on the iPhone or iPad, and check for and install any software updates available to the apps.

Many users report battery life issues after updating to iOS 11 (or any other software update for that matter).

The good news is that most battery issues with iOS 11 are related to background activity that completes itself after a software update. Simply plugging a device in over night allows the system software to complete indexing and other tasks, and the battery should behave normally after that. Sometimes this can even take a few days, depending on individual device usage, storage capacity, and content on the device itself.

You can review tips to fix iOS 11 battery life problems here if issues persist, with some suggestions on what features to adjust if need be.

There is a problem with some Microsoft Outlook.com, exchange, Office, and related emails with iOS 11.

The Outlook/Microsoft mail problem is described by Apple:

You might see an error message that says “Cannot Send Mail. The message was rejected by the server.”

If your email account is hosted by Microsoft on Outlook.com or Office 365, or an Exchange Server 2016 running on Windows Server 2016, you might see this error message when you try to send an email with iOS 11: “Cannot Send Mail. The message was rejected by the server.”

Again, simply installing the latest release of iOS 11.0.1 (or newer if one appears) should resolve the Microsoft email problems on an iPhone or iPad.

3D Touch Multitasking Gesture Not Working on iPhone with iOS 11

The popular 3D Touch multitasking gesture on iPhone was removed from the initial release of iOS 11 for some reason, but there’s good news: it will apparently be back in a future software update to iOS.

Be sure to follow up and install software updates as they become available to iPhone to get 3D Touch multitasking gesture back when it becomes available again.

iOS 11 is slow, or an iPhone or iPad feels slow after updating to iOS 11

Some people report an iPhone or iPad feels slow after updating to iOS 11. Older devices in particular may experience some sluggishness after installing a more recent software update.

There could be various reasons for this performance drop, including a device performing background activity and maintenance (which usually remedies itself in a day or two much like the advice for handling iOS 11 battery problems), or for some older devices the hardware may not be well equipped to handle the new iOS 11 features that demand more performance.

Follow these tips to help speed up a device that feels slow with iOS 11.

If you feel the performance of a device is unbearable after installing iOS 11, you can downgrade from iOS 11 to iOS 10.3.3 for the time being, though the window to do so is usually fairly short.

Sometimes users report their iPhone or iPad feels hot or warm to the touch after installing a software update.

The reason for a hot device is usually the same reason some users experience battery drain after installing system software updates, and that is background activity that iOS performs to index the device. This includes indexing for Spotlight search, Photos faces and object recognition, and other maintenance tasks.

If an iPhone or iPad feels warm or a bit hot after installing iOS 11, simply let the device perform necessary maintenance overnight and it will usually remedy itself.

If a device feels unusually hot (or dangerously hot), there may be a hardware problem or an issue with the battery. This is rare and would be almost certainly unrelated to a software update, but unusually extreme heat emanating from a device would warrant a discussion with an official Apple Support channel or visit to an Apple Store.

Some users report their iPhone or iPad has become unresponsive frequently with various apps or when interacting with the Home Screen of their iOS devices since the iOS 11 update.

If the device is freezing after iOS 11 has been installed, the first thing users should try is to hard reboot the device, which may remedy the situation.

If one particular app is freezing, updating that app via the App Store may resolve the frozen app problem.

Be sure to check for additional software updates in Settings app as well, numerous bug fix released have been made available by Apple which could fix the freezing problem.

Finally, backing up and restoring the device with iTunes could be a solution and is part of the standard troubleshooting regimen for freezing devices.

Some users report iOS 11 Mail is not properly pushing or fetching mail, or failing to deliver new mail notifications. If the email account with issues is Outlook, MSN, or Hotmail, install the latest iOS software update that is available and the problem will likely be fixed.

Reboot the device, then go to Settings > Mail > Accounts > Fetch New Data and be sure the setting is adjusted appropriately.

You can also check Notifications settings in the Settings app for Mail to make sure you have mail notifications enabled.

Some users report an inability to connect to wi-fi networks after updating to iOS 11. Often this is fixed with resetting network settings, but be forewarned that you will lose saved network passwords and memorized wi-fi networks. From the Settings app, go to “General” then to “Reset” and choose “Reset Network Settings”