For more than a half-century, the Justice Department has relied on wiretaps as a fundamental crime-fighting tool. To some in law enforcement, if companies like WhatsApp, Signal and Telegram can design unbreakable encryption, then the future of wiretapping is in doubt. No decision has been made, but a court fight with WhatsApp, the world’s largest mobile messaging service, would open a new front in the Obama administration’s dispute with Silicon Valley over encryption, security and privacy.

Whether the WhatsApp dispute ends in a court fight that sets precedents, many law enforcement officials and security experts say that such a case may be inevitable because the nation’s wiretapping laws were last updated a generation ago, when people communicated by landline telephones that were easy to tap.

Some investigators view the WhatsApp issue as even more significant as the one over locked phones because it goes to the heart of the future of wiretapping. They say the Justice Department should ask a judge to force WhatsApp to help the government get information that has been encrypted. Others are reluctant to escalate the dispute, particularly with senators saying they will soon introduce legislation to help the government get data in a format it can read.

WhatsApp, which is owned by Facebook, allows customers to send messages and make phone calls over the Internet. In the last year, the company has been adding encryption to those conversations, making it impossible for the Justice Department to read or eavesdrop, even with a judge’s wiretap order.

As recently as this past week, officials said, the Justice Department was discussing how to proceed in a continuing criminal investigation in which a federal judge had approved a wiretap, but investigators were stymied by WhatsApp’s encryption.

Even though the FBI’s case with Apple is very important, many in law enforcement think that’s what’s happening with ‘WhatsApp’ is of far greater concern.

The mystery as to what has actually changed or when the government realized that recent White House policies directly contradict the everyday needs of law enforcement isn’t known. But there’s definitely been a change of heart by the White House.

Businesses, customers and the United States government also rely on strong encryption to help protect information from hackers, identity thieves and foreign cyberattacks. That is why, in 2013, a White House report said the government should “not in any way subvert, undermine, weaken, or make vulnerable generally available commercial encryption.”

In a strange twist, the government actually helped develop the technology behind WhatsApp’s encryption. To promote civil rights in countries with repressive governments, the Open Technology Fund, which promotes open societies by supporting technology that allows people to communicate without the fear of surveillance, provided $2.2 million to help develop Open Whisper Systems, the encryption backbone behind WhatsApp.

Because of such support for encryption, Obama administration officials disagree over how far they should push companies to accommodate the requests of law enforcement. Senior leaders at the Justice Department and the F.B.I. have held out hope that Congress will settle the matter by updating the wiretap laws to address new technology. But the White House has declined to push for such legislation. Josh Earnest, the White House spokesman, said on Friday that he was skeptical “of Congress’s ability to handle such a complicated policy area.”

Those who support digital privacy fear that if the Justice Department succeeds in forcing Apple to help break into the iPhone in the San Bernardino case, the government’s next move will be to force companies like WhatsApp to rewrite their software to remove encryption from the accounts of certain customers,” writes the NYTimes. This explains why WhatsApp founder Jan Koum was one of the first to support Tim Cook’s stance against the FBI. 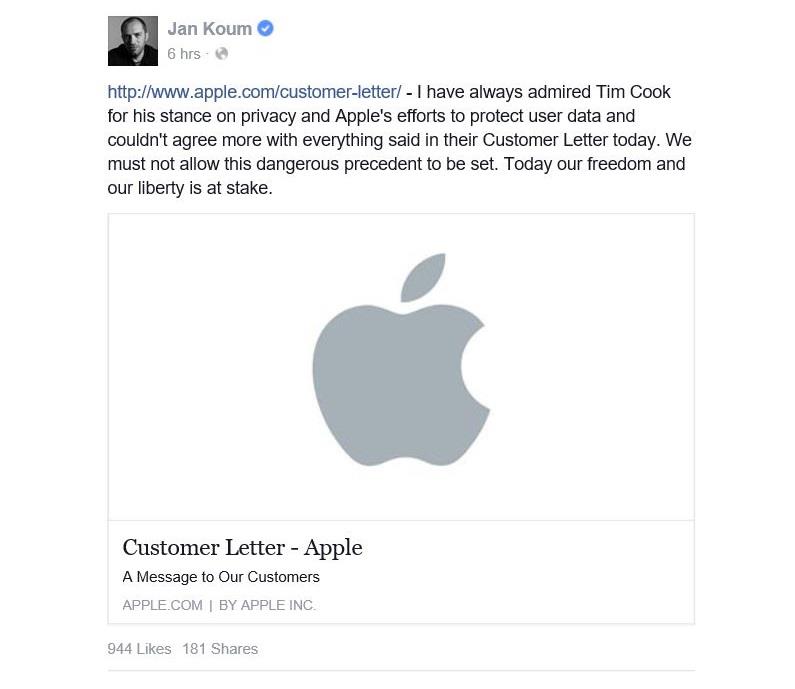 The New York Times quoted Chris Soghoian, a technology analyst with the American Civil Liberties Union, as saying “That would be like going to nuclear war with Silicon Valley.”

WhatsApp co-founder Jan Koum had spoken about implementing end-to-end encryption to its chats at annual Digital-Life-Design (DLD) conference in Munich in January 2016, reports the Indian Express. Koum had said, “We are a couple of months away from calling it done. Soon we will be able to talk more about this.”

So while Apple is taking all of the heat over the privacy issue today, it’s clear that Facebook’s WhatsApp is next in the government’s crosshairs.

On Friday when President Obama was interviewed about the problem with encryption, he finally noted: “My conclusion so far is that you cannot take an absolutist view on this. So if your argument is: strong encryption no matter what and we can and should in fact create black boxes; that I think, does not strike the kind of balance that we have lived with for 200-300 years and its fetishizing our phones above every other value and that can’t be the right answer.”

In light of the White House’s 2013 policies that were noted earlier in this report, it’s clear that recent circumstances involving terrorist acts in Paris and San Bernardino have changed the Government’s view of the encryption issue. And this is what’s angering both law enforcement and the public: U.S. Policies that are razor thin and that change with the tide. So while President Obama isn’t a fan of ‘absolutism” on the issue of encryption, most are fed up with a government talking on both sides of its mouth whenever it suits the political winds du-jour.