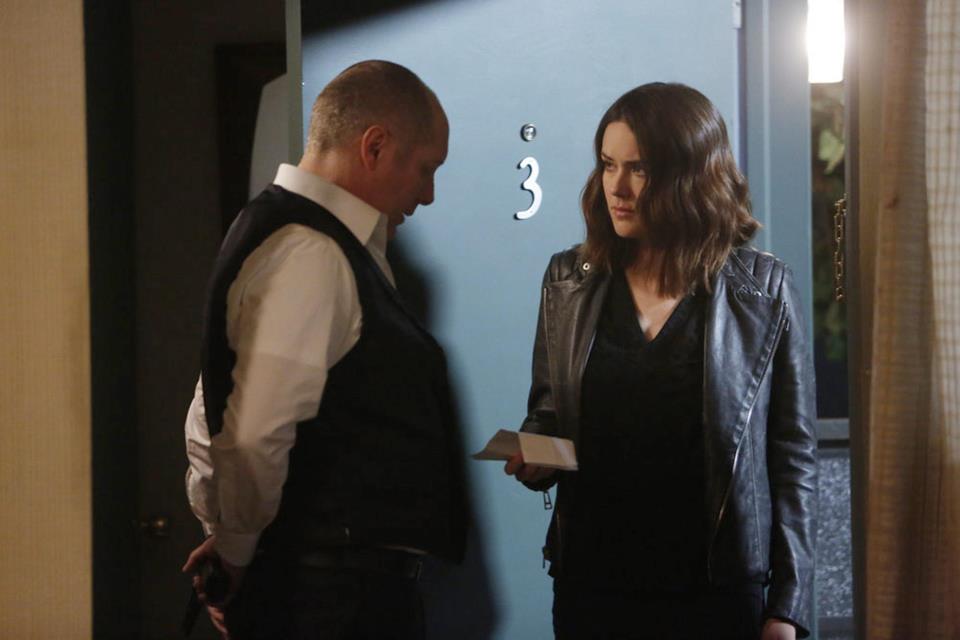 It was a foregone conclusion that only one person would survive the final showdown between Red Reddington (James Spader) and his former right-hand woman, Mr. Kaplan (Susan Blommaert), on The Blacklist, and that came to fruition on Thursday’s Season 4 finale. So, who paid the ultimate price?

But Mr. Kaplan wasn’t the only casualty of the hour. Laurel Hitchin (Christine Lahti) is also a goner, felled after Ressler (Diego Klattenhoff) accidentally backhanded her while brushing off a taunt… and sent her careening into the corner of a wall, where she cracked her skull and bled out onto her own carpet. It was a scenario that Ressler had probably spent a number of hours fantasizing about, and a fitting end for their rivalry, coming just as it looked like Hitchin was about to walk away scot-free for the murder of Reven Wright, in exchange for getting a grand jury case against the task force thrown out.

So, how did all this go down? Let’s recap from the beginning.

With the walls closing in around him and Mr. Kaplan dismantling his financial accounts one by one, Red grows increasingly desperate. At the same time, Julian Gale (Enrique Murciano) has put the pieces together and figured out that Red has been an informant for the FBI all this time. Aram (Amir Arison) receives a grand jury subpoena and is told that he’ll be granted immunity if he testifies against his colleagues.

Just as Cooper (Harry Lennix) and the rest of the task force are resigned to the fact that they’re all going to jail, Red gets in touch with the fixer who disposed of Reven Wright’s body and exhumes it, so that he and Ressler can use the ballistics to blackmail Hitchin into getting the grand jury to drop the case.

While that’s going on, Aram goes to court and refuses to rat on his colleagues, so is thrown in jail and charged with contempt. Samar (Mozhan Marno) goes to visit him, and has also figured out that his girlfriend Janet (Annie Heise) is the one who gave up his name in the first place. Later, when Janet apologizes to Aram, figuring Samar has told him about her betrayal (she hadn’t), Aram dumps her and rushes back to the post office, where he kisses Samar.

But she’s not out of the picture for long. She and Red reconvene on a bride, with the police hot on their tail (though they keep their distance). Kate tells Red that she’s realized getting him out of Liz’s life is unnecessary; all she has to do is tell Liz the truth about their “secret” back at the farm — which she’s already dug up — and has a “contingency plan” in place to reveal to Liz upon her death, since she knows Red is going to kill her. Red looks stricken, and Kaplan implores him to shoot her. When he won’t do it, she throws herself off the bridge.

Not so this time. Liz get the results back and brings the envelope to Red to confront him. The test confirms that she is his daughter, something that she’s known deep down all along, since thinking like a criminal comes so naturally to her. Red expects her to leave him for good, but Liz takes the opposite approach. “Anger and fear and a certain amount of hatred are all normal in a family, and that’s what we are,” she says, before embracing him.

Just kidding. In the final moments of the episode, we see Red and Dembe returning to the farm. Dembe confirms that Red didn’t deny that he was Liz’s father. “And she thinks that’s Kate’s secret, so she doesn’t know about the suitcase,” Dembe muses, shortly before he and Red come upon a very freshly dug hole. “I’m not sure Elizabeth will ever be ready to learn about what you did to Katarina.”