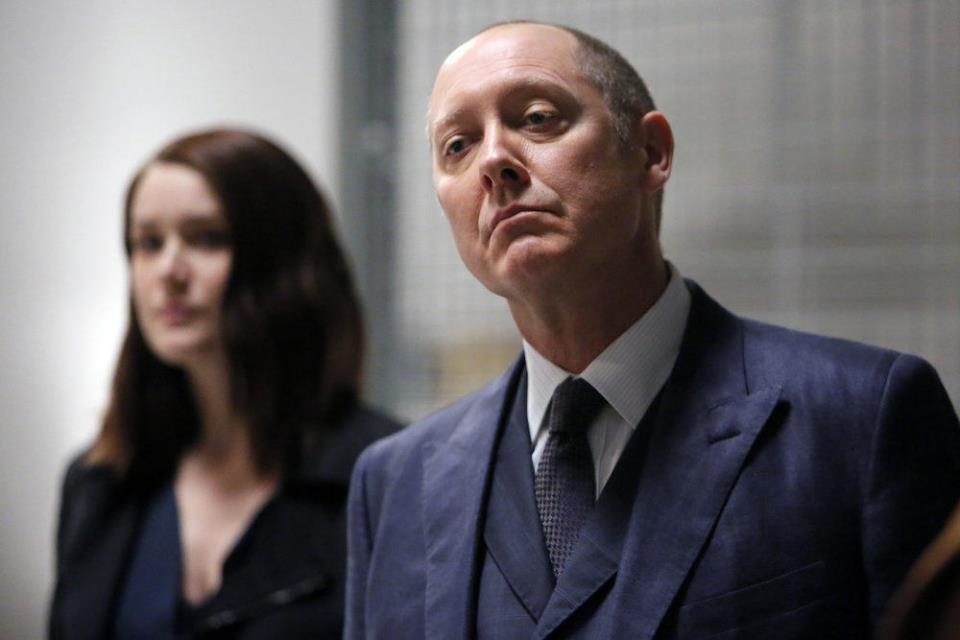 Deception and double-crossing dominated Thursday’s episode of The Blacklist, even more so than usual.

The other part of Red’s ruse is a very public display of a feud between him and Liz (Megan Boone), which they openly discuss within Kirk’s unseen earshot. And sure enough, Kirk responds by reaching out to Liz. But while it’s all for show on Red’s part, there’s quite a bit of truth behind Liz’s words when she tells Cooper (Harry Lennix) that she’s “done cozying up to that snake.”

So who’s Kirk’s source? Well, no sooner does Aram (Amir Arison) give a big speech to Samar (Mozhan Marno) about not being able to figure out why his girlfriend Elise (Annie Heise) is with him, both of those mysteries are solved. Elise is a member of a hacker group known as the Thrushes, and she’s been hired by Kirk to infiltrate the FBI via Aram. He’s crushed by the news, but wants payback and offers to execute his own hack on Elise’s computer.

During the most uncomfortable dinner date ever, Elise discovers that Aram’s trying to plant software on her laptop, and after a violent struggle, she’s arrested. The FBI makes her call Kirk’s henchwoman to reassure them that her information has not been compromised and everything is still going according to plan. And, after hearing Aram give a suspicious Elise a pretty convincing story about how he’s in love with another woman, Samar rescinds her request to transfer.

So Liz has to choose between keeping Kirk out of jail so that she can get some answers from him about her background, or sending him into a trap in order to rescue Agnes. She chooses the latter.

Against the advice of his henchwoman, Kirk apparently trusts “Masha” completely at this point, so much so that he believes she won’t tell Red the revised location of their meeting. He sets a trap for Red at their original rendezvous point, but Liz is still playing both sides for now. Right as Kirk’s about to hand Agnes over to her, Red and his team burst out.

And so the Keen family is reunited at long last, and even Uncle Red gets to come in and say goodnight to Baby Agnes in her crib. (Though Liz is desperate to regain memories of her childhood, something tells me Agnes may want to work to forget hers.)

Also in great danger? Mr. Kaplan (Susan Blommaert), who is indeed still chained to that bed in the creepy log cabin. It’s still unclear what her captor wants with her, but he’s a wily one. He catches her in a lie when she tries to tell him she went into the woods alone in order to attempt suicide, a story she made up to reassure him that no one will be looking for her. But he retraces her steps and checks the images on the motion-activated cameras he’s strategically hidden around the woods (!), which show her getting out of the car with Red and Dembe (Hisham Tawfiq). On the one hand, it seems like he’s just wanting some company; but he also tells Mr. Kaplan he doesn’t like visitors, or cops snooping around. In short, she’s in a real pickle.