The Opus#3 comes with a nice and clean / minimalist looking box. You can see the name of the product on the upper corners of the sleeve; and at the back is the specifications table. Removing the sleeve reveals a blue box; also with a logo on it. Remove the top cover to finally see the Opus#3, already protected with a screen protector right out of the box. Don’t worry, there’s an extra screen protector included.

The accessories are located under the Opus#3. The packaging includes a USB cable for charging and data transfer, some reading materials and an extra screen protector. The Bit informed me that the leather case is not (originally) included in the packaging. However, MusicTeck is including the leather case in the package at no additional cost. To be honest, I would prefer that DAP manufacturers would include a leather case, considering the amount of money you would spend on their product. Also it would be nice if DAP manufacturers (not limited to The Bit only) would include a wall charger and not just the USB cable. 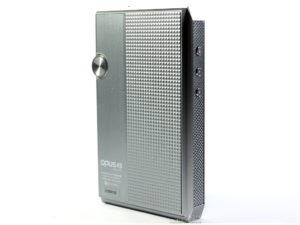 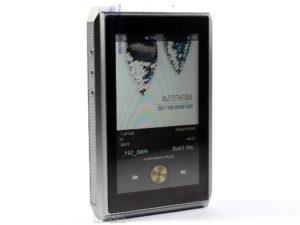 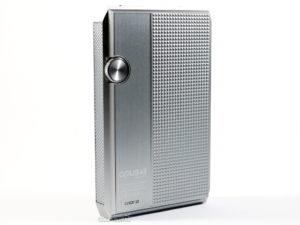 The Bit Opus#3 looks uniquely different compared to the Opus#1 and Opus#2. It features a metal body design (although not all-metal) and has a small volume wheel at the back; very similar to the AK Jr and AK 300 series DAPs. The body is indeed made of aluminum metal; however those stylish and beautifully sculpted pyramid textures are not made of metal. Although, it doesn’t feel like plastic when you touch it and it blends naturally with the rest of the metal parts. In fact, I didn’t realize that it was plastic not until I knocked on the back portion. You’d know that it’s not metal since the sound of a metal is different from a plastic when you knock on it.

According to The Bit, it was difficult to make the pyramid design using metal; and if they pursued using metal, it would increase the price (probably significantly) adding no value at all. For me it’s no big deal really, since I wouldn’t feel that anyway once I insert the Opus#3 on its leather case. However, if you don’t want to use the leather case (or you don’t have one), be mindful that the back panel is plastic and you definitely don’t want to bump that portion really hard. 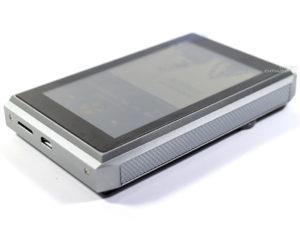 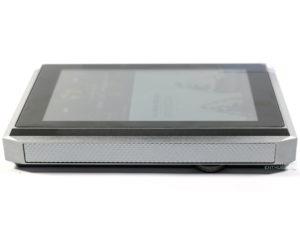 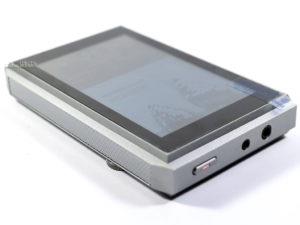 On the top portion of the Opus#3 you can see the power button, a balanced 2.5mm output, and a 3.5mm headphone out that also serves as a 3.5mm optical out. On the bottom portion, there’s the microSD card slot and micro USB port. There’s nothing on the right hand side, except for the volume knob at the back portion. 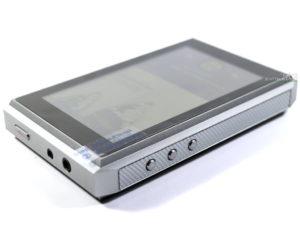 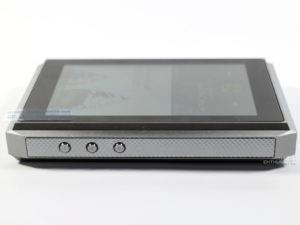 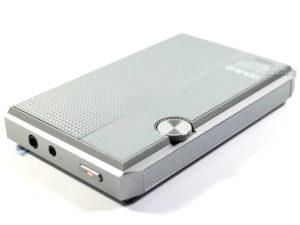 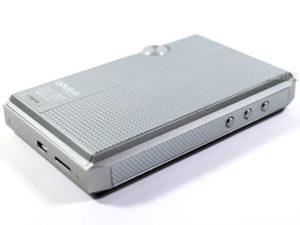 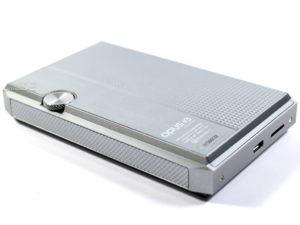 On the left hand side, there are three buttons namely: next, play/pause and forward. You can see from the back portion the small volume knob, to which I think the size or diameter of the wheel is just right. I like how the volume knob was position since accidental increase/decrease of volume is less likely to happen. But I do wish there is an option to disable the whole screen overlay whenever you adjust the volume. Or at least make a small slider instead, and not an overlay on the whole screen. There is a second or two delay before the volume overlay closes. I find that a little bit annoying, to be honest. It’s also present on Fiio’s X5 III and Cayin i5 as well.

This is going to be just a short and initial impression. I got the unit last week and I haven’t spent much time yet listening or burning in the Opus#3. I’m currently testing the new Ryzen system side by side as well, so yeah listening to some music while benchmarking at the same time.

Right of the bat, after a few seconds of listening to “Geralt of Rivia” from the Witcher III OST, one of the tracks I listen to very often or frequently specially when comparing gear; I immediately noticed a difference compared to the other DAPs I have (Cayin i5, Opus#1 and X5 III). The sound is warm as expected from a BurrBrown DAC chip. Probably, similarly warm compared to the X5 III. But the sound is very clean and natural, somewhat similar to the Opus#1. The sound stage and layering is noticeably different, and by different, I mean wider soundstage and probably better layering. I’m using UM’s Miracle V2 and CA’s Andromeda, by the way.

Like I said, I don’t have an Opus#2 on hand, but I’m more positive that in terms of sound performance the Opus#3 sits in between the Opus#1 and Opus#2. The user interface is overall smooth flowing and easy to use, and the addition of wireless connection is definitely a step up from the Opus#1.

By the way, it does support 3rd party applications and you can install 3rd party apps; but not via Google Play Store. You will have to download the APK file and copy it to the internal storage of the Opus#3. Below are instructions from The Bit (click to enlarge).

Do note that not all 3rd party apps are supported and interacting with 3rd party apps is very limited at least for the current firmware. I was able to install some simple apps and a modded Youtube app; however there’s no easy way to fully close the 3rd party app. And once you go full screen or landscape view, there’s no way to return in normal portrait view not unless you restart or turn off/on the Opus#3.

That’s it for now, I’ll need more time to test and compare the Opus#3. These are just my initial impressions, and I’ll update this when the final review is up. Stay tuned!