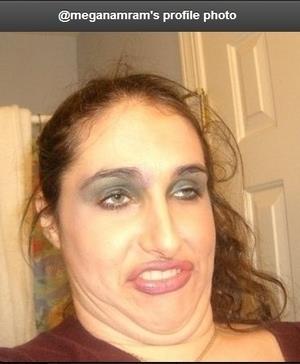 Unless, you suffer the same mental illness that I do, right now you’re thinking “what is an Amram?” Well, according to my deficient mind, an “Amram” is a deliberately ugly profile pic. Y’know, making a funny, unattractive face. That’s probably because I follow the delightful Megan Amram on Twitter whose pic looks like this:

Now, a normal person would have said, “Oh, look, this person named Megan Amram is making a silly face.” But I just assumed Amram was hip Internet lingo. (She’s in L.A. and has many more followers than I, so I just assumed I was out of the loop.) It didn’t help that a friend of mine also used the term “Amram” in conversation — because apparently mental illness is contagious.

Take-Away Message: I don’t really have one. But I think it would be great if we all started calling deliberately ugly photos “Amrams,” because then I wouldn’t be alone in my stupidity. And if the Internet is good for one thing, it is sharing and spreading ignorance.

Watch the new HATE BY NUMBERS, where Will.i.am of the Black Eyed Peas recruits Britney Spears to make even worse music.

Also, be sure to follow Gladstone on Twitter and stay up-to-date on the latest regarding Notes from the Internet Apocalypse. And then there’s his website and Tumblr, too.