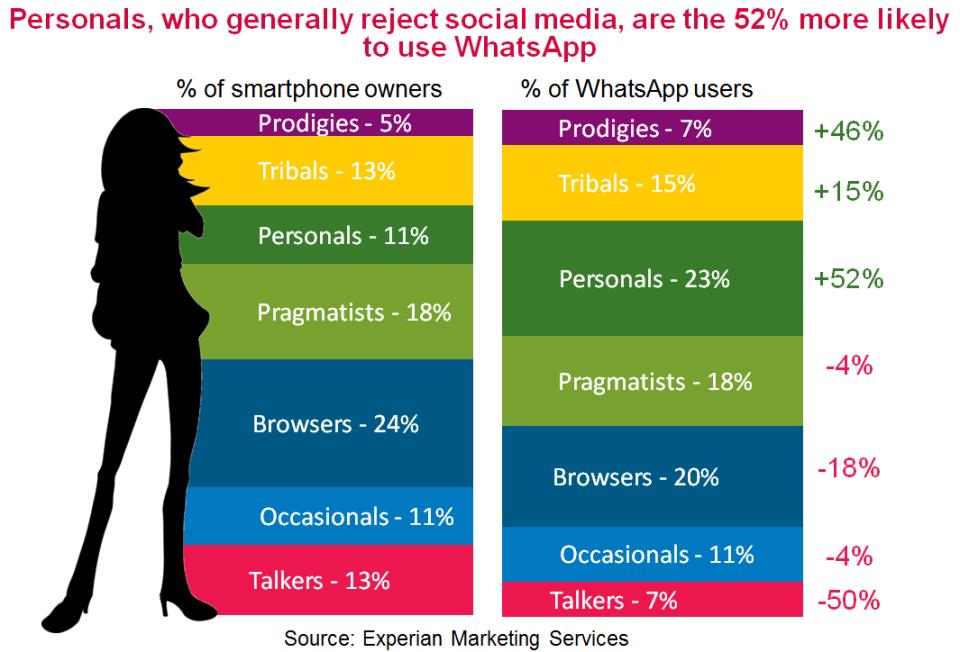 So Facebook just announced that it will be acquiring messaging app WhatsApp for an astounding $19 billion and that’s probably a pretty smart move given new insights from our Always-On Consumer Report. The report, which profiles seven distinct segments of smartphone owners defined by their attitudes and mobile behaviors, found that 11 percent of adult smartphone owners fall into an important segment that we call Personals.

Personals are mobile-savvy consumers with many having come of age during the mobile revolution. But unlike other leading-edge mobile segments, Personals are increasingly cutting out social media or are at least less likely to embrace it when it comes to keeping in touch and communicating with friends; they generally prefer to connect with others directly instead. And that’s a problem if you’re Mark Zuckerberg.

Mobile messaging apps like WhatsApp, not Facebook, are the darlings of this set. In fact, Personals are 52 percent more likely than the average smartphone owner to use WhatsApp during a given month, making them the app’s most likely users. Facebook’s acquisition of the WhatsApp, which reportedly had 450 million active users worldwide at the time of the announcement, gives Facebook access to a growing segment of consumers who are less enamored with social media Zuckerberg would prefer.

So now it’s clear why Facebook bought WhatsApp, but what do we know about their users? Leveraging our latest Simmons Connect study, which links in-depth consumer lifestyle, attitudes, behaviors, brand preferences and more to their complete cross-channel media habits, including smartphone behaviors, we can better understand who WhatsApp users are and what motivates them. 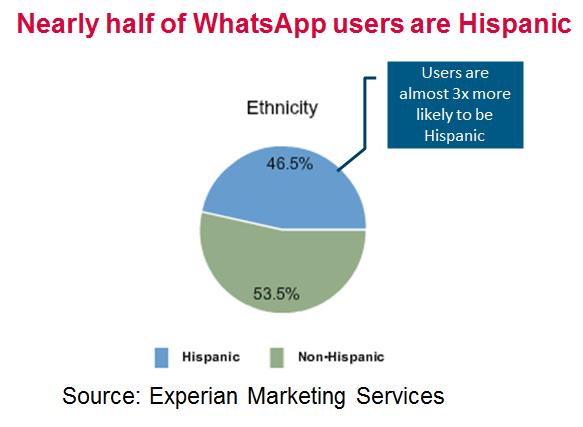 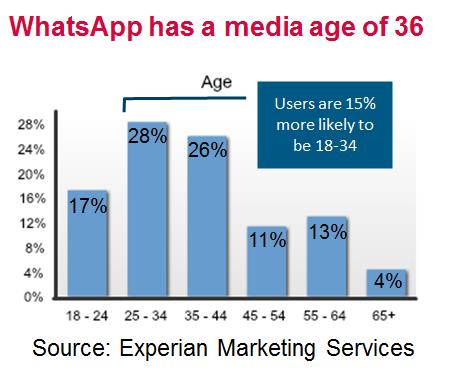 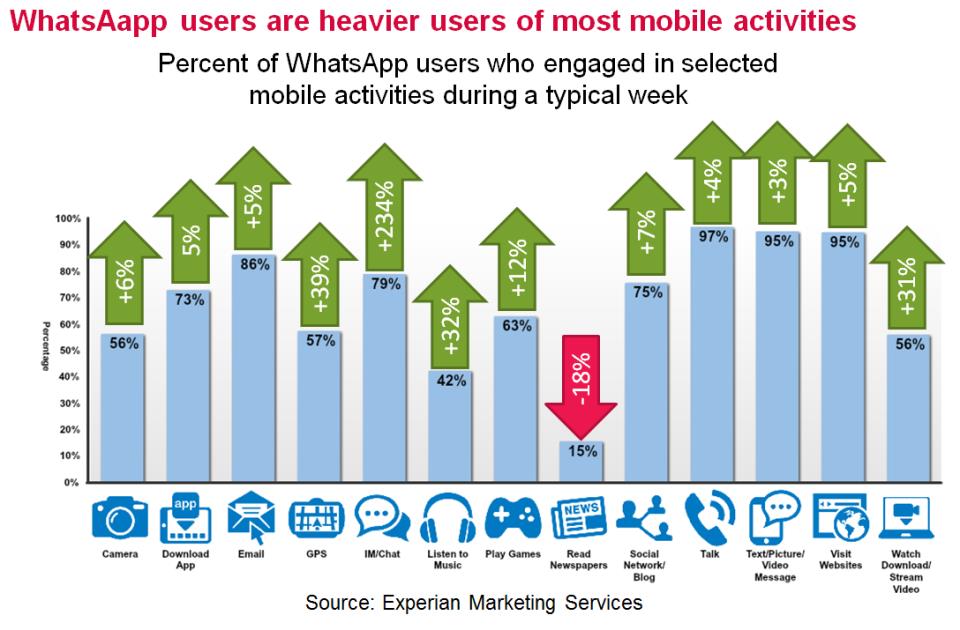 Note: Arrows indicates the percentage more or less likely that WhatsApp users are to engage in the activity during a typical week than the average smartphone owner.

WhatsApp users access most mobile apps at above average rates with mobile messaging apps indexing the highest. In fact, WhatsApp users are nearly nine times more likely than average to use Viber, 7.2 times more likely to use Line and four times more likely to use Skype. With so many users also accessing other mobile messaging apps, Facebook must ensure WhatsApp users that the app will not become “Facebook-ized” sending users (and their $19 billion investment) running off to competitors. To the company’s credit, that’s one of the first things they did, with Zuckerberg specifically saying via Facebook post (what else?): “WhatsApp will continue to operate independently within Facebook. The product roadmap will remain unchanged and the team is going to stay in Mountain View.”

Other apps that have especially high concentrations of WhatsApp users including: Dropbox, Google Translate and mobile banking apps Chase One Mobile and Bank of America. 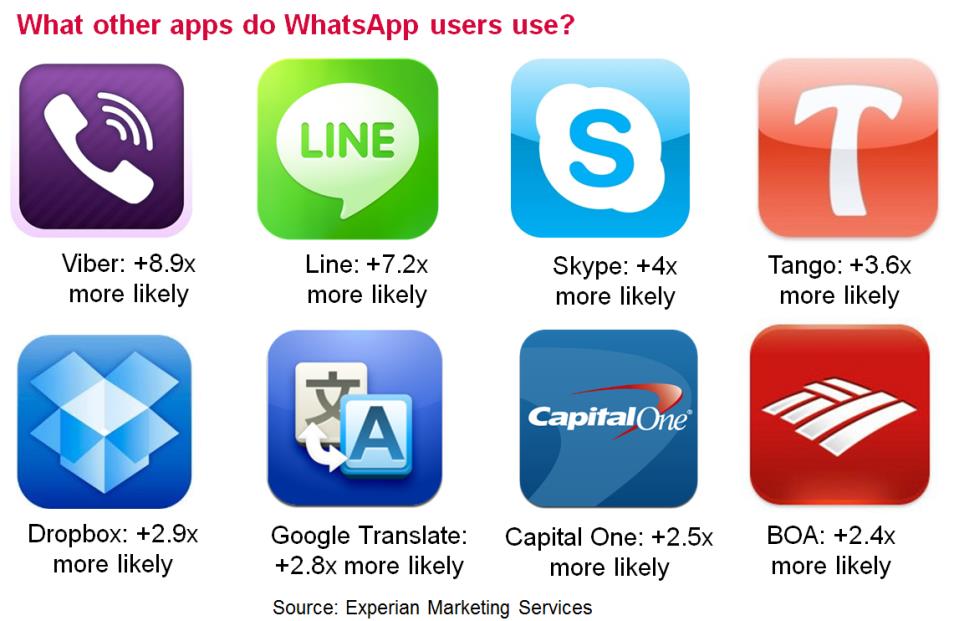 By now you have a better idea of who WhatsApp users are and what they do and when you learn how they think it becomes even more apparent why Facebook paid roughly $42 for each of WhatsApp’s 450 million users. For starters, while WhatsApp has always pledged to be free of advertising, its users are 44 percent more likely than the average smartphone owner to be interested in receiving ads on their phones.

Whatsapp users are 44% more likely to be interested in receiving ads on their phones.

While that doesn’t give Facebook carte blanche to just start including ads (see above promise to keep WhatsApp independent), it does mean that they may have some opportunity in the coming years to explore revenue models that would allow some users to receive ads through the app. Campaigns that connect users to celebrities might be especially effective since WhatsApp users are 47 percent more likely to say that they like to use the same products that celebrities use.

Should advertising become an option, WhatsApp users are a highly attractive group that many marketers would love to reach. Besides their youth, users are also early adopters saying that they are always the first among their friends to have the latest electronics and gadgets. They like to stand out in a crowd and they really enjoy shopping. Like many tech-savvy consumers, many WhatsApp users say the Internet has become their primary source of entertainment and they usually carry multiple mobile devices with them. One thing they don’t generally do on any device though is click on links in social media. And that, my friends, brings us right back to where we began and why Facebook made the acquisition. Nicely played, Zuckerberg. 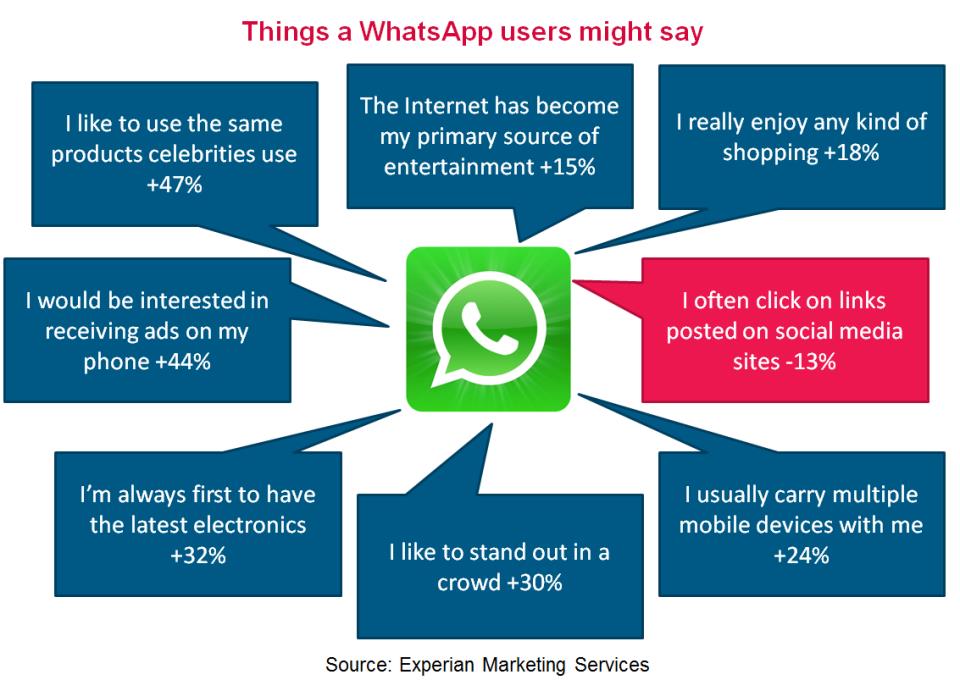 For more information about mobile consumers, including Personals, download The Always-On Consumer Report.