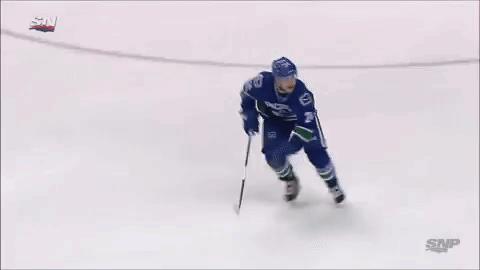 This is what the Canucks are this year. This is how they win games.

Some people find these games exciting (honestly, people debate this with me).

If you watched tonight’s game and said “Yes, now THAT’S hockey!” either due to your love of the Canucks, you actually liking low event hockey, or you’re just really good at lying to yourself, then all the more power to you. I say that honestly without any snark.

But when you write about the team and then glance over and see Pittsburgh and Washington going crazy, and realize you’re about to make a gif about Reid Boucher landing a hit, part of you dies inside.

However, the Canucks did get two points tonight by defeating the Predators 1-0, and for all those “just get in and see what happens!” supporters, this was another step towards a possible playoff berth.

Let’s break this game down, shall we?

Hey, there’s that Reid gif I alluded to earlier!

1 period was enough for you Reid. 4th line you go. #Canucks

Yes, Boucher ended the game with  6:04 of ice time. He had a brief spell on the second line to start the game, before being dropped to the fourth.

The Canucks won the game, and Boucher is a waiver wire pick up, so it’s not a huge controversy. Just something to keep an eye on, to see if he ever gets a shot at that sweet Megna ice time.

As for breaking down Boucher’s play, again, it’s tough to tell much in the limited ice time, in a low event hockey game. It would be nice to see him get some power play time due to his scoring prowess in junior, but when only two penalties were called all game (low event hockey was almost no event hockey this game) it’s understandable he didn’t get a look yet.

Of course the only reason he got into the game was because Megna had the flu, so his spot in the next game is far from guaranteed.

Not everyone can capture Willie’s heart like Megna Man can, you know?

In what was the most bizarre play of the game, the Predators looked like they had gone up 1-0 after whacking at Ryan Miller like he was a pinata at your little cousins birthday party. Lots of whiffs and misses until eventually Ryan Miller exploded.

sure looks like he was going to blow the whistle. yeah … no. guy couldn’t be more excited about this goal call pic.twitter.com/PK5CSZKyzE

The ref? He looks stoked to call this goal. He looks like he’s been waiting his whole life to call a goal like this. He looks like all he did last night was practice hanging off of furniture just in case he had to jump on the net to try and spot a goal.

“Oh my god Bartholomew, this is your time to shine!” (I don’t know why he calls himself Bartholomew).

So the puck goes in, he starts pointing at that puck in a way that would have made Mick McGeough proud.

Ryan Miller gets mad. He’s pissed. He’s so angry it’s like he walked into his room and found out his mom had gone through his drawers.

So he screams at them. Demands an explanation. Hell, he even starts throwing shit around. 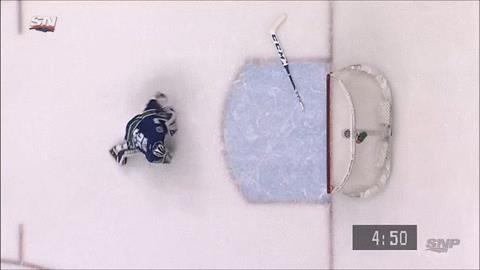 The refs, they get together. They start talking. They decide to go upstairs. Why? We have no idea.

So they start talking upstairs. We wait. We keep waiting. We wonder why they’re going upstairs. Did someone kick the puck in the net?

So we watch the replays. John Garrett says something about something he’d love to put ketchup on. Normally we’d get together and laugh about this, but not tonight. Tonight we have more important things to do.

We keep waiting. We keep debating. “Maybe the refs can’t remember the number for front office so they’re dialing every number, starting at 1.”

Five and a half minutes later, FIVE AND A HALF MINUTES (That’s 1/4 of a period, that’s one awkwardly long conversation on the bus with the guy carrying bags full of cans, that’s a long ass time) later, the call comes down.

Since we’re Canucks fans, we brace for the worst. Yet part of us wonders.

“We’ve actually gotten some of these calls recently. What’s this weird thing flowing through my body…is…is that what they call ‘hope’??”

Ref makes his decision. No goal

“Intent to blow the whistle.”

Intent to blow the whistle?! What?! ? That just sounds ridiculous… https://t.co/DJRReuPUGD

Why did they go upstairs to decide that?

We’ve seen this rule in the past. Refs can arbitrarily decided they meant to blow a game, I mean whistle, and then boom, it’s done. You don’t go upstairs to ask the league if they somehow knew what you were thinking.

Ref (and his arm): Good goal

It was bizarre. Why? Why would that happen?

Then Sportsnet’s Irf comes to the rescue. His past history playing Carmen Sandiego kicks in, he goes investigating. He knows which country uses rubles so off he goes, he finds out why it was no goal:

NHL explanation on the no-goal in the first period. #Canucks #Preds pic.twitter.com/jJMXGjwwzz

If the ref decided he meant to blow the goal off, why did they go upstairs for five minutes?

If the ref meant to blow the whistle, why did he celebrate like he just got appointed Grand Master Pointer Dude?

Did he just get caught up in the moment? He was so excited to point out that the puck had gone in the net, that he forgot he was going to call the play dead? Then he spent five minutes talking to the NHL front office about his favorite work out playlist?

Why did it take five minutes to decide this??

3. Hail to the Tryamking, baby.

Tryamkin is awesome to watch. He truly is.

We’ve seen him get better and better each game, to the point where we have no idea what his limit is.

They want him to rush the puck more? All of a sudden he’s leading two on ones and trying to finish off Sedin tap ins against New Jersey.

They want him to be more physical? All of a sudden he becomes The Hammer, and starts destroying any Predator he sees tonight.

So the excitement over him shouldn’t be “Well clearly he is the next Chara.” it’s more “Holy lord, a player that does exciting things that don’t  hurt the hockey team.”

Like tonight. He’s not going out of his way to land big hits that take him out of position. Tryamkin did his calculations. He made sure his hits were precise.

That’s exciting to see on a team of low event hockey, as RockEyeRoll said to me.

Let’s take a look at the carnage, shall we? 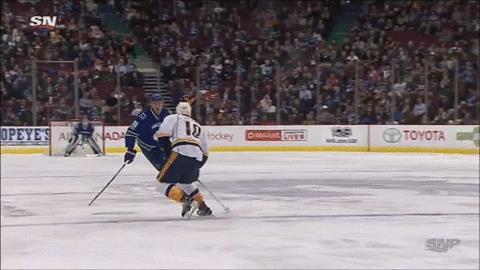 Tryamkin is so good with his long reach that most times he doesn’t do the big hits. That has been the one thing people have been hounding him about.

“You’re so big, brah, start murdering people out there.”

And yeah, you see a big guy, you can’t help but wonder “Cool, he’s big, but can he maim people…”

We’ve seen Marek Malik. We know being big doesn’t mean you’re a killer. We don’t know if Tryamkin is a Malik or not. Tonight was the first night he put together a package of hits that made you think “Oh snap, we might have a beast on our hands.” 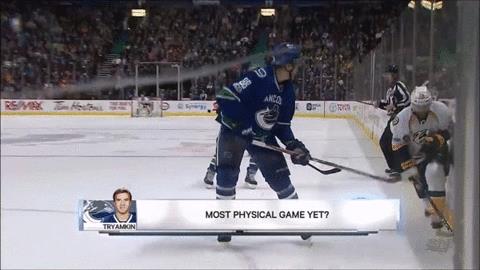 Another play, boom, let the bodies hit the floor. He cuts off the Predator. Then he ends him. 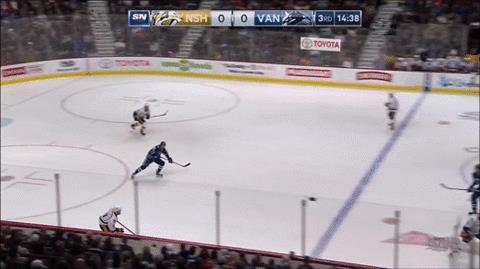 Let the bodies hit the floooooooooooooor. In a tight grueling game like this, this is the kind of stuff that wears your opponent down. And makes them slightly afraid to go near you. Make you second guess how badly you want to retrieve that puck.

It’s the kind of thing Gudbranson was supposed to bring, quite frankly.

It wasn’t all hitting, though. Tryamkin showed off his smarts by forgoing a risky outlet pass, and instead turned around, rushed the puck up the ice, and making a great outlet pass: 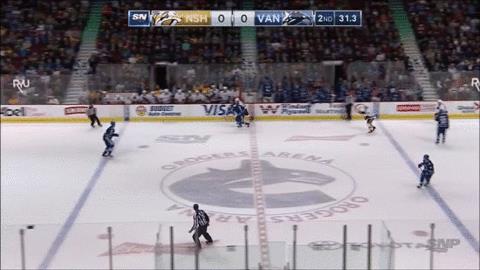 This is the kind of thing that makes you have some kind of hope for this team.

And that wasn’t all. Tryamkin is also one of the most helpful players on the team. Brandon Sutter goes down in pain after blocking a shot? Tryamkin helps push him to the bench.

A linesmen gets hit by a puck and gets hurt? Tryamkin is the first one to grab the trainer and walk him over. 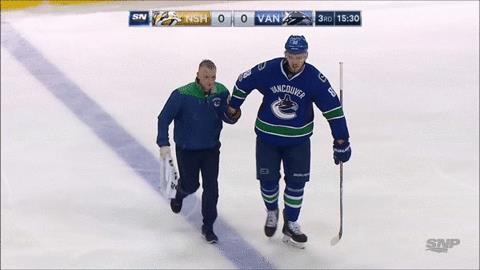 Hail to the Tryamking, baby.

Before the game we found out Megna had the flu, and that Stecher was sick as well.

Nope, Stecher gets the call.

And I get it, players don’t like to sit out games. Especially rookies who want to cement their spot. Players who want to prove how they can play through anything.

Except Stecher is so sick he only gets 11 minutes of ice time. His ice time gets very limited after the first period.

On one hand you can make the jokes “I’d take a sick Stecher any day of the week over Pedan!” but on the other hand, why risk it?

Pedan can probably handle those 11 minutes. Stecher can heal up faster by resting. He can not spread his germs on the bench.

Why not just play Pedan?

Remember, this is the same coach who saw Hutton get hurt, and decided to roll the dice that he’d be able to play the next game.

Hutton could not play the next game, and that was the game an injured Rodin played zero minutes, as the team once again went with five d-men.

It just seems so unnecessary. 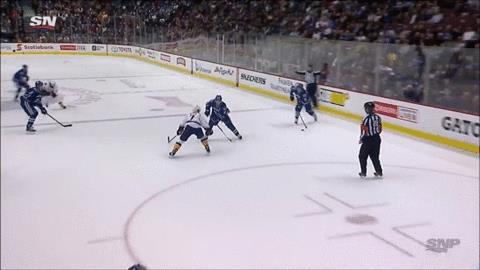 The word count is getting dangerously high, so let’s just quickly point out that the game winner was Henrik getting his 999th career NHL point.

Yes, he did it by passing the puck into the net.

Word came out today that Rodin’s knee is indeed hurt, ending the fun game of “wtf, is Rodin injured or not??”

There will be many days of speculation over this, however. When did Rodin hurt his knee? Did he rehab correctly? Did the team push him too hard in pre-season? Did Rodin push himself to hard? Will Rodin get another shot? Will the team want to re-sign him if he doesn’t?

It always felt like Coach Willie maybe didn’t care for Rodin, but maybe it was the knee injury all along. Maybe Willie was trying to shelter Rodin. We just don’t know right now.

What we do know is that the game he supposedly hurt his knee in again, was January 6th, against Calgary. The next game was the one he dressed and played no minutes. Regardless of what happened, that’s not a great optic to have an injured player in a game sitting on the bench, in a game he wouldn’t even be able to play in.