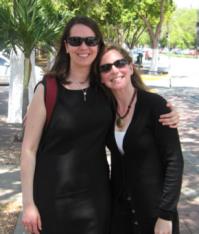 The Gender-Based Violence Topical Interest Group formed in 2007, and we have had the privilege of organizing sessions at the annual Society for Applied Anthropology meetings around this issue for the past several years. The 2014 meetings will provide an unprecedented opportunity for gender-based violence scholars to share their research and network with each other.

As co-chairs of the TIG, we are simultaneously astonished and equally pleased at the growth of the TIG. From our humble beginnings, where Jan Brunson was the only member in attendance at our 2009 meeting, to 2013 with over 100 different members attended our sessions and TIG meeting, the GBV-TIG has strived to be a welcoming and inclusive group to foster collaborations, support, and friendship for students, practitioners and teachers alike. The lineup for the 2014 panels devoted to understanding and ending gender-based violence is impressive and brings together the greatest range of topics and perspectives to date.

The two days of panels bring together case studies from China, Mexico, Malawai, Brazil, the United States, Afghanistan, Kenya, and Guatemala. Scholars are addressing such issues as refugee status, food security, trafficking, child abuse, abortion, medical and other health encounters, HIV, and courtroom dynamics, to provide just a sample of paper topics. This incredible range of issues and case studies demonstrates how far the study of gender-based violence in anthropology has come since the initial papers offered by Dorothy Counts and her colleagues at an Association of Social Anthropologists of Oceania meeting back in 1989. What is exciting from the standpoint of the TIG is how many new members are joining the panels and the institutions they represent. We have this year with us undergraduate and graduate students, as well as university faculty at the assistant, associate and full professor level. We have practitioners and NGO activists, and the institutions represented range from community colleges, and professional schools to research universities and liberal arts colleges.

In addition to the four formal sessions, the TIG has also organized a wrap-up session and a TIG meeting for members and interested conference attendees to meet up and network. We hope these sessions and opportunities for discussion will lead to collaborations and collegial relationships that allow our scholarship to have a wider reach.

Lastly, an additional session that may be of interest to TIG members and other scholars interested in gender-based violence is the panel devoted to an overlooked topic in the anthropological literature: martial rape. Gabriela Torres and Kersti Yllo are hosting a session entitled “Developing Cross Cultural Approach to the Study Sexual Violence in Marriage.” Based on work that developed during a Wenner-Gren sponsored symposium in May 2013, papers in this session explore the cultural, legal, and medical aspects of sexual violence that occurs within marital relationships. Hillary and I will be presenting our current work that situates rape in marriage within the gender-based violence literature.

We believe that the Albuquerque meetings will be a pivotal time for establishing agendas for the future of gender-based violence research in anthropology and the applied social sciences.