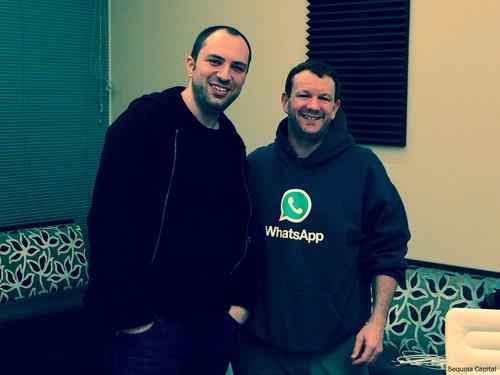 Earlier today, Facebook announced its acquisition of WhatsApp for $16 billion. It’s a spectacular milestone for the company’s co-founders Jan Koum and Brian Acton, and their remarkable team.

This approach has served WhatsApp well and its users better. WhatsApp has done for messaging what Skype did for voice and video calls. By using the Internet as its communications backbone, WhatsApp has completely transformed personal communications, which was previously dominated by the world’s largest wireless carriers.

Those less familiar with WhatsApp and its wonderful product will marvel at how a young company could be so valuable. Many of those people will be in the U.S. because there’s no other home grown technology company that’s so widely loved overseas and so under appreciated at home. WhatsApp reminds us of other companies that we partnered with – like PayPal, and YouTube – whose founders chose a similar path to Jan and Brian. Today PayPal and YouTube are both household names around the world. Tomorrow the same will hold true for WhatsApp.

450. WhatsApp has more than 450 million active users, and reached that number faster than any other company in history. It was just nine months ago that WhatsApp announced 200 million active users, which was already more than Twitter. Every day, more than a million people install the app and start chatting, and they remain more engaged with WhatsApp than on any other service. Incredibly, the number of daily active users of WhatsApp (compared to those who log in every month) has climbed to 72%. In contrast the industry standard is between 10% and 20%, and only a handful of companies top 50%.

Jan and Brian’s product caters to those you care about most: the people in the address book on your phone. WhatsApp is simple, secure, and fast. It does not ask you to spend time building up a new graph of your relationships; instead, it taps the one that’s already there. Jan and Brian’s decisions are fueled by a desire to let people communicate with no interference. 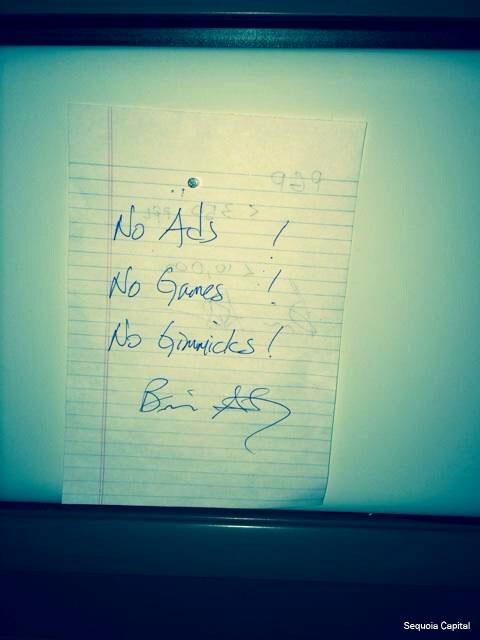 1. Jan keeps a note from Brian taped to his desk that reads “No Ads! No Games! No Gimmicks!” It serves as a daily reminder of their commitment to stay focused on building a pure messaging experience.

It’s easy to take this novel model for granted. When we first partnered with WhatsApp in January 2011, it had more than a dozen direct competitors, and all were supported by advertising. (In Botswana alone there were 16 social messaging apps). Jan and Brian ignored conventional wisdom. Rather than target users with ads – an approach they had grown to dislike during their time at Yahoo – they chose the opposite tack and charged a dollar for a product that is based on knowing as little about you as possible. WhatsApp does not collect personal information like your name, gender, address, or age. Registration is authenticated using a phone number, a significant innovation that eliminates the frustration of remembering a username and password. Once delivered, messages are deleted from WhatsApp’s servers.

Facebook has assured Jan and Brian that WhatsApp will remain ad free and they will not have to compromise on their principles. We know that Jan, as a new member of Facebook’s board, will continue to champion the rights of WhatsApp users.

From the time WhatsApp had fewer than ten users, Jan and Brian have been committed to building an enduring service. Now, on their way to a billion, they are just getting started.