India has a huge market for Type phone which many of you would not believe and probably will put it in smaller segment but that’s really far from true. Looking at tons of questions we received for Nokia 301, which is an incredible type phone and with good camera, we were sure that Nokia 208 should do well in the market as well. In this review I have used a Dual SIM Nokia 208.

This phone has practically no difference from 301 but they do different at some points one of which is using this as USB Modem. Since the phone supports 3G, you can speed up your browsing with this which one of the recent type phones has to offer. In one line if I have to say, it’s a lighter version of Nokia 301 but with same pricing.

Disclaimer: This review includes feedback from my Mom  which loves to use type phone. She is in-fact a perfect real world user for feedback on feature phone.

Watch on YouTube |You can buy  Nokia 208DS from Flipkart.com | or Amazon India

The phone display was legible when used in sunlight ( bot don’t compare it with Clear Black Display) and that’s what you should know. I was able to read emails and text in bright day. Apart from that technically speaking  the phone houses a 2.4 inch LCD Transmissive with 320 x 240 resolution and 166 PPI.

The build of the phone disappoints me a little because its feels low quality because of the candy look. Nokia has tried the curvy looks with the phone but it is not working well with the experiments I did. As an example, when given a choice between Nokia 208 and Nokia 301, 8 out of 10 people chose 301 because of its elegant look and build quality.

The back panel is pretty thin but when placed correctly on the phone makes sure to keep away dust and water from the phone.  The curvy edges give a better grip but if you have big hands you might not even feel the phone to be there. 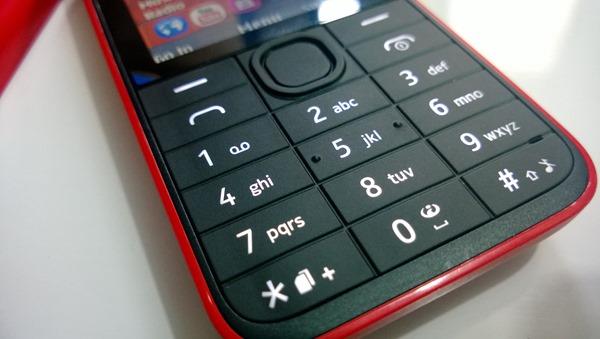 One thing I like a lot about Nokia 208 is the keyboard. It is easy to press with better feedback and the unibody layout makes sure to keep the dust off. Even after using it since 10 days now, there is no sign of wear and tear. This clearly shows that the quality of keypad used is premium. Nokia 301 keyboard are separate buttons and they are pretty hard to press.

Similar to Nokia 301, Nokia 208 has an impressive battery live. Flat 4 days when used only for calls and with no internet usage.  Even after hours of calls, mom managed to keep it alive for long hours. 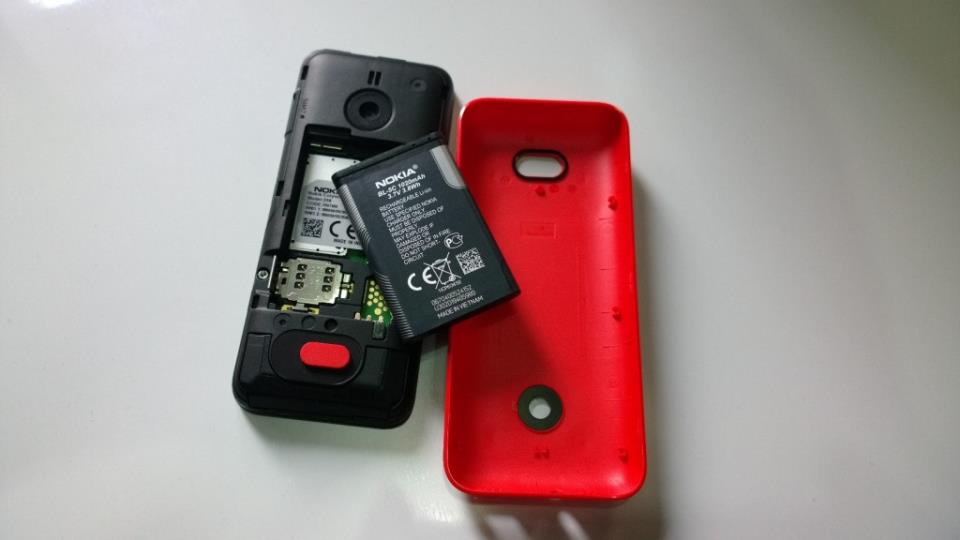 That said, there is no internet usage here. So when I actually started increase the usage by using:

the battery lasted only 2 days which in my opinion is pretty good, keeping in mind most of the smartphones don’t survive for more than a day.

The phone can be connected to your PC as USB storage which gives you direct access to copy and paste files. It also includes a Bluetooth 3.0 for easy file transfer and works with most of the Bluetooth headphones. You also have an audio jack in place.

You can use two micro SIM in this model and it has to be placed right under the battery. Both the slots are for Micro SIM of which the SIM 1 can be used for 3G and 2G while SIM 2 can only be used for 2G. SD card slot is also available under the battery and exactly opposite to the second SIM slot. 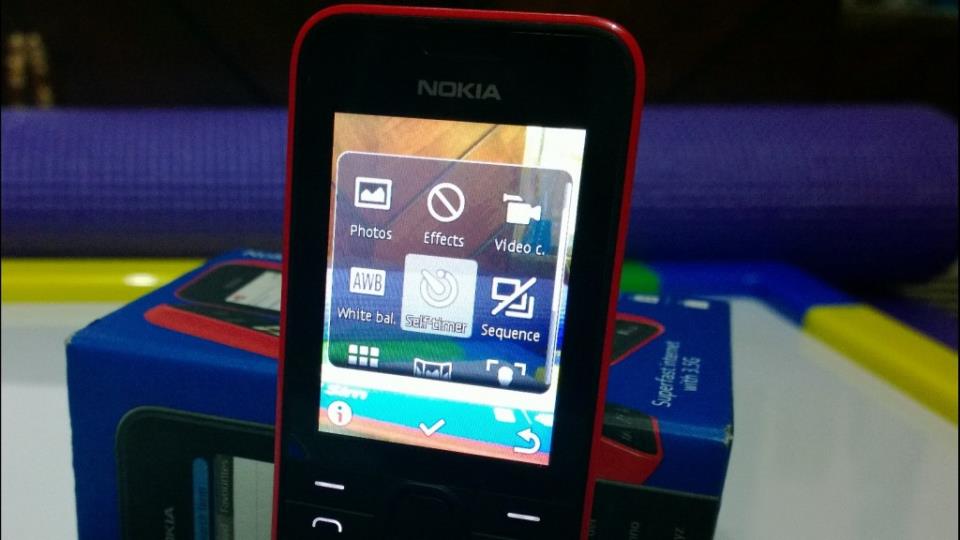 Even then, Nokia made sure that it does the same software 301 had and let people do things which is not in possible on other phones with this kind of camera.

Here features to impress you:

That said, if you have this phone, you may click to capture some moments but don’t expect in terms of high quality and good low light pictures.

The phone software is exactly the same as Nokia 301 — S40. So, if you have ever used a Symbian phone you wont find much of difference.  However in this review I am answering some questions you also asked in 301. 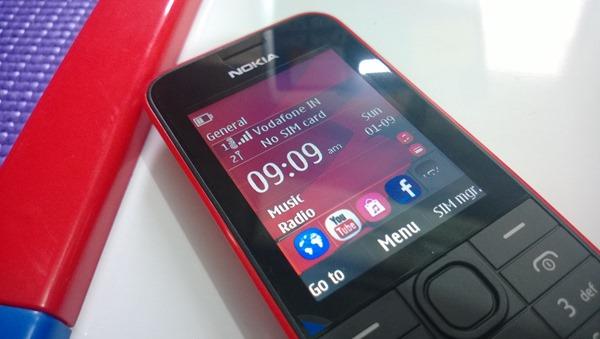 Apart from this you also have :

Note: You will have to ask questions here to know more

The phone has no issues when used for long hours on voice calls. The sound is crisp and clear. When tested in party like environment, Nokia 301 is better performer.

Nokia Ovi Store has been thee for ages and most of apps you are looking around for is available. You will have to use a Nokia account to download them and keep them updated.

That said the OS comes with Nokia Express browser for speedy browsing.  The browser gives you access to History, Featured and Favorites. Since you are limited by the screen size, I am sure most of the time you will be using will be when you have no other choice. Depend more on apps than on browser. Any app which is paid, can be bought using your mobile operator which is charged from your account.

The phone performs satisfactory when it comes to using it for music.  The curve design make sure the sound is not blocked from anywhere and the default Nokia music player can just play most of the music format including MP3 which most of us will be using.

When used with ear phones on, the sound quality is pretty good but when used over speaker on full volume, you might not like it because the bass just gets out of control losing its audio clarity. 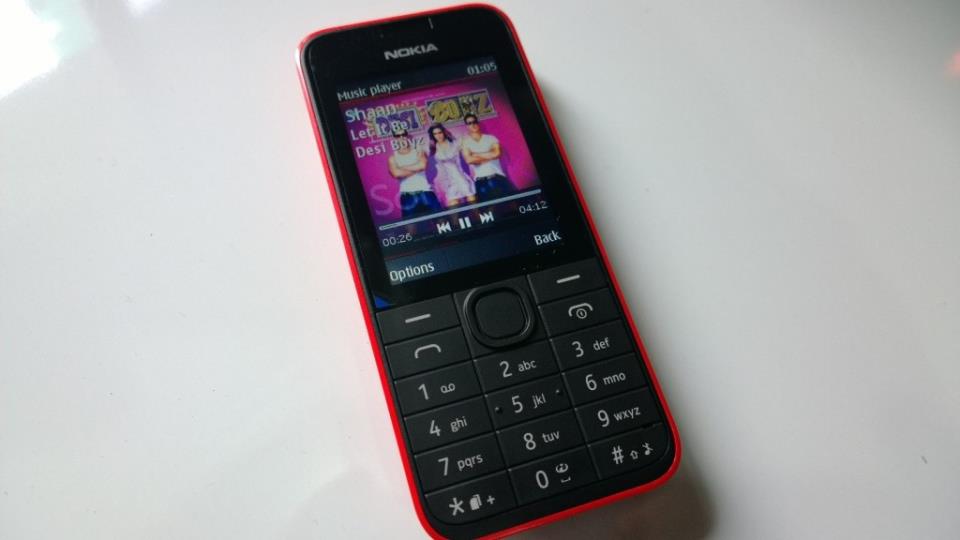 The phone also supports Radio which we all love in India and best part is that it can record the FM channels as you listen to it. You will be able to play it later anytime.

The phone only houses 190 MB of free space and if you are music buff, get micro-SD card to carry your music without worries.

Note: I am keeping out the video part which really makes non sense on such a small screen but if just want to know make sure to watch the video.

Even though the phone is almost on same level as Nokia 301, it’s priced more than what it should have been. Nokia 301 has its own advantage of  better camera and build while Nokia 208 supports Internet sharing and lacks both in camera and overall build quality. I would expect the price to drop down to 3.5K while it is now priced at 4.7 to 5.2 K.

You can buy  Nokia 208DS from Flipkart.com | or Amazon India