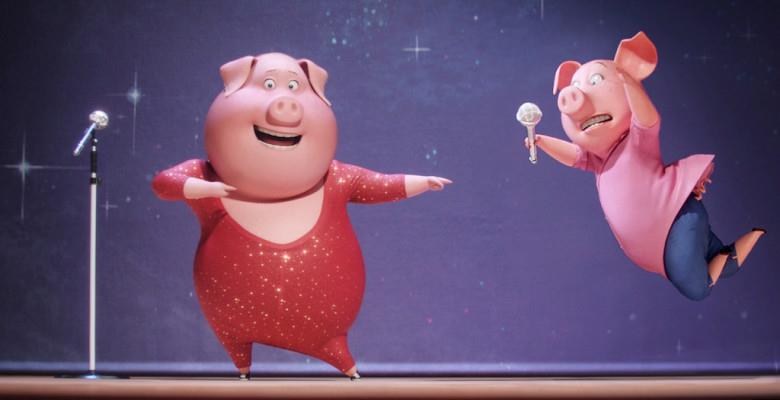 Before we talk about “Sing,” let’s talk about Satan. Remember the scene in “Broadcast News” when Albert Brooks tries to convince Holly Hunter that her handsome new crush is Lucifer? She dismisses him, but Brooks is undeterred. He argues that the most insidious thing about true evil is that it comes to you like a wolf in sheep’s clothing, that the greatest trick the Devil ever pulled was convincing the world he didn’t exist. “He’ll never do an evil thing! He will just bit by little bit lower our standards where they are important. Just coax along flash over substance.”

I’m semi-serious here. Born from the blood money earned by 20th Century Fox atrocitieslike “Alvin and the Chipmunks” and “Horton Hears a Who!,” Illumination Entertainment has been working toward a movie this cynical and creatively bankrupt since “Ice Age” executive producer Chris Meledandri founded the company in 2007. It was always just a matter of time.

READ MORE: How They Animated ‘Sing’ With a Live-Action Vibe Like ‘The Commitments’ — Video

For Pixar, story is everything. For Illumination, story is a lubricant for cross-promotional opportunities. Hyperactivity, constant noise, and calculated cuteness reign supreme. They came out of the gate swinging with “Despicable Me,” but that reasonably clever comedy about an evil genius with a heart of gold would prove to be their crowning achievement.

As a business model, it works. While they fall well short of, say, the average gross of a Pixar film ($634 million), none of them cost more than $76 million; none have grossed less than $348 million. Meanwhile, Studio Ghibli is all but out of business, and the latest film from Laika fell short of $50 million at the domestic box office. It’s like these people are on a profitable suicide mission to lower our standards for animated filmmaking, bit by little bit.

If that is their goal, then “Sing” is the Platonic ideal of an Illumination movie. It’s a profoundly soulless piece of work that shines a light on the mediocrity they foist upon the children of the world.

A jukebox musical for the age of “Carpool Karaoke,” our story begins in a city entirely populated by animals. And that’s where its resemblance to “Zootopia” ends, since that felt like a city designed by animals for animals. This is a perpetually sunny metropolis that looks like it was designed by the same committees that brought us outdoor malls. It’s the home of Buster Moon (Matthew McConaughey), a delusional koala who’s defined by his undying love for this business we call show. Buster was seduced by the stage when he was just a kid (or whatever they call baby koalas), and he refuses to abandon the theatre that he inherited from his father, even if audiences have done so en masse. “Wonder and magic don’t come easy,” he sighs.

But, our furry little hero has a plan! (It’s a terribly hypocritical plan that spits in the face of everything the character claims to admire about the arts, but it’s a plan). He’s going to hold a singing competition, since nothing preserves the wonder and magic of the theater like invitingamateurs to cover an assortment of disposable pop songs, presumably chosen for no other reason than the fact that Universal already owned the rights. (The selection includes an occasional something by Bowie or the Beatles; this movie winks at adults with real music the way that Pixar winks at adults with good writing.) It’s as though writer-director Garth Jennings watched “American Idol” and decided it was ground zero for the golden age of television.

However, Buster doesn’t really love the theater. He loves histheater, much in the same way as Hollywood studios don’t seem to love the movies so much as they do multiplexes.“Nobody wants to see the old shows,” the koala laments, but that doesn’t inspire him to change their minds or broker a compromise between art and commerce. On the contrary, it motivates him to sell out as hard as he can.

When Buster’s secretary (an ancient green iguana voiced by Jennings himself) accidentally drops her glass eye on the boss’ keyboard, the resulting typo sees the prize money spike from $1,000 to $100,000. The next morning, every animal in town is lined up on the sidewalk. It’s greed that first brings everyone together. 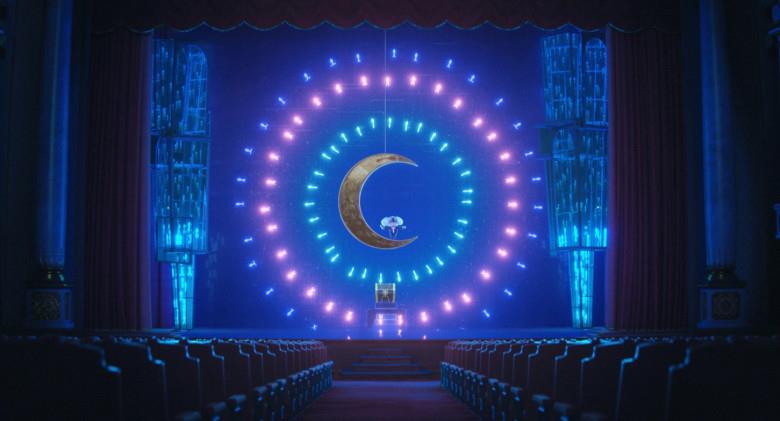 Jennings introduces his zoo-sized cast at such a whirlwind pace that kids won’t have time to blink, let alone lose interest. The symphony of one-note characters includes Rosita (Reese Witherspoon), a porcine housewife who just wants a brief respite from the exhaustion of raising 25 little piglets. There’s Johnny (Taron Egerton), a kid gorilla who would rather steal the spotlight than join his dad’s gang of thieves. There’s Ash (Scarlett Johansson), a punk-rock porcupine whose talent is undercut by her cheating boyfriend and bandmate. Meena (Tori Kelly), is a pathologically shy teenage elephant that can only sing in the shower, while Mike (Seth MacFarlane, further weaponizing his Sinatra shtick) is a gambling mouse who behaves like the adopted member of an actual rat pack. He talks too much, while the scantily clad female mouse for whom he thirsts doesn’t have a single line of dialogue (a sexist oversight that at least spares some poor actress from the indignity of having to voice the character).

The characters’ species seem to have been assigned at random, as the film almost never takes the animals’ unique qualities into account — the biggest animal has the smallest ego, the smallest animal has the biggest ego, and that’s about as deep as it goes. Despite its manic pacing, “Sing” doesn’t have time for nuance or feeling — how could it, when it’s squeezing in more than 65 brainless covers from the last four decades of popular music? (In a nod to its target audience, however, most were culled from the last five years.)

The film compensates by shearing its singers down to the bare minimum. Mike the mouse has an arched eyebrow to communicate his snide and smarmy persona. Johnny wears a jacket to suggest his gangster roots (you can almost hear the studio executives musing if that choice might be too polarizing). Buster looks like a koala. Rosita looks like a pig. In the rare instances where the movie dares to include more than one animal from the same species, the creatures are almost completely indistinguishable. 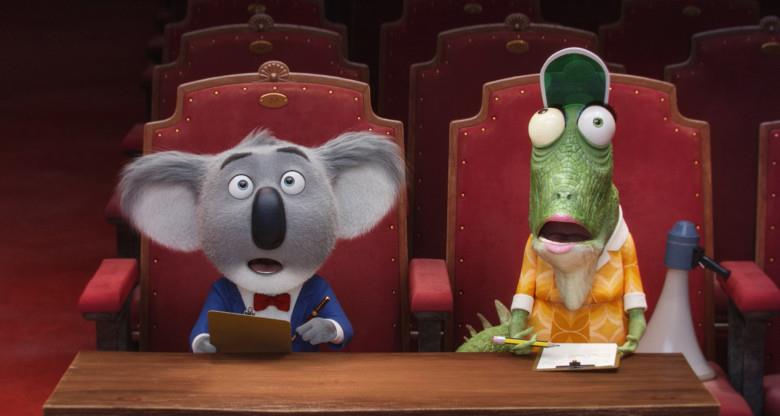 Nobody expected “Sing” to match the pathos or visual wit of “BoJack Horseman,” but it would have been nice for its characters to meet the depth of “Mr. Ed.” This pageant of kooky critters may aspire to be a kid-friendly Christopher Guest movie, but it’s too precise and predetermined to harness that kind of energy, and ends up cleaving more to the overstuffed, underwritten busyness of late-career Garry Marshall (R.I.P.). It’s as though Jennings took the stuff of a great children’s movie and surgically removed everything that made it warm and lovable, leaving behind a sticky residue of processed cuteness and raw marketability. Jennings is a talented director; it’s hard to imagine how the man behind “Son of Rambow” and a handful of the best music videos ever made (e.g. Blur’s “Coffee & TV” and Radiohead’s “Lotus Flower”) could make something so dim.

It’s a shame that “Sing” is such a bonfire of the inanities, because every cast member has a dynamite singing voice. From Johansson’s familiar husk to MacFarlane’s overly familiar croon, these performers often make the film as pleasant to listen to as it is painful to watch. Especially Egerton. He may have been a lot more fun as Eddie the Eagle than as Johnny the Gorilla, but the once and future Kingsman has a serious set of pipes.

It’s sadistic to force him to sing Sam Smith, or to waste Scarlett Johansson on “Call Me Maybe,” but the one original song will have you crying for the covers, and — in a classic case of terrible food and such small portions — it’s still disappointing that the musical performances are cut to ribbons. You hear them in 30-second snippets, like the movie is an iTunes preview for the soundtrack your kids will force you to buy when it’s over. How is it that none of the characters duet? That none of their plot lines meaningfully interact? Maybe that’s what sequels are for.

But if this pandering film is too busy singing to have much to say, there’s a semi-interesting idea or two amidst the noise. Perhaps the most palpable is the notion that some pop music is valuable because it’s generic, not despite it. Anything so universal is imbued with a certain power, but some of these subplots — Meena’s in particular — channel a measure of authentic, Walmart-approved wisdom about how one song can be uniquely internalized by an infinite number of people. “Firework” isn’t just a hit because it’s catchy; it also fits all of our lives as malleably as a magical pair of jeans. That chorus resonates as strongly with an overworked housewife as it does a nervous teenage girl. Not everyone has a great voice, “Sing” argues, but we all need to be heard.

So hear this: “Sing” is a film that’s designed to placate children rather than enrich or inspire them. Illumination’s target audience may be too young to know how awful their latest movie is, but they’ll never watch it when they grow older, they’ll never cherish it as a source of nostalgia. They’ll simply grow up expecting less of the movies, less of the world around them, and less of themselves. No big deal.

And hey, some of these characters are cute! And it’s fun to hear famous people sing. So what if the koala is running a carwash! It’s just a cartoon. Relax. That herky-jerky Laika stuff seems kinda weird, don’t you think? What the hell is a “Kubo,” anyway? “How the Grinch Stole Christmas?” Now those are words I’ve heard, in that order, before! “Despicable Me 3?” Sounds like an afternoon I won’t have to hire a babysitter. “The Secret Life of Pets 2?” What is that dog still not telling us?

“Sing” opens in theaters on December 21.