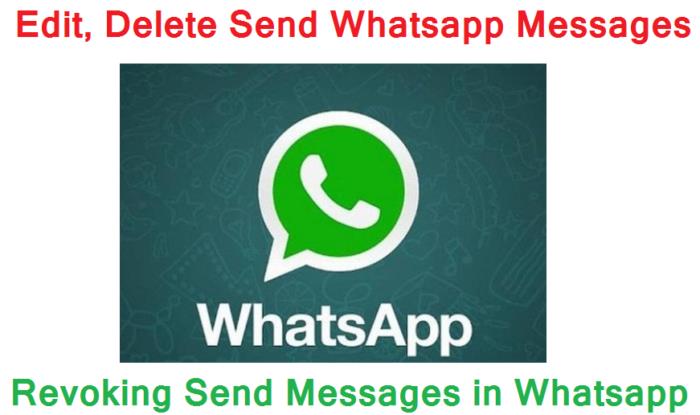 Every Whatsapp user will have a situation in his life where they thought that if he or she got a chance to edit sent messages. Is it a possible thing to recall whatsapp messages and edit or delete it for ever from Whatsapp server. It will be a life changing thing for millions of Whatsapp users if such an update is made. This feature is not digestible for most people and they think that it’s just a dream. It’s because they have come through way of Emails, Mobile messages, Chats .etc. where deleting a sent message is never possible.

If we post a wrong message in Twitter or Facebook we could edit it, because actual message is not downloaded into a mobile phone. It just stays as a website and user will be able to view only messages that it is actually present in website. In case of Facebook messenger this is not possible. If a chat message is sent, then it cannot be edited or deleted. WhatsApp is planning to come up with a life saving update through which it will be possible to edit and delete messages which are send from a mobile to another.

Is it restricted unread messages or even to read messages was main doubt of people who read this news. If editing or deleting of even read messages is possible then it will be a great feature. As per official announcement by WABetaInfo, Revoking messages feature is being implemented in it’s beta testing, Through this feature it will be possible to delete messages that are already read by recipient. We mentioned that Recall Whatsapp messages feature is a life saving one, Why ?. Recently there are many news reports coming about problems happening because of wrong messages sent to contacts in phone mistakenly. What will happen if a girl friend or wife send her photo or personal message to another person by mistake thinking it’s their boy friend or husband. There are many such situations which created problems that could not be revoked. And when Whatsapp groups became popular, lot of people mistakenly send their personal photos, messages or even unwanted videos in their friends, family members or office group.

In many incidents people ended their life thinking of shame it caused, when they wrongly sent videos  to Whatsapp groups. So based on our opinion recall Whatsapp messages update will be one of the most welcomed feature.

Whatsapp is now used by millions of users worldwide and ability to recall sent messages is surely a long awaited feature.

Now on wards you can be relaxed on knowing that you can recall a send Whatsapp message if you have wrongly send it. In many situations people angrily send messages and afterwards think that they should  not have done it. Now you can edit, delete or change a message before it’s read by a recipient. You also have option to change or delete a read message too.

WhatsApp beta is now being tested in iOS platform 2.17.1.869. So will it be restricted only to Apple iPhones or mobiles working in iOs. It’s expected that Whatsapp recalling sent messages feature will be soon available to android, windows, blackberry phones after beta test is done.

With Whatsapp update on revoking whatsapp messages it will be possible for users to edit or delete text, image, audio, video .etc. from recipients phones too. One thing to remember is that you will not be able to edit very old messages using this feature.

On 14 December 2016 (14-12-16) a breaking technology news came out regarding Whatsapp sent messages revoking feature. With this upcoming update to recall Whatsapp messages it is possible to delete any sent message even if it is received by end user in his or her mobile phone.

Now beta test is done in iOs phones and soon it will roll over to android, windows platforms too.

NOTE: Revoking messages feature can delete messages that are already read by the recipient (actually)

How To Delete Send Whatsapp Messages ?

Revoking, Editing, Deleting Whatsapp Messages that are already send, read or unread by a recipient is possible. Steps by step explanation to do it is given by WABeta Info in it’s video.

On editing or deleting a message, recipient will see words “Sender has revoked this message” in place of original message or photo that was sent.

WhatsApp beta for iOS 2.17.1.869 example on how it is possible to delete send messages in Whatsapp platform. This beta test is done in iOs versions.

Now Whatsapp messaging app is used by 160 million users in India alone. Considering its global users multiplying to billions, lot of users will benefit from this feature.

Recently many similar mobile apps have come with features of Whatsappp and lot of users went to use these apps. If Whatsapp update to delete sent whatsapp messages comes up, all users will come back to them. Whatsapp is soon going to be a platform which is irreplaceable by another mobile app in World.

How to Save Messages and Catch People who send Bad messages

But there are few problems that you have to keep in mind when thinking about this feature. In case you have send a bad message or photo to a person there are chances that you will be caught up with evidence. So how can we catch a person who sends bad messages in Whatsapp and deletes it later to destroy evidence.

Take a screenshot of messages you have read. If you received a image you could download it as evidence and take screen shot of it. Now even if that person deletes original message or photo that has been send, you have evidence to catch them red handed. So there are positives and negatives for Whatsapp send messages deleting feature.