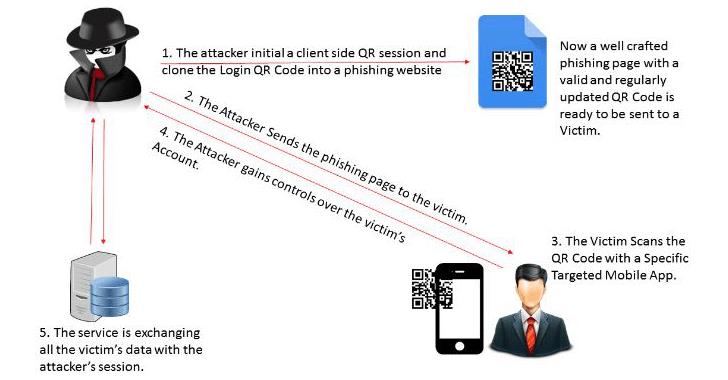 QRLJacking is an attack technique devised by a cyber security researcher to Hijack bypass QR Code Based Quick Login System.

Many desktop applications such as Line, WeChat, and WhatsApp allow users to authenticate themself with the Secure Quick Response Login method that relies on QR-code. The QR-code-based authentication system allows users to quickly access a website without providing a password.

In the Secure Quick Response Login mechanism, the website would display a QR code to the user, the users just have to scan it with a mobile phone app.

Once the QR code is scanned, the site would authorize the user’s access. This method is considered more secure of passwords because it is resilient to attacks such as MiTM and brute-forcing, but unfortunately, hackers have found a way to defeat it with an attack method dubbed QRLJacking (aka Hijacking QR Code Based Login System).

The Egyptian cyber security expert Mohamed Abdelbasset Elnouby demonstrated how to hack accounts from services that implement the Login with QR code authentication. The researcher published a proof-of-concept demonstrating the QRLJacking technique, the attacker just needs to convince the victim into scanning the attacker’s QR code.

Mohamed detailed the QRLJacking attack to the colleagues at THN and also gave them a live demonstration, via Skype.

Below the attack sequence:

Below the video PoC:

“The attackers need to do to initialize a successful QRLJacking attack is to write a script to regularly clone the expirable QR Codes and refresh the ones displayed on the phishing website which they created, because as we know a well implemented QR Login process should have an expiration interval for the QR codes,” the explanation reads.

An attacker can exploit the QRLJacking to take over accounts for services that rely on the vulnerable QR-Code-based Login authentication.

For further information give a look to the QRLjacking page published by the expert on Github.