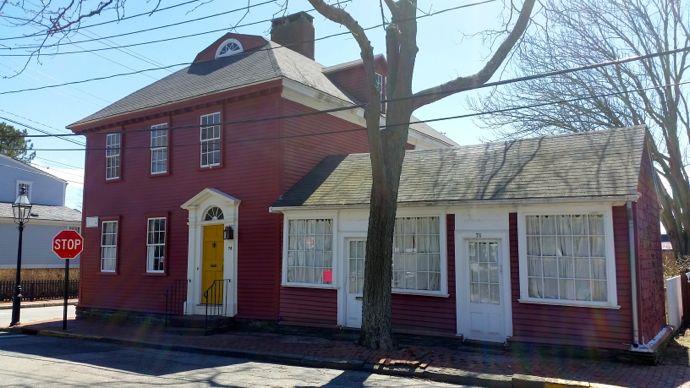 In 2014, when the Newport Restoration Foundation bought the Christopher Townsend House, the hot water heater and boiler had already been moved from the basement to the first floor. Unfortunately, that hadn’t been high enough to keep them dry during Hurricane Sandy, when the house was flooded up to the first-floor framing.

So how should our architectural authenticity be preserved? Homeowners on the Point – and anyone else interested in saving Newport’s architectural heritage (not to mention other valuable properties) – must ask themselves the same thing, or risk losing structures altogether. 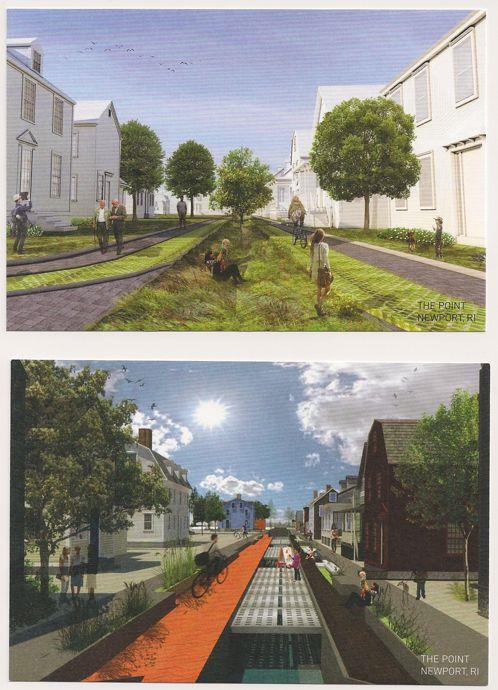 Imagining Newport’s future in the face of sea level rise

The RISD students virtually walked visitors through their conceptual redesigns, which ranged from clever to wild: swapping streets for canals; creating a multi-level, skyscraper-high neighborhood; replacing existing foundations with floating ones; and more. Though some left today’s residences in tact, few foresaw neighborhoods that physically resemble what we know today.

Though a variety of mitigation options exist, there are very few models for preserving historic structures in the face of sea level rise. On the plus side, Newport’s Colonial houses – with their plank construction, stone foundations, and lime-based plaster finishes – are extraordinarily resilient. But the “modern” additions of electricity, plumbing, and heating systems – well, not so much.

How do we authentically preserve our history?

Of course, many historical houses in Newport have already been moved, raised, added to, or otherwise changed over the centuries. Several of the 80-plus houses that NRF owns in Newport, for example, might have been destroyed had they not been moved. So when it comes to preserving historic character, we have to ask ourselves just what it is that we’re trying to preserve. One house? An entire neighborhood? An understanding of history? The feeling of a place?

How best to save the Point is still unclear. But cohesive change will require clear guidelines that include input from all stakeholders – the city, property owners, and everyone else who cares. A framework for making changes will ensure that our neighborhoods retain their authentic qualities, even as buildings are transformed.