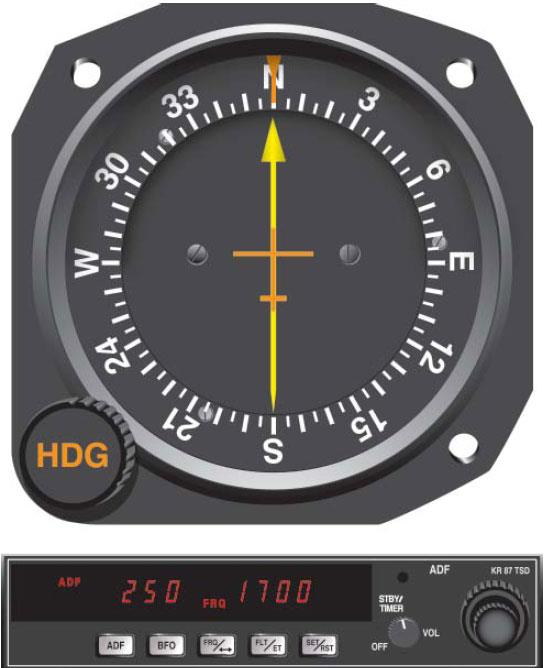 The ground equipment, the NDB, transmits in the frequency range of 190 to 535 kHz. Most ADFs will also tune the AM broadcast band frequencies above the NDB band (550 to 1650 kHz). However, these frequencies are not approved for navigation because stations do not continuously identify themselves, and they are much more susceptible to sky wave propagation especially from dusk to dawn. NDB stations are capable of voice transmission and are often used for transmitting the automated weather observing system (AWOS). The aircraft must be in operational range of the NDB. Coverage depends on the strength of the transmitting station. Before relying on ADF indications, identify the station by listening to the Morse code identifier. NDB stations are usually two letters or an alpha-numeric combination.

The airborne equipment includes two antennas, a receiver, and the indicator instrument. The “sense” antenna (nondirectional) receives signals with nearly equal efficiency from all directions. The “loop” antenna receives signals better from two directions (bidirectional). When the loop and sense antenna inputs are processed together in the ADF radio, the result is the ability to receive a radio signal well in all directions but one, thus resolving all directional ambiguity. The indicator instrument can be one of four kinds: fixedcard ADF, rotatable compass-card ADF, or radio magnetic indicator (RMI) with either one needle or dual needle. Fixed-card ADF (also known as the relative bearing indicator (RBI)) always indicates zero at the top of the instrument, with the needle indicating the RB to the station. Figure 7-3 indicates an RB of 135°; if the MH is 045°, the MB to the station is 180°. (MH + RB = MB to the station.) 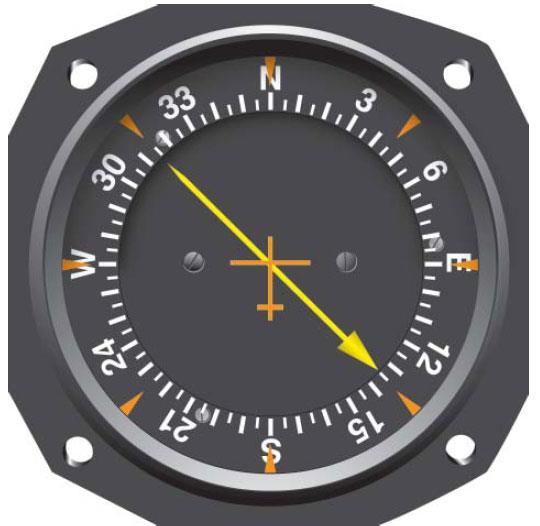 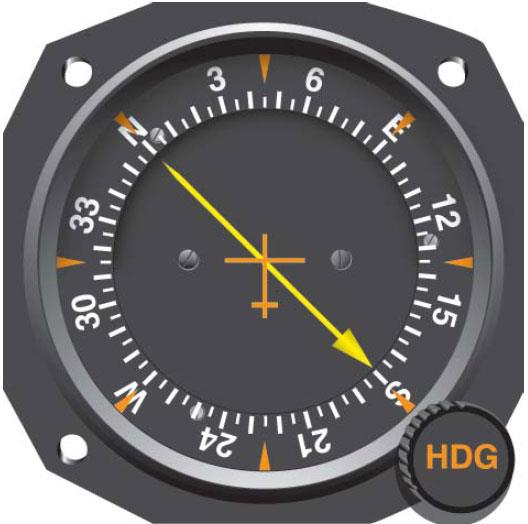 The RMI differs from the movable-card ADF in that it automatically rotates the azimuth card (remotely controlled by a gyrocompass) to represent aircraft heading. The RMI has two needles, which can be used to indicate navigation information from either the ADF or the VOR receiver. When a needle is being driven by the ADF, the head of the needle indicates the MB TO the station tuned on the ADF receiver. The tail of the needle is the bearing FROM the station. When a needle of the RMI is driven by a VOR receiver, the needle indicates where the aircraft is radially with respect to the VOR station. The needle points to the bearing TO the station, as read on the azimuth card. The tail of the needle points to the radial of the VOR the aircraft is currently on or crossing. Figure 7-5 indicates a heading of 005°, the MB to the station is 015°, and the MB from the station is 195°. 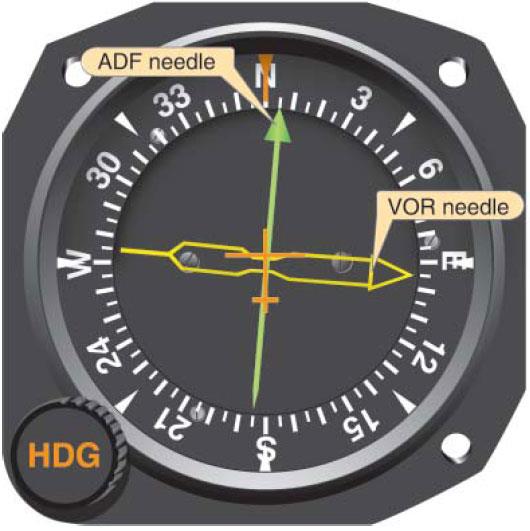 The ADF can be used to plot your position, track inbound and outbound, and intercept a bearing. These procedures are used to execute holding patterns and nonprecision instrument approaches.

When you are near the station, slight deviations from the desired track result in large deflections of the needle. Therefore, it is important to establish the correct drift correction angle as soon as possible. Make small heading corrections (not over 5°) as soon as the needle shows a deviation from course, until it begins to rotate steadily toward a wingtip position or shows erratic left/right oscillations. You are abeam a station when the needle points 90° off your track. Hold your last corrected heading constant and time station passage when the needle shows either wingtip position or settles at or near the 180° position. The time interval from the first indications of station proximity to positive station passage varies with altitude—a few seconds at low levels to 3 minutes at high altitude.

The ADF may be used to “home” in on a station. Homing is flying the aircraft on any heading required to keep the needle pointing directly to the 0° RB position. To home in on a station, tune the station, identify the Morse code signal, and then turn the aircraft to bring the ADF azimuth needle to the 0° RB position. Turns should be made using the heading indicator. When the turn is complete, check the ADF needle and make small corrections as necessary.

Figure 7-6 illustrates homing starting from an initial MH of 050° and an RB of 300°, indicating a 60° left turn is needed to produce an RB of zero. Turn left, rolling out at 50° minus 60° equals 350°. Small heading corrections are then made to zero the ADF needle. 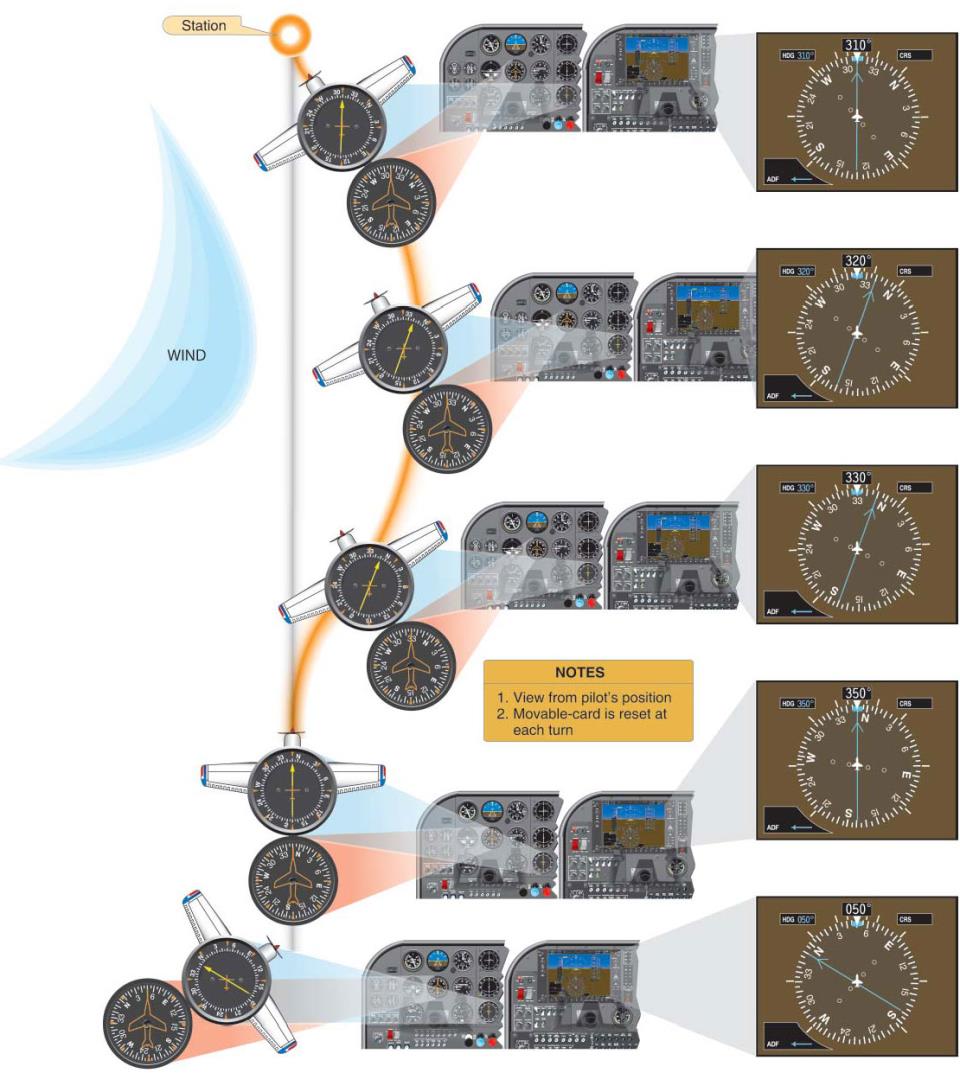