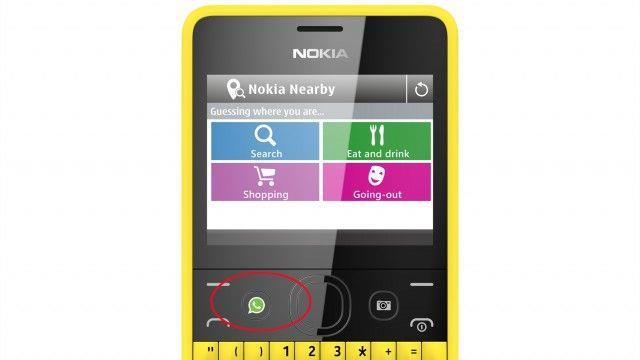 Nokia has added a WhatsApp button for instant messaging to its new Asha 210 smartphone — the first phone to do so.

The mobile manufacturer announced this week that the low-budget Asha 210 ($72), which supports Wi-Fi and 2G connections, will highlight the messaging service WhatsApp via ample real estate on the hardware itself. (Note: WhatsApp is available for various platforms, including iOS, Android, Windows Phone, BlackBerry 7 and more).

WhatsApp allows you to send a private message to your phone contacts for free, similar to BlackBerry Messenger, to eliminate texting fees. The company told Mashable earlier this month that it has more than 200 million monthly users — compared to BBM’s 60 million users — and more than 8 billion inbound messages a day (12 billion outbound).

It was recently rumored that Google was in talks to buy the popular messaging app for an offer close to $1 billion. Last year, there was buzz that Facebook was interested in acquiring the company.

To send messages via the WhatsApp function on the Nokia phone, users will hold down the button the physical QWERTY keyboard. As a part of the partnership, the service will be free of charge — in the past, WhatsApp has cost $0.99 for each year after the first.

This isn’t the first time Nokia has added a social button to its hardware — it has also touted a dedicated Facebook key. The Asha 210, which comes in various colors including yellow, cyan and magenta, runs on the company’s Series 40 mobile operating system. It aims to target consumers looking to spend less on mobile.

“The Nokia Asha 210 really stands out giving super-social consumers new ways to express their personalities through design, color and innovations like the world’s first WhatsApp button,” said Timo Toikkanen, executive vice president of mobile phones at Nokia, in a statement. “It has been designed to allow people to easily update their social networks, stay in touch with friends and share user created content.”

The Asha 210 will be available by the end of the second quarter.