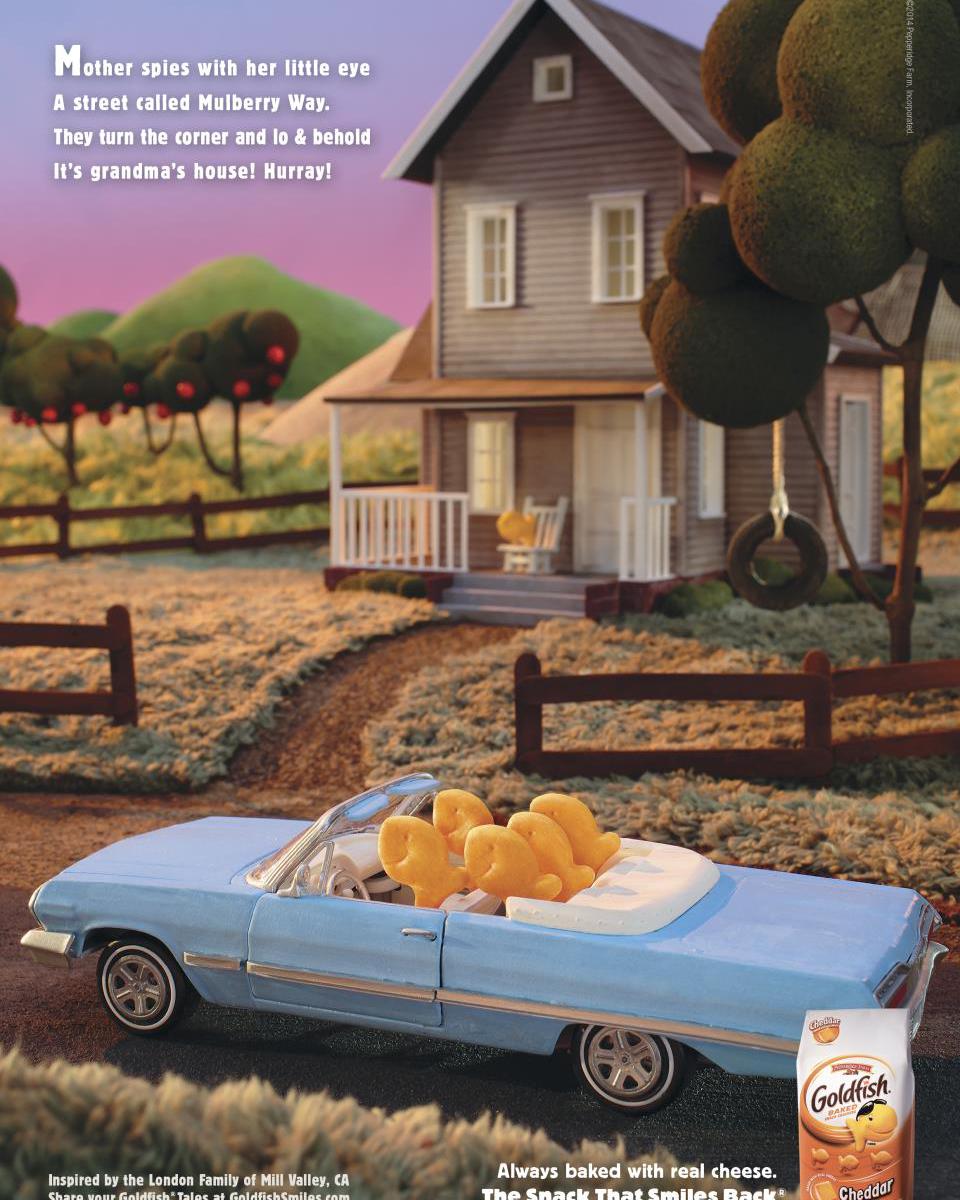 By 2014, the US snack world had become a $124 billion business, with an average 4,518+ snack items cluttering shelves (IRI, 2014). Goldfish® crackers competed against more wholesome snacks like yogurt and granola bars (IRI, 2014), as well as ‘snack giants’ like Doritos, Tostitos, and Cheez-It with budgets up to twice that of Goldfish (Kantar Media, 2014). While the overall snack world grew, the ‘cracker subset’ of Goldfish declined in 2H 2014 as new moms looked elsewhere (IRI, 2014).

These industry and brand considerations contributed to our objectives, as follows:

2. Drive engagement and experience with the Goldfish brand – Her level of campaign-driven interaction with the brand in the digital space.

Why does this entry deserve to win?

Research uncovered three powerful insights, which we leveraged to focus our strategy:

Goldfish® Product Truth: The unique physical attributes of Goldfish let Mom immerse in the innocence of childhood, enjoy moments of connection with her child, to indulge in whimsy and play. (Psychologics, 2003)

To drive emotional engagement, we created a visually striking miniature environment that puts Goldfish into mom’s world, and mom into theirs. We elicited a fun, immersive DIY feel by partnering with one of the best stop-motion animation companies, Stoopid Buddy Stoodios (creators of Robot Chicken). They helped create a miniature world where shag carpeting is grassy fields and cotton balls are clouds.

To connect deeply, we actively engaged moms in storytelling. As observed through social listening, moms and kids are already telling Goldfish Tales! To encourage this behavior, we invited moms to share tales, as inspiration for us and vice versa. Our promotion asked her to submit images, dioramas, poems and prose to GoldfishSmiles.com hub. Selected moms could win trips to U.S. locations of choice to create more little moments / big smiles with Goldfish. The promotion’s unprecedented success led to a second round, evolving to accept submissions via social entry [Twitter and Instagram hashtag], with monthly themes to renew inspiration.

Overall, the campaign achieved penetration goals, increased share among Millennial families, and increased base sales by 2.3% in a declining cracker subset. In just six months, the campaign drove:

– Campaign expansion – Our first Tale’s [“In The Car”] success led to another [“Snow Day”], with a third in development! Our target’s engagement with first promotion drove evolution into second via social entry [currently live, November 2015 – July 2016]. 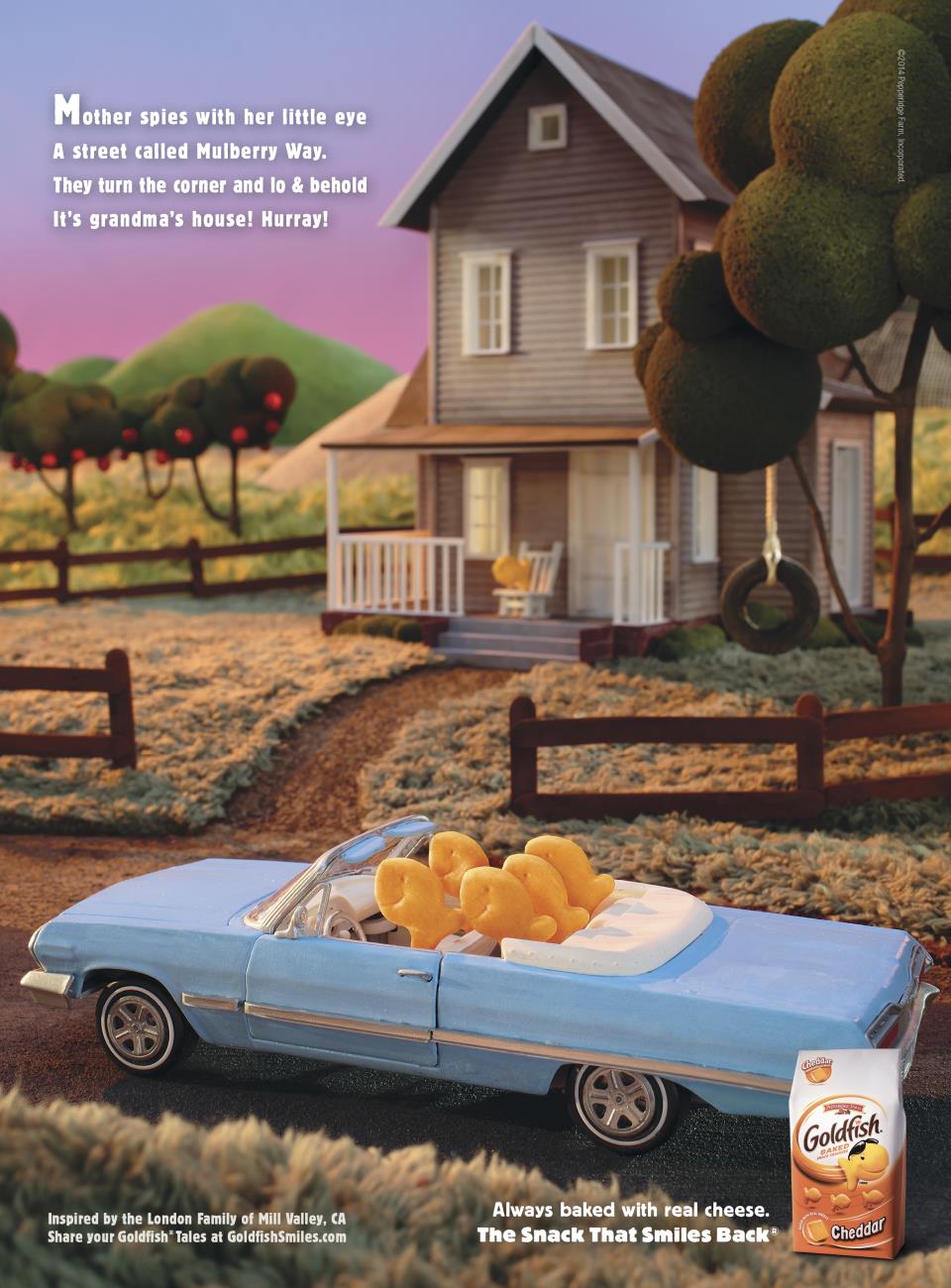 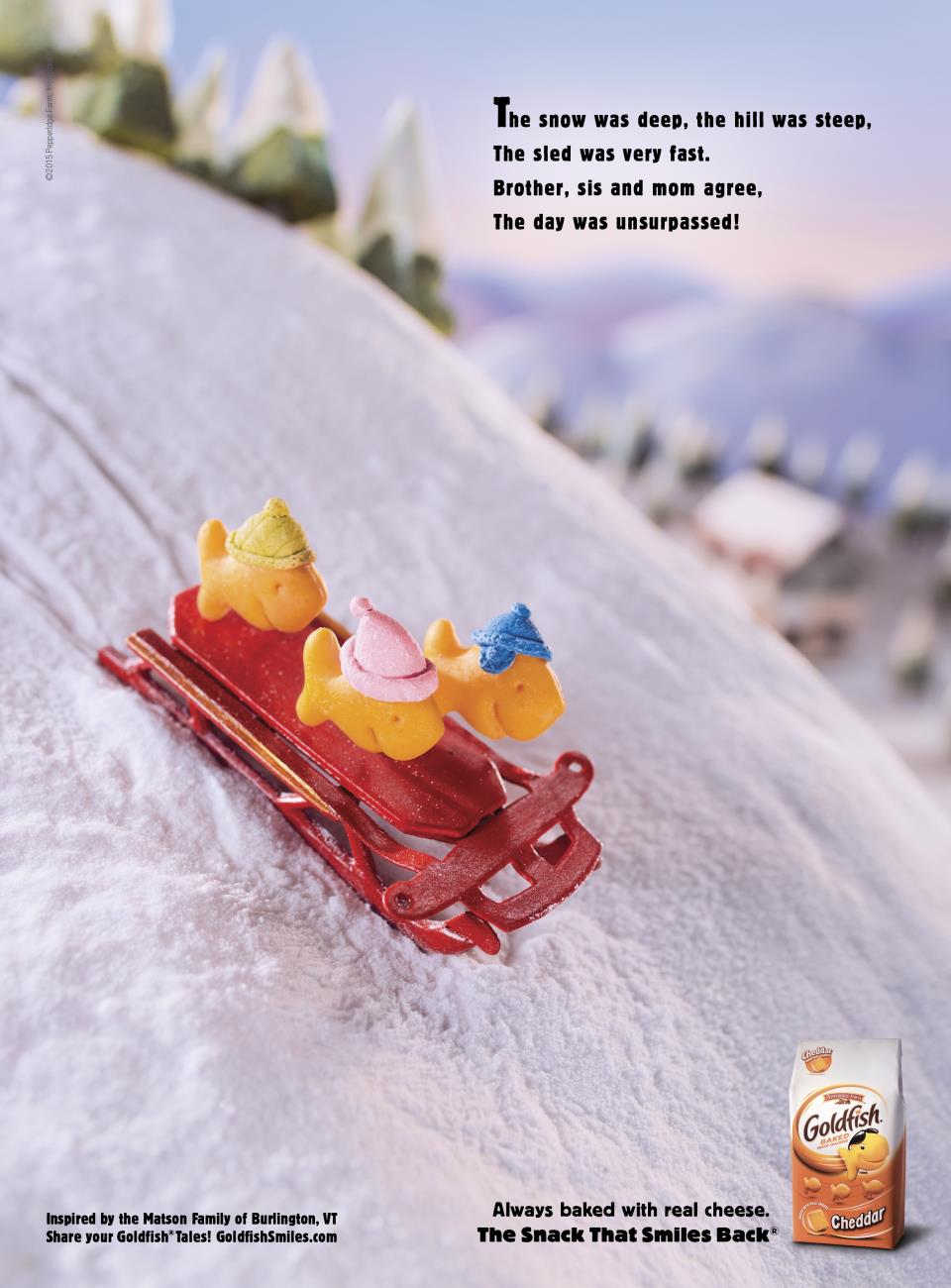 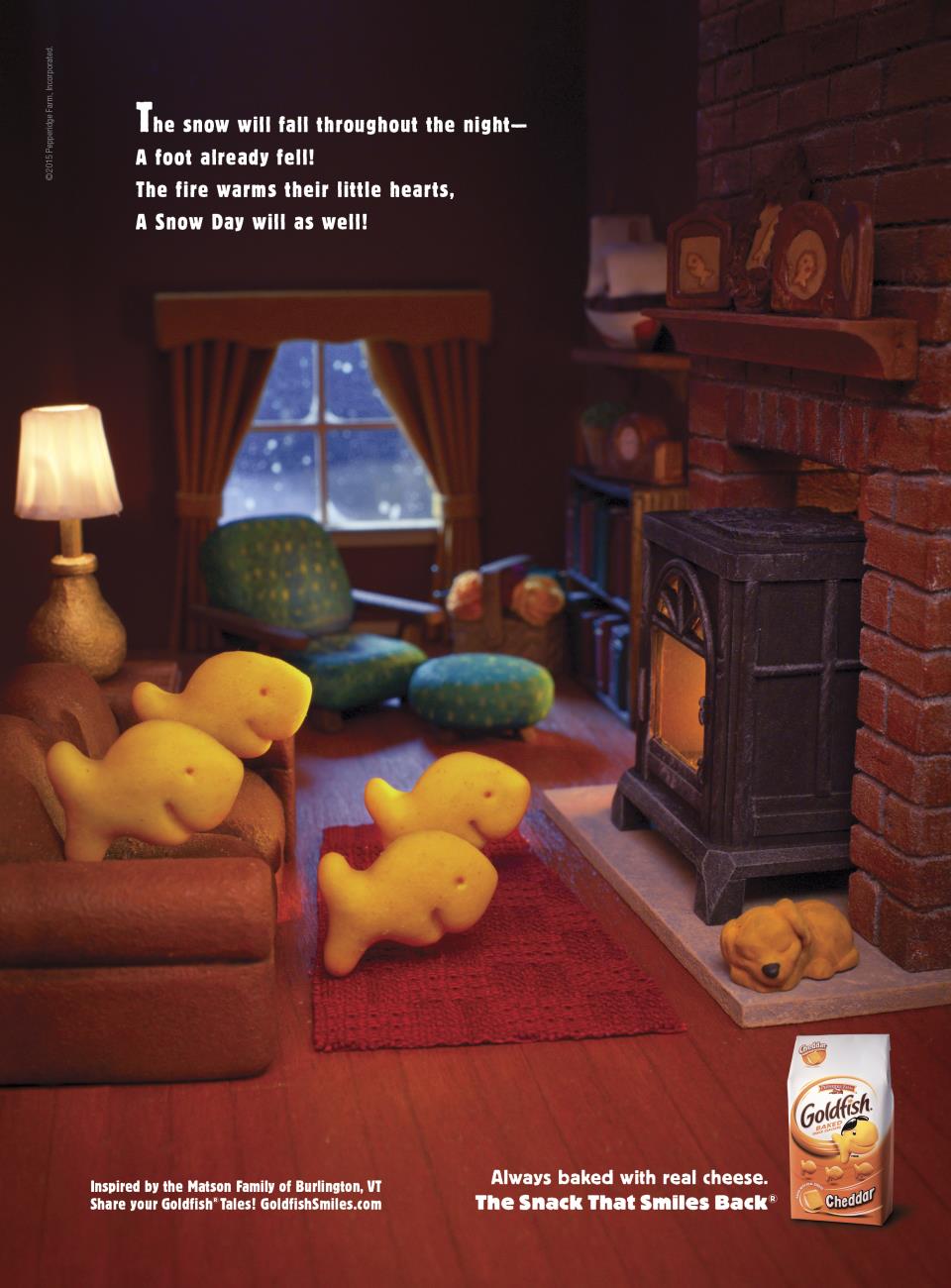 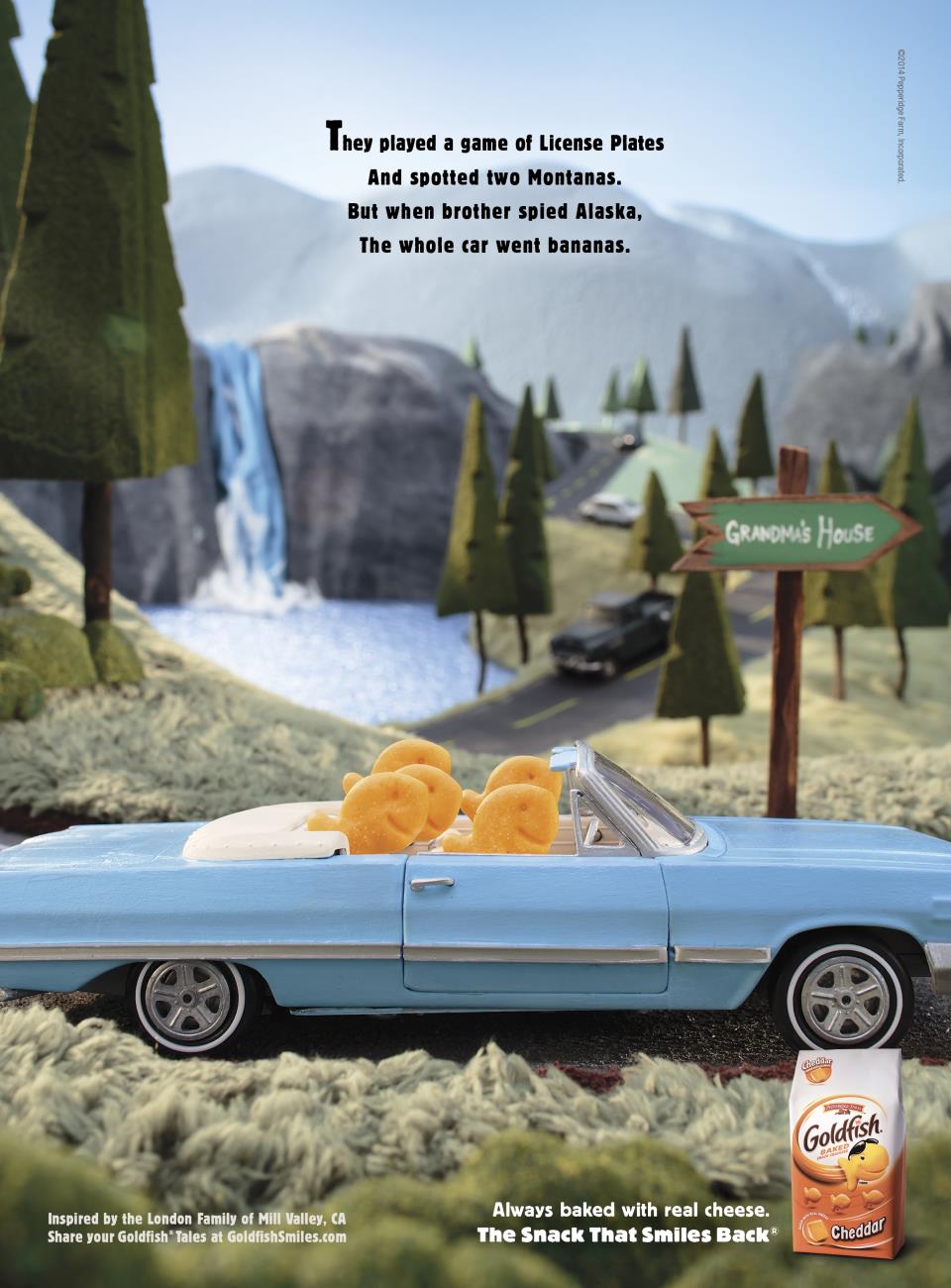