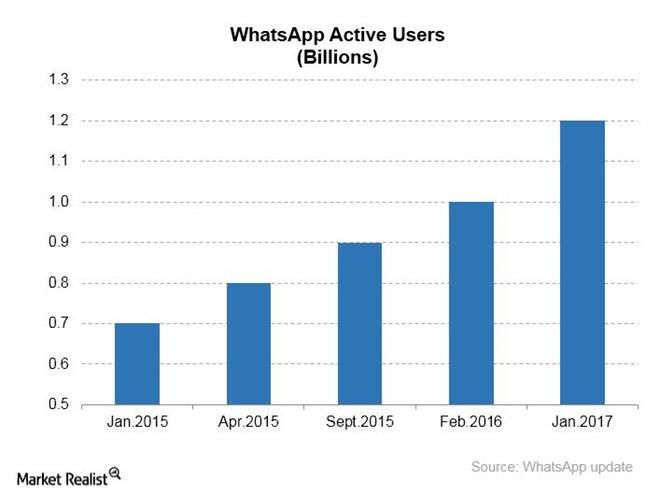 Facebook (FB) has been vague about its WhatsApp monetization plans. It has hinted several times that it would like to avoid selling ads on the app (application). But recent developments at WhatsApp suggest that the app could be laying the ground for advertising.

WhatsApp recently introduced a disappearing status update feature that seems to be borrowed from Snap’s (SNAP) Snapchat. It enables WhatsApp subscribers to post videos and photos that disappear after 24 hours. The update seems to be a feature designed to improve WhatsApp’s user engagement since it would encourage subscribers to stay on the app longer or open it more frequently to catch up with what their friends are saying before the posts disappear.

Success! You are now receiving e-mail alerts for new research. A temporary password for your new Market Realist account has been sent to your e-mail address.

Success! has been added to your Ticker Alerts.

Success! has been added to your Ticker Alerts. Subscriptions can be managed in your user profile.

The push for user engagement reeks of advertising

Efforts to enhance user engagement on a service or app have largely been seen as appealing to advertisers. But that would be baffling in Facebook’s case since the company has avoided talking about WhatsApp and advertising in the same breath. WhatsApp boasts ~1.2 billion active users, and that number has risen steadily over the years, as you can see in the above graph.

Another recent interesting development at WhatsApp is the hiring of a Facebook executive for marketing and advertising. Matthew Idema will become the COO (chief operating officer), according to a report in The Drum. The move seems to show that WhatsApp is beginning to take its monetization more seriously. Idema’s profile raises questions about the monetization approach the app is pursuing if advertising isn’t the priority.

Facebook already includes ads on its other digital properties, including Instagram and Messenger. That’s increasing the competition for marketers’ dollars with Snap, Twitter (TWTR), Alphabet’s (GOOGL) Google, and the review site Yelp (YELP).