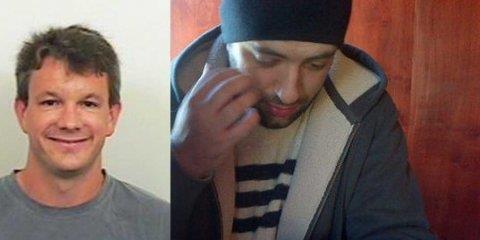 Former Yahoo engineers Brian Acton and Jan Koum just made the deal of a lifetime with agreement today to be acquired by Facebook for $16 billion.

Messaging apps are becoming one of the most competitive sectors of tech.

Apps like WeChat are used by hundreds of millions of people to send a variety of messages to people all over the world for free.

WhatsApp has led the charge with the most users but now Facebook just gained a considerable advantage.

Prior to this deal, Acton and Koum made millions of dollars without the need of advertising.

Acton and Koum make money from WhatsApp in two ways. They charge iPhone users a one-time $.99 fee upon installation. They charge Android users $.99 every year (after the first year).Lots of people have paid Acton and Koum $.99.The Wall Street Journal reports that 250 million people use WhatsApp every month.

It doesn’t take a very complicated estimation to figure out that 250 million people paying $.99 once or annually adds up to a lot of money – millions and millions of dollars.

Acton and Koum haven’t said so (they are very press shy), but you have to assume huge percentage of that money is going straight into their pockets. The company has taken little to zero outside investment. A year ago this time, Acton and Koum told a reporter they only employ 30 people. Their company does all its development in Russia, where there is cheap talent.

The millions Acton and Koum are making is obviously nice.

But they could make much more  if they chose to.

They are two ways they could do this:

According to several reports, Acton and Koum could make a ton of money right away by selling their app to Google or Facebook.

A couple of days ago, Koum posted a note to the WhatsApp company blog explaining “ why we don’t sell ads .”

It began with a quote from the character Tyler Durden in the book “Fight Club.”

“Advertising has us chasing cars and clothes, working jobs we hate so we can buy shit we don’t need.”

Brian and I spent a combined 20 years at Yahoo!, working hard to keep the site working. And yes, working hard to sell ads, because that’s what Yahoo! did. It gathered data and it served pages and it sold ads.

We watched Yahoo! get eclipsed in size and reach by Google… a more efficient and more profitable ad seller. They knew what you were searching for, so they could gather your data more efficiently and sell better ads.

These days companies know literally everything about you, your friends, your interests, and they use it all to sell ads.

When we sat down to start our own thing together three years ago we wanted to make something that wasn’t just another ad clearinghouse. We wanted to spend our time building a service people wanted to use because it worked and saved them money and made their lives better in a small way. We knew that we could charge people directly if we could do all those things. We knew we could do what most people aim to do every day: avoid ads.

No one wakes up excited to see more advertising, no one goes to sleep thinking about the ads they’ll see tomorrow. We know people go to sleep excited about who they chatted with that day (and disappointed about who they didn’t). We want WhatsApp to be the product that keeps you awake… and that you reach for in the morning. No one jumps up from a nap and runs to see an advertisement.

Advertising isn’t just the disruption of aesthetics, the insults to your intelligence and the interruption of your train of thought. At every company that sells ads, a significant portion of their engineering team spends their day tuning data mining, writing better code to collect all your personal data, upgrading the servers that hold all the data and making sure it’s all being logged and collated and sliced and packaged and shipped out… And at the end of the day the result of it all is a slightly different advertising banner in your browser or on your mobile screen.

Remember, when advertising is involved you the user are the product.

At WhatsApp, our engineers spend all their time fixing bugs, adding new features and ironing out all the little intricacies in our task of bringing rich, affordable, reliable messaging to every phone in the world. That’s our product and that’s our passion. Your data isn’t even in the picture. We are simply not interested in any of it.

When people ask us why we charge for WhatsApp, we say “Have you considered the alternative?”

In Silicon Valley, industry sources are at once amazed by WhatsApp’s success and skeptical that Acton and Koum can sustain it. 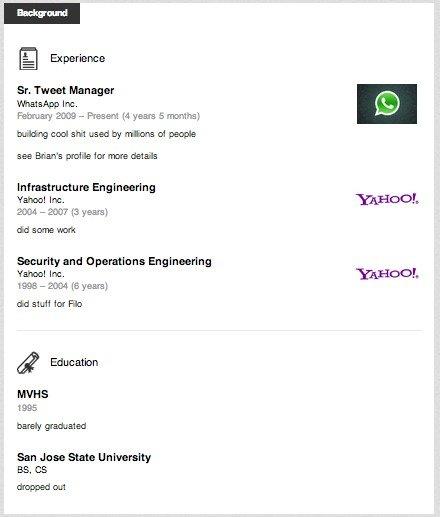 One industry source told us WhatsApp’s  strong and distinct company culture is modeled after Craigslist.

This was not a compliment.

Despite being world famous, Craigslist is still operated as a small, profitable company by its founder, Craig Newmark.

It has made Newmark very wealthy individually, but many believe it could have been a company the size of eBay by now, if it had taken outside money and had been run by someone with greater ambitions.

This source said WhatsApp’s company culture makes itless likely Acton and Koum will be able to build what many in the Valley would consider to be a real business and company.

But the thing is … from where we sit, it doesn’t look like Acton and Koum much care if the rest of Silicon Valley views WhatsApp as “a real business and company.”

They are already making millions off an app which is used by hundreds of millions of people.

Also, both were relatively early employees at Yahoo, and it’s likely that made them financially secure.

The best evidence that the WhatsApp founders don’t care about how the rest of the Valley views them is Jan Koum’s Twitter account.

His avatar for it is not your typical founder’s studio head shot. His bio doesn’t brag about his title. It’s a quote. He is followed by just 4,000 people – a lot for most people, but not very much for a Silicon Valley star. He only follows one account. It’s @jesus94306, the account for Jesus Christ Silicon Valley, a witheringly satirical blog about the tech business. One of his most recent tweets is a quote from a Kanye West lyric.

“You think you free but you a slave to the funds, baby.”