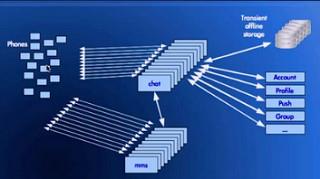 When we last visited WhatsApp they’d just been acquired by Facebook for $19 billion. We learned about their early architecture, which centered around a maniacal focus on optimizing Erlang into handling 2 million connections a server, working on All The Phones, and making users happy through simplicity.

Two years later traffic has grown 10x. How did WhatsApp make that jump to the next level of scalability?

Rick Reed tells us in a talk he gave at the Erlang Factory: That’s ‘Billion’ with a ‘B’: Scaling to the next level at WhatsApp (slides), which revealed some eye popping WhatsApp stats:

What has hundreds of nodes, thousands of cores, hundreds of terabytes of RAM, and hopes to serve the billions of smartphones that will soon be a reality around the globe? The Erlang/FreeBSD-based server infrastructure at WhatsApp. We’ve faced many challenges in meeting the ever-growing demand for our messaging services, but as we continue to push the envelope on size (>8000 cores) and speed (>70M Erlang messages per second) of our serving system.

What are some of the most notable changes from two years ago?