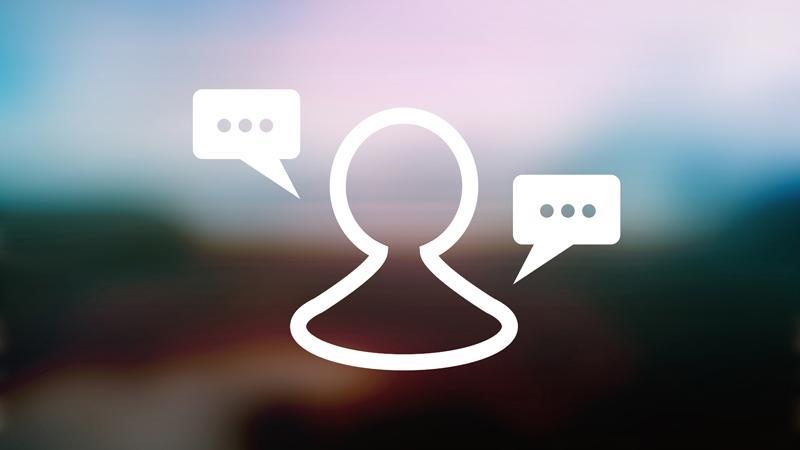 WhatsApp is now available on the web via the Chrome browser, and in a tablet app, meaning it’s possible to simultaneously access your WhatsApp account on your phone,tablet, laptop and PC without a hack. Here’s how to get WhatsApp on your phone, tablet, laptop AND your PC, all at once.

WhatsApp Web: Before you begin

Note that for now WhatsApp on the web works only with Android, BlackBerry, Nokia and Windows phones, and as of August 2015, iOS users. You must also be using the Google Chrome web browser, and make sure you are running the latest version of WhatsApp (in Android, launch the Google Play Store, tap the three lines icon at the top left, choose My apps and check whether an update is available for WhatsApp).

According to 17-year-old security researcher Indrajeet Bhuyan, a bug within WhatsApp on the Web allows complete strangers to view your profile picture even if you have chosen to keep it hidden. He also notes that images are not blurred out in the conversation thread once they have been deleted by the user, suggesting the WhatsApp mobile and desktop platforms are not yet synched correctly.

Though WhatsApp originally claimed that WhatsApp Web wouldn’t be available for iPhone or iPad users due to restrictions in its iOS system, the company has quietly added support for the service. If you head over to the official WhatsApp Web page, you’ll notice that “iPhone” has been added, though the company has yet to officially announce support.

The update seems to be rolling out gradually, and iOS users can see whether its been activated for their accounts yet by accessing the Settings menu. Once accessed, you should see a “WhatsApp Web” menu – if not, sit tight and check again in a few hours. 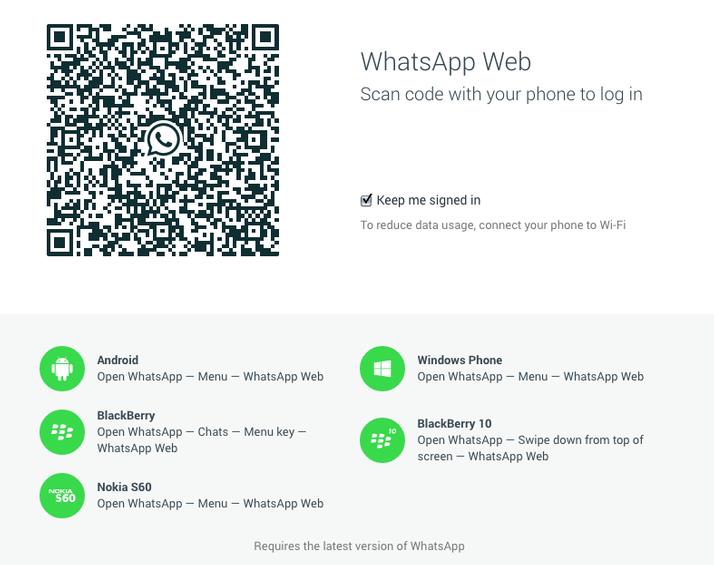 Using WhatsApp in your web browser couldn’t be easier. On your computer or tablet launch the Chrome browser (other browsers are not supported) and head tohttps://web.whatsapp.com. We tried this in OS X; it should work on any platform other than iOS using the Chrome browser and ensuring you are viewing the desktop site if you’re doing so on a tablet. A QR code will pop up onscreen on your PC. You do not need a QR reader installed on your phone to read this. Note that if you’re using a tablet you will need to request the desktop site in Chrome’s settings (and no, this won’t work in Chrome on an iPad, even if you have an Android phone). 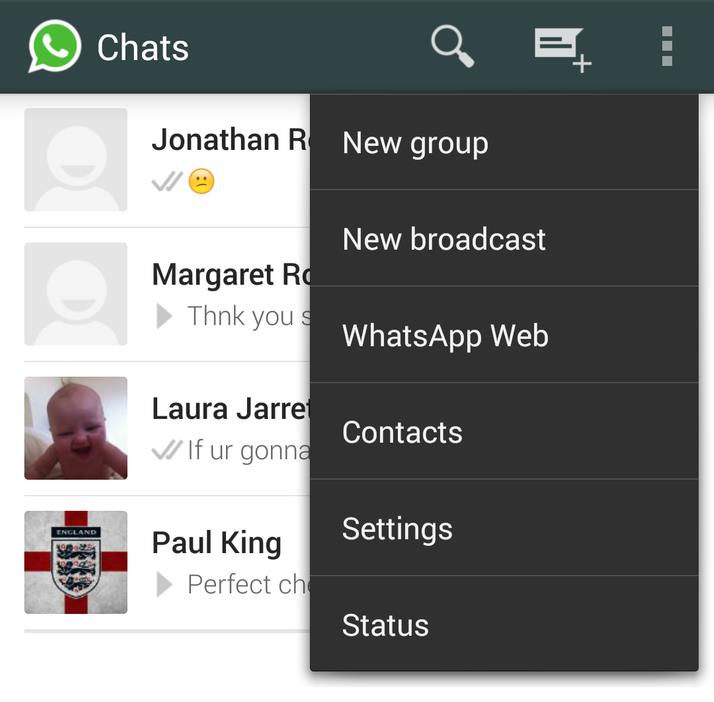 Launch WhatsApp on your phone and access the settings menu (click the three dots at the top right to access more options on an Android device), then choose WhatsApp Web. 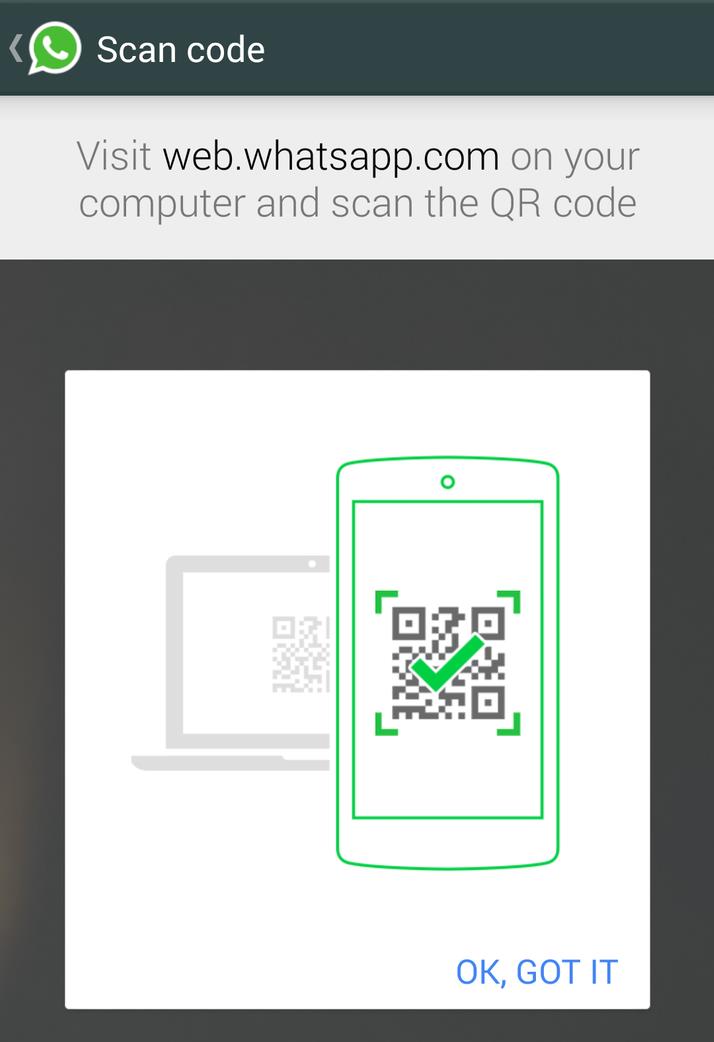 A QR reader will then open on your phone; point this at your PC screen to read the code and be automatically logged into WhatsApp on the web. 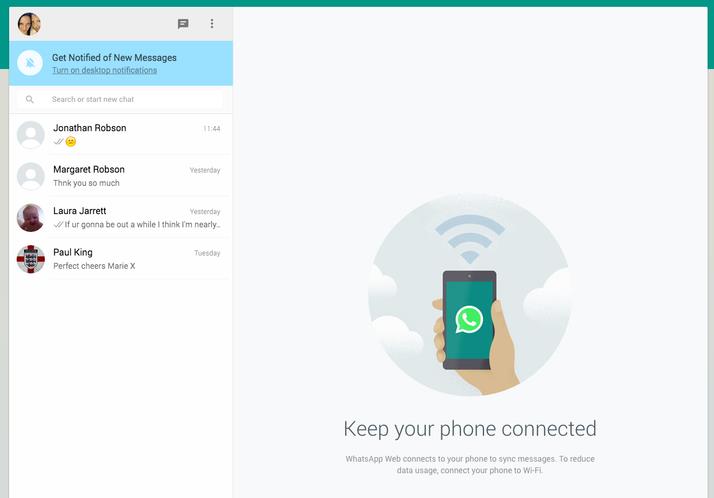 The interface will be familiar to WhatsApp phone users, but you should note that desktop notifications are supported, which you may want to switch off in the settings menu for privacy reasons if this is a shared PC. As on the phone, tapping the three-dot icon brings up more options. Select Notifications and then deselect Desktop Alerts and Sounds.

Starting a new conversation is slightly different on the desktop. As on the phone you can click the new message icon to select one of your contacts, but in WhatsApp on the web the search function lets you start new conversations as well as filter existing chats. 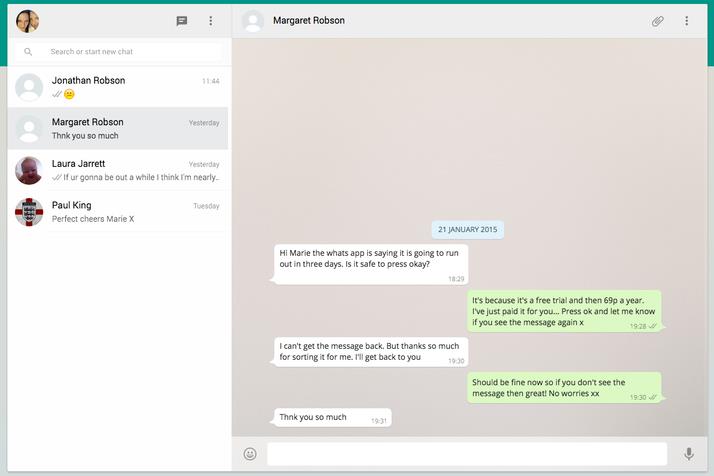 Within a conversation the interface matches that of the phone, with emoticon and mic icons sitting either side of the bottom text-entry field, and a paperclip icon at the top to attach files. Beside this is a more options icon that lets you view contact info. And as on the phone you get the single-, twin- and blue-tick system to show whether messages have been sent, delivered and read. Also see: What do the two blue ticks mean in WhatsApp? 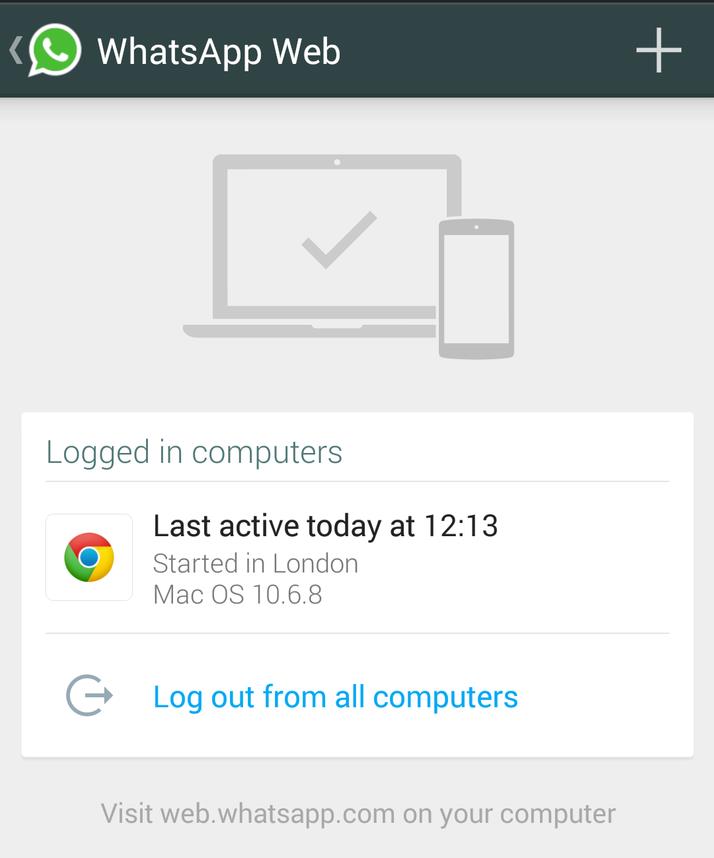 Once your phone and computer are connected you are able to manage your logged in computers from your phone via the Options, WhatsApp on the web menu. From here you can log out from all computers, or you can use the options menu in WhatsApp on the web to log out from the PC you’re currently using. WhatsApp will by default keep you logged in unless you specify otherwise, but having logged out you’ll need to go through the QR code process again the next time you want to log into WhatsApp on that machine.

Messages between phone and browser are instantly synched, so users on limited mobile data contracts should be wary of increased data usage. It’s a good idea to switch on your Wi-Fi if you’re a heavy WhatsApp user.

How to install WhatsApp tablet app

Before we guide you through the process of installing the WhatsApp tablet app we should point out that this is not an official WhatsApp software. Tablet Messenger for WhatsApp, which we explain how to install and use below, is a third-party app that replicates the functionality of WhatsApp on the Web (as described above), allowing you to have a WhatsApp app on your tablet as you do on your phone, rather than needing to log in via Chrome.

Launch Google Play on your Android tablet and search for Tablet Messenger for WhatsApp. Tap on what is likely to be the first result in the list, from developer GJC. On the app page tap Install, then tap on Accept to allow Tablet Messengerfor WhatsApp to access your location and Photos/Media/Files. The app will download and install to your tablet; when it’s done tap on Open.

On first launching Tablet Messenger for WhatsApp you’ll be greeted with a large QR code, and the option to keep you signed in will be enabled by default. Unless you have multiple users sharing your tablet, it’s easiest to leave this option checked. You’ll also see the message ‘Use WhatsApp on your phone to scan the code’. So do that: launch WhatsApp on your phone, tap the three vertical dots at the top right corner and select WhatsApp Web. Your phone should launch a QR code reader, which uses the device’s camera, which you should then hold over the tablet so it can read the code on its screen. You don’t need to do anything else – WhatsApp will automatically pair the two. 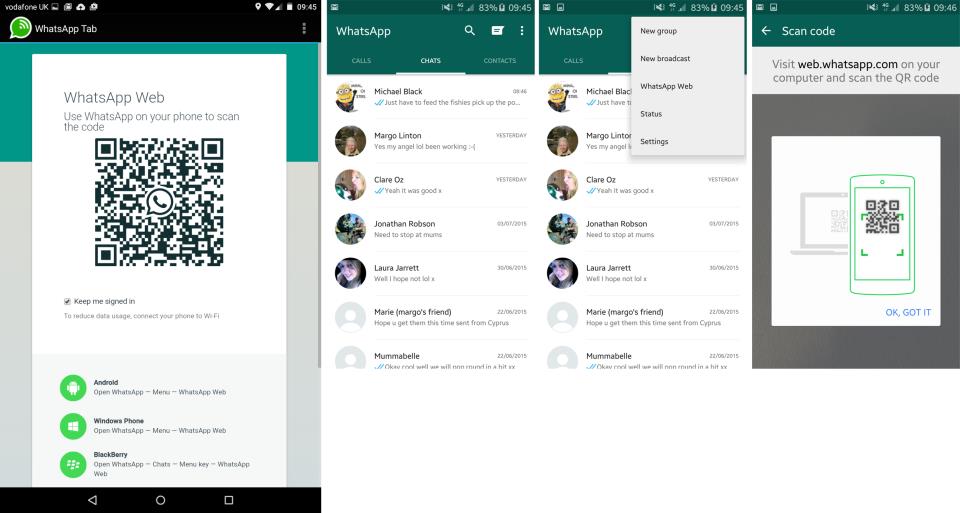 Once you have Tablet Messenger for WhatsApp successfully installed on your tablet and paired to your phone, you’ll be able to use it in exactly the same way as would WhatsApp Web. This means all your messages and media will be mirrored from phone to tablet, and any messages you send on either platform will be visible on the other. 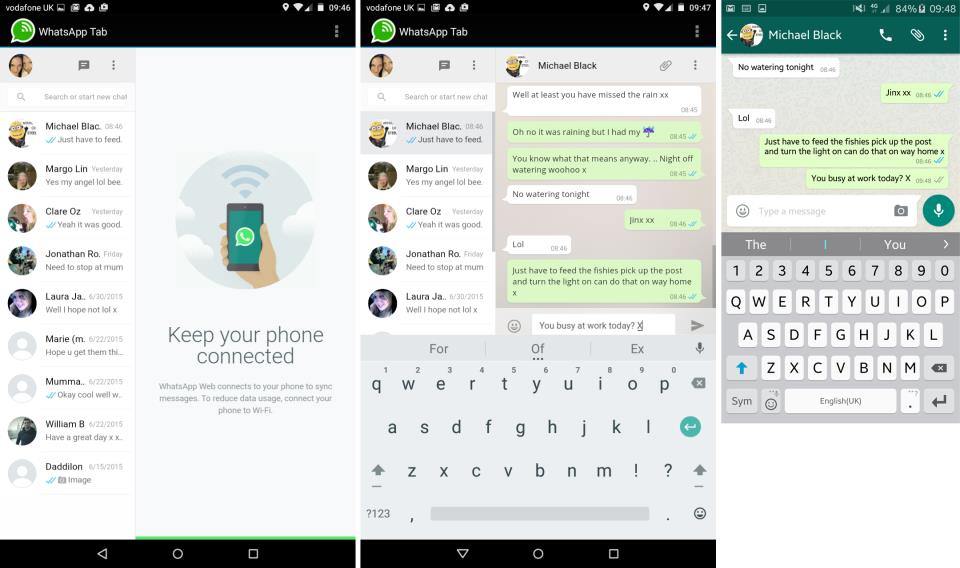 Because most of the time you’ll be using WhatsApp on your phone rather than your tablet, you won’t necessarily want to get notifications of new messages on each. In the WhatsApp tablet app select the three vertical dots icon at the top of the left panel (which shows either your contacts or your conversations), then choose Notifications. You can turn off Desktop alerts and sounds forever, or for a set period. To create a new conversation on your tablet tap the speech bubble next to this three dots icon and select a contact from the list. 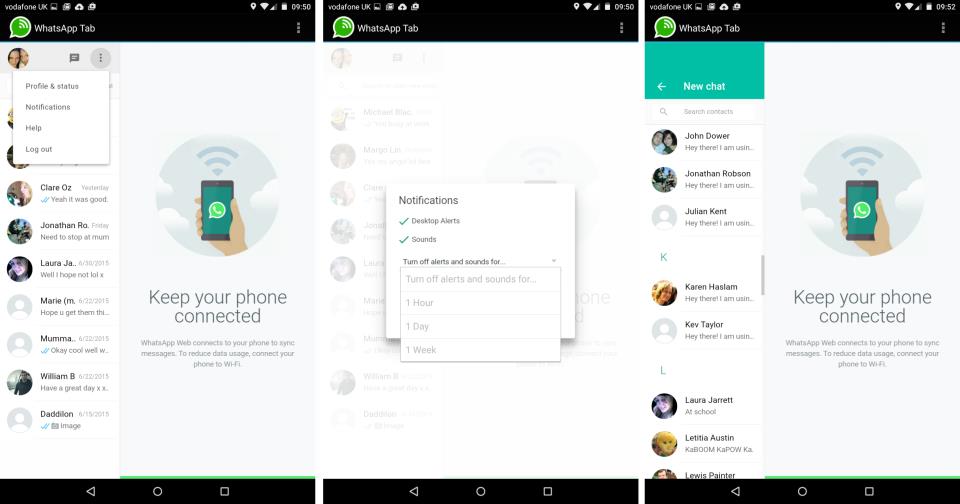