I remember when I first started using IM applications, a long decade ago, how excited I was by the presence of emoticons. Instead of typing long sentences, you could convey a lot of feelings in one character, and given that I’m the kind of person who uses facial expressions extensively in real life, emoticons felt like the most authentic written-form translation of my speech.

Prior to Jelly Bean, Android users were left in the cold when it came to emojis. Only a few third-party applications like Whatsapp or Google Talk supported them within their own confines. But if you received emojis from a friend’s iPhone through SMS or on Twitter for example, you were faced with a square placeholder. Thankfully, the situation has changed with Jelly Bean, and now Android can not only read emojis, but it can also write them. Here’s the complete guide.

Does My Device Support Emojis?

Here is the easiest way for you to know if your Android device can read and type emojis. Go to http://en.m.wikipedia.org/wiki/Emoji on your phone’s browser and scroll down to the “Emoji in the Unicode standard section”. Expand it and go to the emoji tables. If you can see most of the characters there, you’re good. Your Android device comes with an emoji font and you don’t have to do anything.

If, however, you see almost nothing but blank squares, then your device can’t read emojis. Your two solutions then would be to either stick to apps that support emojis — Whatsapp, Hangouts, Handcent SMS with its Emoji Plugin, GO SMS Pro and its Emoji Plugin… — or root your device and flash an emoji font. You’ll need to search for the appropriate method to do the latter, because it varies between devices.

Some devices, specifically the Nexus line, have a built-in emoji keyboard in the form of iWnn IME. To check whether you have it or not, go to Settings > Language and Input and look at the list of available keyboards. If iWnn IME is in there, enable it. Now whenever you’re typing text, you can switch the input method to iWnn IME and have a visual keyboard full of nothing but emojis. 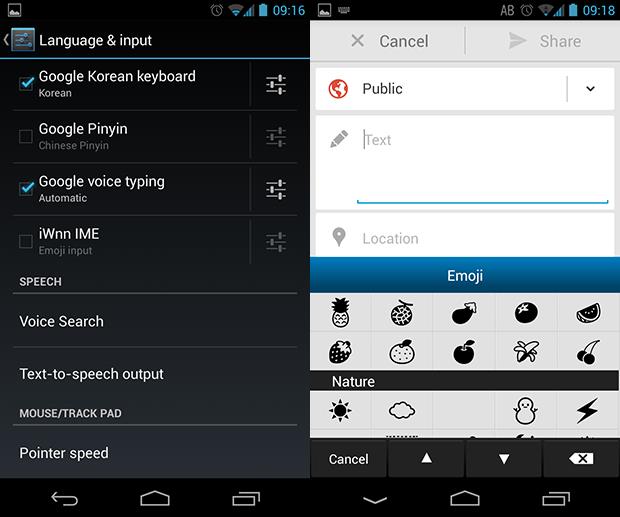 Type Emojis on the Android Keyboard

The other way to type emojis is via the default Android Keyboard — or by installing the Google Keyboard if you own a Samsung or HTC device that doesn’t have the default keyboard pre-installed.

Go to Settings > Language and Input > Android Keyboard (or Google Keyboard) and click on the settings button next to the keyboard. Now scroll down to Add-on Dictionaries and check the list for Emoji for English Words (use Refresh if it doesn’t show up in the list at first). Install it and click Refresh to make sure it shows as Installed. 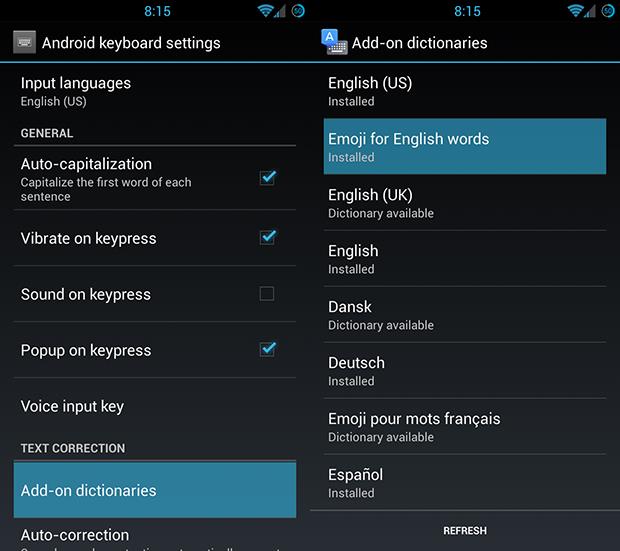 Some people, and I was one of them, face a bug in this step where the plugin would never really install on the default Android keyboard. It would show as Installed, but once you refreshed, it would ask you to install it again. I solved this by installing the Google Keyboard from the Play Store and going through the same steps.

Now, whenever you’re typing text with the Android/Google Keyboard in any app, be it Messaging, Twitter, Google+, or any other, you can use some keywords to trigger emojis. For example “happy” or “smile” add a smiley face. Snowflake adds a snowflake, victory adds the two-finger hand V sign, and so on. 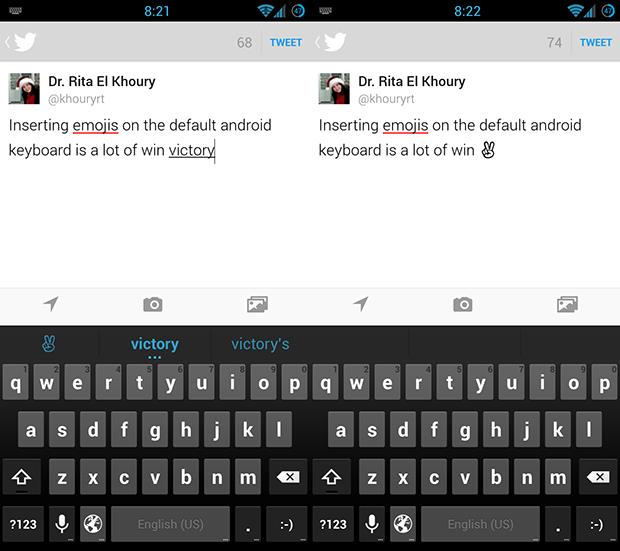 Even though Android supports a lot of emoticons, I wasn’t able to find a complete list of the keyword triggers for them. The biggest list of keywords I found can be downloaded as a PDF here (courtesy of Skangerland).

Type Emojis on Other Keyboards

If you don’t have the iWnn IME keyboard installed, and you’d rather have a visual UI for inserting emoticons instead of having to guess keywords with the Android/Google Keyboard, you have the choice of a few other third-party keyboards that support emoticons, like Kii Keyboard with the Handcent Emoji Plugin, or Multiling O Keyboard with Emoji Codec 2. 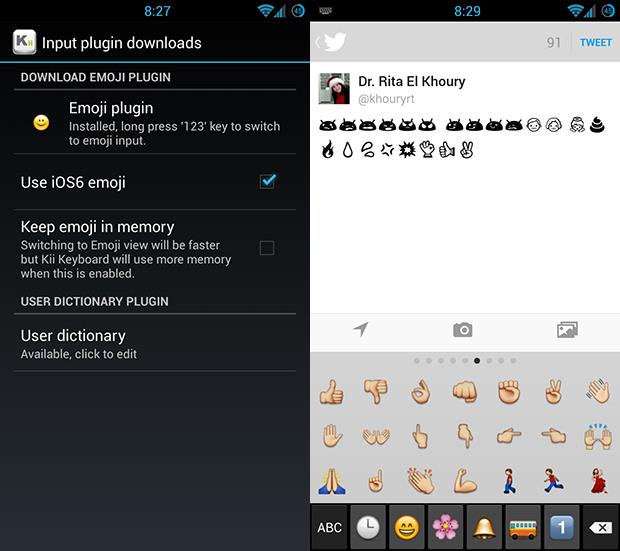 Tip: Create Your Own Emoji Keywords

I personally tried both Kii and Multiling and didn’t find them suitable for my usage. I prefer the default Android/Google Keyboard, but as I explained above, there is no complete list of emoji keywords. Notably missing from Skangerland’s list are keywords for facial expression emojis — which I use all the time.

For a while, I kept jumping back and forth between the default keyboard and Kii to insert those emojis, but I eventually thought of a solution — and a brilliant one at that, if I may say so! Since the Android/Google Keyboard supports a personal dictionary with shortcuts, all you’d have to do is create word shortcuts for your most-used emojis!

In order to do this, you’ll have to have both the Android (or Google) keyboard installed, and another keyboard with a visual emoji UI — iWnn IME, Kii, Multiling, etc. Go to Settings > Language and Input > Android (or Google) Keyboard. Click on the Settings icon and scroll to Personal Dictionary. Tap the + button and:

Now, whenever you’re using the Android (or Google) keyboard, in any application, you can simply type the keyword you picked and you will get the emoji(s) as one of the suggestions. Neat, isn’t it? 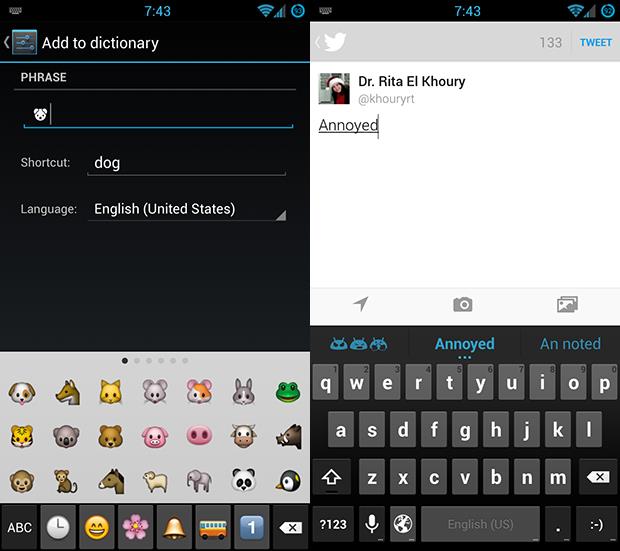 If you don’t see the suggestions right away, give it a few minutes, close your keyboard and reopen it, or restart your phone. They should be there by then.

Which One Do You Use?

Emojis are becoming even more popular and ubiquitous nowadays, and thanks to the openness of Android, there are a multitude of ways to use them, whether limited by specific apps, or available system-wide through pre-installed or third-party apps. This guide was meant to present you with the different methods for using Emojis and let you pick your preferred one. Which one did you settle on, and why?