Update (Dec. 2015) – Bluetooth App Sender described in this older post is not available now at Google Play Store so it is kinda obsolete piece of software now. Many excellent alternatives to Buetooth App Sender are available now which can do the job better. SHAREit is one such free app with way more advanced feature-set than any other app in it’s category. Best of all it can use all available sharing protocols (WiFi Direct, Bluetooth, NFC etc) to transfer data – so rather than using the slow Bluetooth connection SHAREit allows you to transfer data at lightning fast speeds via WiFi Direct (Note however that all Android phones, especially the low-end ones, do not have WiFi Direct/NFC features). With SHAREit you can transfer virtually everything between two supported devices (Android/iOS devices, PC) including installed apps as apk files, videos, audio files, documents, contacts, messages etc. Thus SHAREit can be used to share any file while Bluetooth App Sender can transfer installed apps only. The only negative with SHAREit (and other such apps) is that it must be installed in both the phones (receiver and sender). While Bluetooth App Sender does not require itself to be installed in receiver device. If you still want to know about and get Bluetooth App Sender then you may read rest of the post.

Easily send installed apps from one Android phone to other via Bluetooth (no root required) So you find an app/game in someone else’ Android phone and wish to get it transferred to your phone instantly – rather than going for the slower way of downloading from PlayStore (which also requires huge data transfers in case of big games and some apps and thus cost you money). There are many ways to do this, however I will tell you the easiest/quickest one – no root required. Here is how you can easily transfer an already installed app from one Android phone to other via Bluetooth –

For this you will require a small, free app called Bluetooth App Sender (some other similar apps are also available at PlayStore) – you can download it from here. We need Bluetooth App Sender installed in the source phone only to send the apps. The good thing about BA Sender is that it can send itself too so that you can install it to other phone when required (thus keep it in your phone always).

Once BA Sender is installed, its damn simple to send any app installed in the phone, just follow the steps as described below – 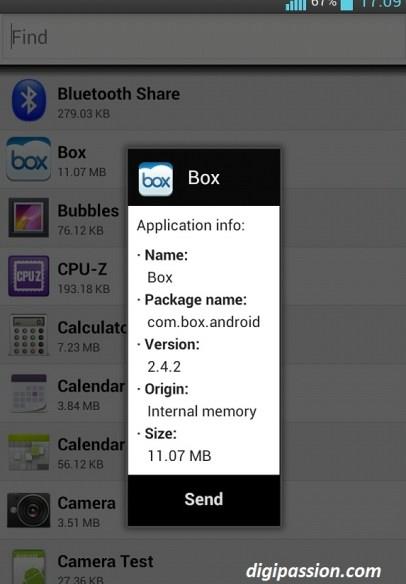 Launch BA Sender – a list of installed apps will appear

A popup will appear with details of the app and a “Send” button (as shown in the screen shot above) – to send the app via Bluetooth just tap this “Send” button – a list of send options will popup – select Bluetooth from the list (you can also use other sending options like Messaging, Gmail, E-mail, WiFi Direct, Box etc) – activate Bluetooth and select the destination phone (make sure Bluetooth is on and is visible/discoverable to nearby devices in the receiver phone) – Bluetooth App Sender will send the app in the form of an apk file – accept at the receiver phone – when received you can install it in the destination phone. Simple!

This way you can send installed apps apk files to any device including computer. Note however only base apk file is transferred via this method, no extra app data (cache or downloaded files if any) will be sent to receiver phone.