Desktop IMs have long been our favorite mode of communication. But with time, their significance has definitely come down.

Smartphones taking large part of our daily life, IM services like Whatsapp, iMessage, BBM,  etc have emerged to be exchanging more messages every second. WhatsApp delivers more than 1 billion messages per day, but yet, its the most insecure way of communication. 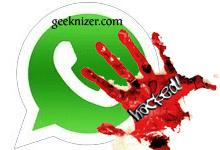 As per a recent security analysis, WhatsApp is totally insecure way of communicating with friends.

You will be surprised to know that until August 2012, messages sent through the WhatsApp service were not encrypted in any way, everything was sent in plaintext. That means if you were using Whatsapp on a public wifi, everything can be captured by anyone else sniffing ont he wireless network. The latest WhatsApp uses encryption but its this new encryption is broken. But still, phone number is sent out in plaintext.

If you know XMPP, the same protocol used by facebook, GTalk, and several others, you can try your hands-on WhatsAPI, an API for WhatsApp messenger.

1. WhatsApp Authentication / Login Mechanism Just like any other XMPP, WhatsApp uses jabber id and password to login. The password is hashed, stored in servers upon account creation and used transparently everytime the client connects the server.

Its an incredibly horrible implementation. As researcher found out, the username is the user’s phone number – an attacker would probably already knows the victim’s number.

On Android, the password is a md5 hash of the reversed IMEI number:

On iOS, the password is generated from the devices WLAN MAC address:

Both IMEI and MAC address are easily retrievable from devices if you have physical access to it. MAC address is much easier to capture as you can sniff on the wireless network to which iOS device is connected.

The JID is a concatenation between your country’s code and mobile number.

Initial login uses Digest Access Authentication. You can try this for yourself:

The response you would receive would be in XML, containing messages designated for your phone.

Photos, Videos and Audio files shared with WhatsApp contacts are HTTP-uploaded to a server before being sent to the recipient(s) along with Base64 thumbnail of media file (if applicable) along with the generated HTTP link as the message body.

WhatsApp shares your contacts with the server, we all know that. But the way it is done is ridiculously insecure. It basically sends contact information as:

Key “P” is the users phone number, Key “T” seems to be the uptime(?), Key “S” is the users status message. Not sure about “JID” and “NP” yet – if you have smart guess let me know. All this information is public.

WhatsApp is fastest growing IM service and yet, the most insecure. If you really care about your data privacy, stop using WhatsApp till its fixed. Rely on GTalk, facebook IM, which are proven to be secure by all means.

We write latest and greatest in Tech Guides, Apple, iPhone, Tablets, Android,  Open Source, Latest in Tech, subscribe to us @geeknizer on Twitter OR Google+or on Facebook Fanpage