Can I record the WhatsApp voice calls ? Hey Guys I am again with another useful trick about WhatsApp. We know that WhatsApp is one of the most popular messaging application used to send text message, images, GIF, videos, documents, user location, audio files, phone contacts and voice notes. WhatsApp is fully secured with end to end encryption. The number of users on WhatsApp is now in billions which is growing year by year.  According to a post on company’s blog , more than 100 millions voice calls made per day on WhatsApp. WhatsApp crossed 200 million monthly active users in India by February 2017.

Recently, WhatsApp introduced the new facility of video calling which made it complete. Now it replaced all video calling applications and after one more upgrade WhatsApp added one more feature as Status which is just like to Story  on the Facebook messenger and Instagram. In Status you can upload any Photo or Video which can be seen by each one of your contact for 24 hours. You can hide it from some selected contacts by setting the privacy.

WhatsApp is firstly available for only Apple Devices  followed by symbian platform for Nokia symbian devices but now WhatsApp Messenger Application is available for every platform like Android, Windows  phone , Windows PC , Mac and iOS devices.

So now WhatsApp is used to make voice and video calls for free by using internet. So users started calling the friends, relatives and colleagues on WhatsApp. Also try How to Activate Developer Option In Androids Some time it is required to record the voice calls, Voice calls recording feature is already available in Android devices. But WhatsApp voice calls can not be recorded by this inbuilt application of Android devices.  Voice call recording feature is useful for future references. So now problem arises that how to record the WhatsApp Voice calls. So here is the trick to doing so, use this trick to record the WhatsApp voice calls.

WhatsApp Voice calls can be recorded using this application so just follow the following steps to record the WhatsApp calls.

Step-1. Go to playstore Search for the Call Recorder for Messenger , download and install it. 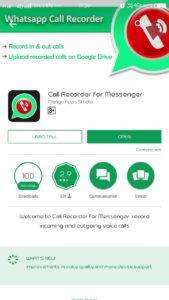 Step-2. Launch the application, now  floating Options are there on your screen, Enable it. 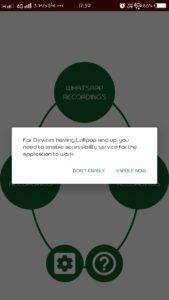 Step-3. After tapping on Enable Now, you are redirected to accessibility menu of your Android device so select the call Recorder application and turn it on. 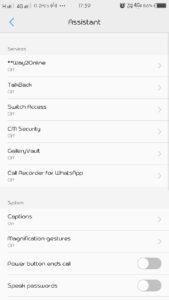 Step-4. By default it will record all voice calls Incoming and outgoing. So if you want to record any one then go to setting of the application and choose the desired one.

Now It is all set , you are ready to record your WhatsApp Calls. Whenever you are calling from WhatsApp, all the calls are recorded automatically. To listen the recordings, open the application and Tap on the WHATSAPP RECORDINGS icon. Also you have option to explore the recordings by day-wise.