iOS allows users to control what apps can access the images and photos stored on their iPhone, iPad, and iPod touch. This is handled through the Privacy settings and offers granular control over which specific third party applications are allowed to pull images from the Photos app, Camera Roll, and also whether or not they are able to save new images to the on-device storage within Photos app as well.

If you want to adjust or control app access to photos on an iOS device, or you just want to see what apps could theoretically access your devices pictures and save to the on-device image library, here what you’ll want to do. 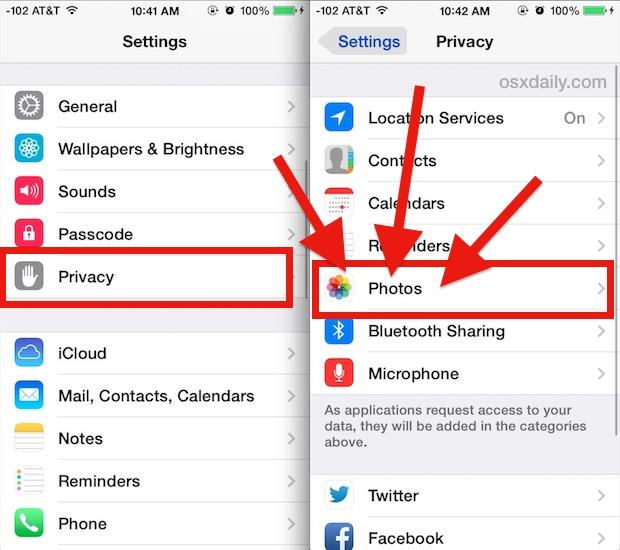 The apps shown in this Privacy > Photos list have requested access to the photos on the iOS device at some point in time. If the settings toggle next to the app name is in the ON position, that means that app can access photos and Camera Roll directly, either to upload new pictures to a service from the iOS device, or to save new pictures to the Photos app. Apps here may also have the ability to create a Photo Album within the Photos app as well. Only apps that are currently stored on the device will be listed here, anything that has been removed or uninstalled won’t show up in the list.

If you want to prevent an app from having access to your iPhone / iPad photos, flip the toggle to the OFF position. This prevents access to images and also removes the ability for that app to save pictures to the camera roll. Allowing access is done by adjusting the switch to the ON position. 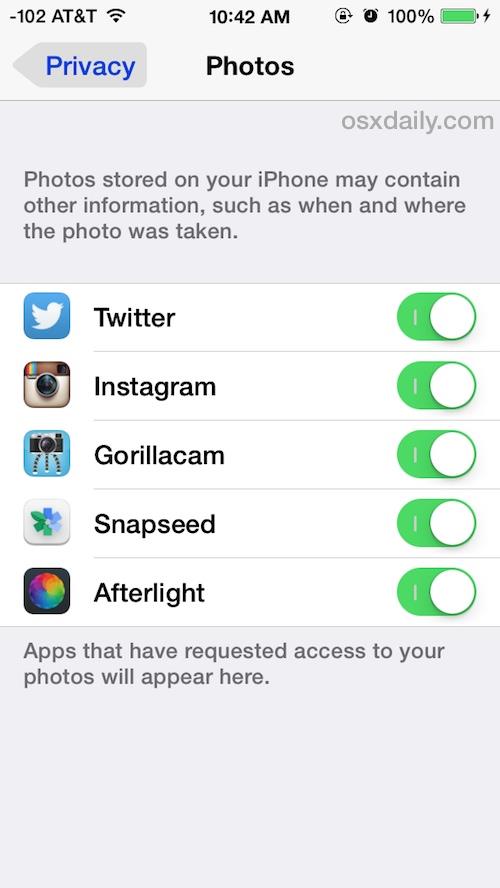 Generally speaking, apps that make logical sense to have access to the device photos should be listed here. For example, that may include photo editor apps like iPhoto, Photoshop, Flickr, VSCO, and Snapseed, and also social sharing and social network apps like Facebook, Instagram, Twitter, or Tinder – these are all apps that have legitimate reasons to access pictures stored on the iOS device. On the other hand, if an app looks out of place in this list, like a random game or some app that has nothing to do with images or sharing at all, you may want to consider disabling it.

For those interested in limiting access to broader personal information stored on an iPhone or iPad, iOS also offers similar controls for Contact information and address book details, allowing users to block apps from seeing contacts if desired.