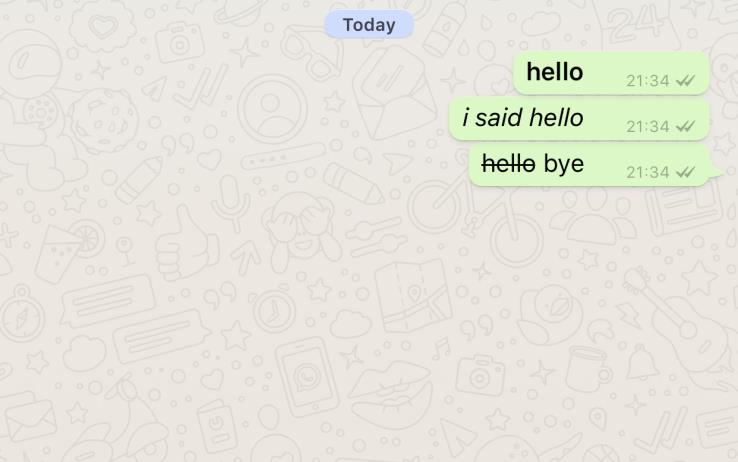 WhatsApp, unlike many messaging apps, it has not introduced too many new features since its launch, apart from voice calls, with the team preferring to keep things simple. Yes, its simple and easy to use unlike other messaging apps like Snapchat, Telegram, Tinder etc which have added payments, bots, stcikers, emojies, trophies and many more features to provide increased functionality. Recently, it added the ability to add text formatting such WhatsApp bold, WhatsApp Italics and WhatsApp Strikethrough.

WhatsApp is now the number one cross-platform messenger. According to the latest statistics available, WhatsApp has now one billion active users, WhatsApp now handles some 42 billion messages and 250 million videos every day of the week. Facebook purchased the platform in 2014 for $19 billion (£13 billion) in 2014, and has continued to run the service parallel to its own standalone Messenger app. The app recently dropped its annual subscription fee of $1, or for those who downloaded it before July 2013, the upfront fee.

WhatsApp most recent update i.e March 2016 now includes the ability to add text formatting such bold, italics and strikethrough. This means users will be able to stress the fact that their message is going too long unanswered by using italics, or use strikethrough to change their thought. This updates is available to its iOS and Android apps.

WhatsApp users can now stress their points a little bit more when messaging others in the app. As per the reports, the new feature was first tested in beta version, it is now available for users running version 2.12.17 on iOS and version 2.12.535 for Android.

How to add WhatsApp Bold, Italics and on WhatsApp?

If you have updated to the latest WhatsApp version, and some of your friends have already updated their apps and started using this new feature, you probably see Bold, Italics and Strikethroughs in their messages. It’s not obvious how to access the new options since the App does not include them in the selection menu , you can however access by pressing and holding on a word in iOS. Learning how to master the format options is quite easy, all you have to do is remember the keyboard commands.

These new text formatting styles can also be entered in the WhatsApp Web client,  but the formatting will only show up in the App-based version of chats.

Why is it not working? If have entered correctly as instructed above, you must be probably using the older version, please note that WhatsApp version which supported this new feature is version 2.12.17 on iOS and version 2.12.535 for Android.  Make sure you have this version installed, if you haven’t go the Google Play Store for Android and Apple App Market for iOS devices. In case, you don;t how to update your Apps, here’s a short instructions;

How to update on  Android App

1. Open the Google Play Store from your Android or tablet desktop. 2. Tap the menu button and select Settings. 3. Simply tap the box where it says ‘Auto-Update apps’. in case if you just want to update WhatsApp, tap/select WhatsApp and again Tap the “Update” button. Done.

How to Update an App on Your iPhone 1. Open the iTunes App Store on your iPhone 2. Tap the Updates icon at the bottom of the screen. 3. Click the Updates icon, located in the bottom-right corner of the screen. 4. If you see (in the middle of the screen) a message that says, “All Apps are Up-to-date,” then none of the apps on your iPhone require an update at this time. If an app needs updating, it appears with an Update button next to it. 5. If you want to update on WhatsApp Tap the button to update the app. Done.

That’s it on how to add WhatsApp Bold, WhatsApp Italics and WhatsApp Strikethroughs Text.