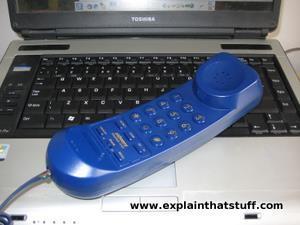 Do you ever find yourself looking at your watch and thinking “This call’s costing me a fortune.” If you do, you’re still stuck in the 20th century with telephone technology that’s barely changed since the 19th! In the 21st century, there’s no reason why we should be paying through the nose, by the minute, to use a telephone network when most of us now have access to a very credible alternative: the Internet. After all, if the Internet (which relies on large parts of the telephone network) can carry text, images, and video clips, it should be able to carry people’s voices just as easily. That’s the thinking behind VoIP (Voice Over Internet Protocol) which, simply stated, means using the Internet to make and receive telephone calls. How exactly does it work? What are the advantages and the drawbacks? Let’s take a closer look!

Photo: VoIP means making telephone calls using your computer, with the sound of your voice converted to digital data that travels over the Internet using the Internet Protocol—in other words, in exactly the same way as Web pages, downloads, emails, or any other Internet data.

What is the Internet anyway?

To lots of people, using the Net means looking at YouTube videos or buying books from Amazon.com—but both of these things are really about the World Wide Web, not the Internet. The Internet is the worldwide network that links virtually every modern computer on the planet, and it’s made up of telephone lines, satellite links, fiber-optic cables, and old-fashioned copper wires. The World Wide Web (all those shopping sites, home videos, and so on that you browse from your computer) is just one of the things that uses the Internet; email is another. The Internet is designed so that it can send all kinds of information, in all kinds of different ways, between the various computers that it connects together, and without any kind of rewiring or redesign. That’s why, in the mid-1990s, some clever technical people were able to figure out how to send telephone calls over the Net, much like any other kind of information. This was the birth of VoIP.

All the information that travels over the Net—from the latest music videos on YouTube to the confirmation email from Amazon that your book is on its way—is sent by a method called packet switching. Something like an email, which might be pages and pages of characters, isn’t actually sent as one big chunk: when it leaves your computer, it’s broken down into many small pieces called packets, each of which travels independently across the Internet (theoretically by a completely different route from other packets) before being reassembled into a copy of the original email when it arrives at its destination. It’s a bit like sending a book through the post not as a big fat parcel but by putting every single page into a separate envelope, individually addressed and dispatched. It might sound odd to send things this way, but packet switching is actually an extremely quick and efficient way of handling the billions of emails, web pages, and everything else that has to zip back and forth across the Net every single day. (You can read more about how it works in our main article on how the Internet works.) All the computers connected to the Internet understand how to send and receive packets like this; thankfully, they all agree to work in exactly the same way using exactly the same system, which is known as the Internet Protocol or IP. (One of the key parts of the IP that you may be familiar with is that every computer can be “addressed” by quoting a unique number, known as its IP address, which is a bit like the computer equivalent of a telephone number or building address. Currently most computers have IP addresses made from four pairs of two digits separated by points, such as 12.34.56.78. 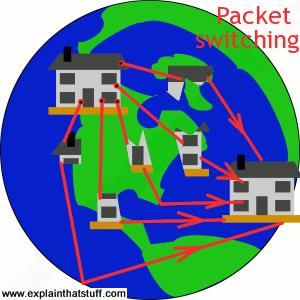 Photo: Packet switching is how data travels over the Internet. It’s a bit like moving house by breaking the building into individual bricks and putting each one in the mail! It sounds crazy, but it works extremely efficiently.

The Internet has only one job to do: to keep packets moving back and forth. The computers, fiber-optic cables, and other systems that make up the Net don’t know what packets they’re moving or why—and they don’t care. A packet might be a piece of a photo you took on holiday in Florida, or it could be part of an email telling someone they’re fired. As long as the data you want to send is in the form of packets, and they’re formatted in the correct way according to the IP, you can send absolutely anything over the Internet.

How does VoIP work?

How, then, do you send a telephone call over the Internet? There are really three separate problems to solve before you can do it: alerting someone that you want to call them, turning your voice into digital sound and sending it over the Net (and receiving replies in the opposite direction), and “interfacing with” (linking in to) the ordinary telephone network, if your call is going to a traditional landline telephone or cellphone (mobile phone). Let’s look at each of these in turn.

When you make a traditional telephone call to a friend, you lift the receiver and listen for the dial tone before punching in someone’s number. What’s happening here is that you’re opening up an electric circuit between your home phone and the telephone exchange. When you dial the number, the exchange opens up a second circuit to the receiver’s phone, causing their handset to ring. As soon as your friend lifts the receiver, there’s a complete circuit open between your two phones and you can start to talk (“send and receive voice data”, if you prefer).

With VoIP, things are different. Internet telephony is much more like cellphone telephony, with people having unique telephone numbers that aren’t permanently linked to one physical location: the person you’re calling could be anywhere on the planet (and might not be in the same place two days running). So the first part of making a VoIP call involves your computer locating the receiver on the Internet, signalling their computer to receive a call, and, once that’s done, the two computers agreeing the technical nitty-gritty of how they will actually exchange the data (just as fax machines and modems “handshake” at the start of a call). For VoIP to work effectively, every computer that uses it has to do these things exactly the same way—and that’s why VoIP systems use carefully agreed international standards (known as protocols). The two protocols that cover signalling are technically known as H.323 and SIP (Session Initiation Protocol, sometimes also known as RFC 4168). Simply speaking, these protocols set up a communication route between two IP addresses (the sender’s and the receiver’s) across which the actual telephone call data can be sent and received.

To send a basic telephone call over the Internet, you have to turn a speaker’s voice into digital (numeric) form. That’s relatively easy and the technology has been around for many years. (For example, when rock bands record CDs or MP3s, the noises they produce with their voices or instruments, which are analog sounds, are converted into numbers, which are digital signals, that can be stored or manipulated by computers. For more about the difference, see our main article on analog versus digital technology. This general process is called analog to digital conversion. When you listen to a CD or MP3, those numbers are converted back into sounds your ears can hear by digital to analog conversion.) The piece of software responsible for this process—converting audio sound into digital data and back again at the other end—is known as a CODEC (Coder-Decoder). The CODECs used for VoIP are designed to work optimally with sounds of frequencies from a few hundred hertz (Hz) up to perhaps 5000Hz or so (the frequency range of the human voice), although since 21st-century phone calls are just as likely to contain video (chat) data as voice sounds, VoIP systems often contain video CODECs as well as audio ones.

Once a spoken voice has been turned into numbers, it’s relatively easy to break it into packets and send it over the Internet to another computer, where it can be reassembled and turned back into the sound of a voice by exactly the reverse process. Again, the computers involved in sending and receiving the data have to work according to the same protocols (agreed methods). The data-sending protocol used in VoIP is called RTP (real-time protocol), and it’s also the protocol that computers use for receiving streaming media (videos you watch as you download them, in real time, over the Internet).

Interfacing with the telephone network

So far, we’ve seen that sending and receiving phone calls between two computers connected via the Internet is relatively simple; it’s broadly the same as chatting online or exchanging emails, except that the data travelling back and forth is digitally encoded sound and travels in real-time. Making a telephone call from a computer to a traditional landline phone (or vice-versa) is more complex because it involves making a link from the Internet to the ordinary phone network (which is technically referred to as the PSTN or Public Switched Telephone Network). That complicates both aspects of VoIP that we discussed above. Call signalling is more complex, because the phone you’re calling might be on either the PSTN or somewhere on the Internet—and it has to be located first. (One solution to this is to assign a special, nongeographical “area code” to VoIP numbers so they can be instantly identified and routed to the Internet.) Sending and receiving a phone call is also more complex because if you’re calling from a VoIP phone to an ordinary landline handset, there’s nothing at the receiving end to convert the digital data back into analog sound. So the data has to be converted before it reaches its destination.

What makes phone calls like this work is an extra piece of equipment known as a gateway, which acts as a bridge between the Internet (on one hand) and the PSTN (on the other). You can think of a gateway as a kind of translator that converts telephone calls in IP-format into traditional signals that ordinary phones can understand (and vice versa). It’s also involved in call signalling, so when you dial a landline from a VoIP phone, the gateway converts the call-signalling data into a format that the PSTN can understand (and rings the landline the old-fashioned way). 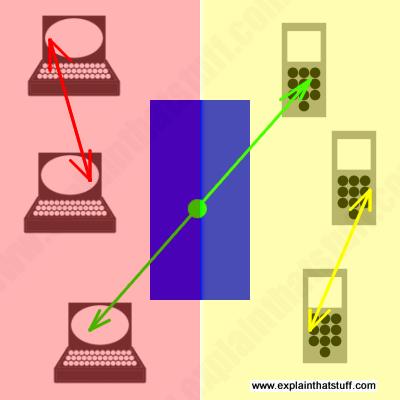 Simply speaking, there are three different kinds of VoIP. The simplest are VoIP telephone handsets that look and work much like traditional telephones, except that instead of being wired to a telephone line, they’re either directly connected to your computer (by something like a USB cable) or indirectly connected to it by a wireless (Wi-Fi) router. You’ll find a slightly different kind of VoIP on cellphones (mobile phones). You make and receive mobile VoIP calls much the same as normal cellphone calls but, instead of calls being sent and received on a permanently open line, like a traditional cellphone call, they’re broken into packets and sent back and forth—rather like a web page that you’re browsing with something like a smart phone. In other words, they’re using packet switching over the cellphone network. A third kind of VoIP is entirely computer based; Skype™ is the best-known example. When you use Skype to call someone, it sets up a more or less direct connection (known as a peer-to-peer or P2P) connection with someone else’s computer, across the Internet. You send and receive text messages, voice data, or webcam chat over this direct link. Apart from the initial logging on process, there is no intermediate computer managing the communication between the sender and receiver, which makes Skype relatively secure compared to other forms of telephone communication.