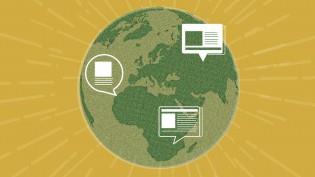 How news sites think about social platforms changes with time.

Five or six years ago, it wasn’t uncommon to see the bottom of a blog post chicken-pocked with a gazillion tiny icons representing social networks familiar and seemingly imaginary. More recently, as Facebook and Twitter have grown, you’ve seen a lot of sites trim that spot down to just those two.

There’s one thing news outlets have been missing in evaluating apps like WhatsApp: good analytics. There’s not an easy way to tell if that visit to your website a moment ago came from a chat app, because it doesn’t leave a referer. It’s the very definition of dark social. And without numbers, it’s hard to know how much to optimize for WhatsApp traffic. Recode reported back in February that BuzzFeed seemed to be seeing terrific WhatsApp sharing action, but the data was still rough:

“Every time we looked at WhatsApp’s numbers, it blew us away,” said BuzzFeed president Jon Steinberg. “We knew last April this was a huge social network and have become increasingly obsessed with it.”

But the WhatsApp tool is still very basic. “We only have click data, not referral data,” McCollum said. “So we know if you clicked the share button in mobile Web, but we don’t know (yet) if you shared in on a group text with 15 people and 15 people clicked it or if you shared it with one person.”

That’s why I’m pleased to be able to share with you some actual hard data that looks at both the sharing piece and the traffic piece. It’s from an unusual source: the Spanish soccer club Valencia, currently sitting in third place in La Liga behind more internationally famous clubs Real Madrid and Barcelona.

Valencia, like most sports teams, has its own website where it publishes news stories about the team. And on the mobile version of its news stories, it includes four sharing buttons: Twitter, Facebook, Google+, and WhatsApp. It captures both click data (how many times each of those buttons was tapped) and, crucially, traffic data, by adding a URL parameter that helps them tell which service the reader is coming from.

So armed, Valencia is able to tell what platforms are most important for sharing. Here’s what it found. (This data comes from Daniel Ayers, who works for the sports-focused digital consultancy Seven League and has been serving as Valencia’s acting head of digital.)

That’s a remarkably good showing for WhatsApp — even more remarkable when you realize that the WhatsApp button doesn’t even appear on desktops or laptops, only on mobile devices. (Technically it appears in any web browser no more than 740 pixels wide, which basically means smartphones.) So what happens if you only look at mobile shares?

WhatsApp gets nearly half of the sharing taps on mobile.

But what about traffic? Did those taps turn into lots of visits? Let’s go back to the larger dataset, mobile and desktop/laptop combined. What share of the visits did taps on each of those buttons produce? Facebook 27%, WhatsApp 48%, Twitter 22%, Google+ 3%.

That’s crazy. Of those four sharing buttons on mobile, WhatsApp is generating more than two-thirds of the visits for Valencia. 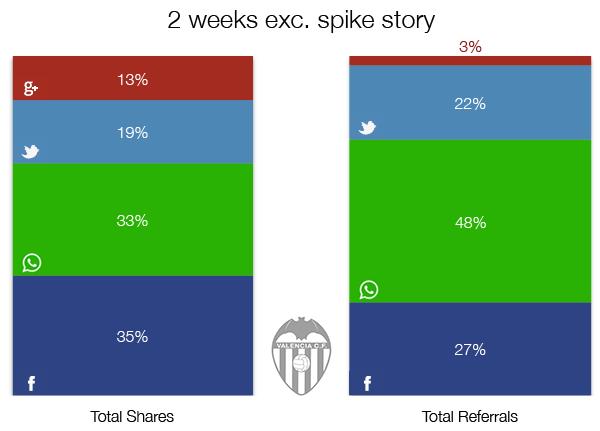 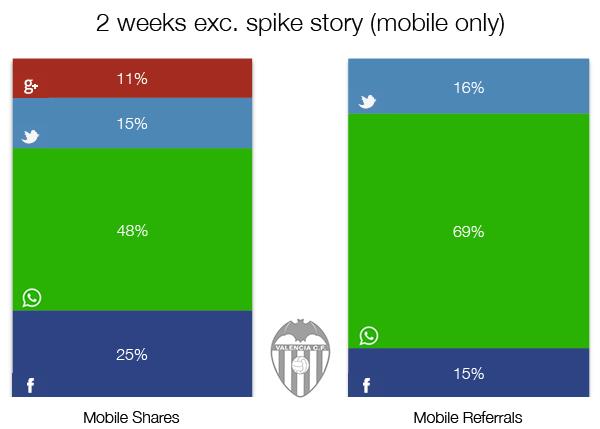 Now, before you go make your news site one giant green WhatsApp button, there are two very important caveats to this data.

The first is national context. User behavior in Spain may not match user behavior in your country. As of earlier this year, 65 percent of Spain’s mobile Internet users were using WhatsApp; the equivalent number in the United States was just 8 percent.

In other countries, particularly in Asia, other chat apps (Kakao Talk, Line, WeChat) dominate the market. And chat apps haven’t taken off here in the U.S. to the degree they have in the rest of the world, where carrier (SMS) and smartphone-specific (iMessage, BBM) platforms are more popular.

But nonetheless, whether it’s WhatsApp or something else, it’s likely this generation of platforms will keep growing.