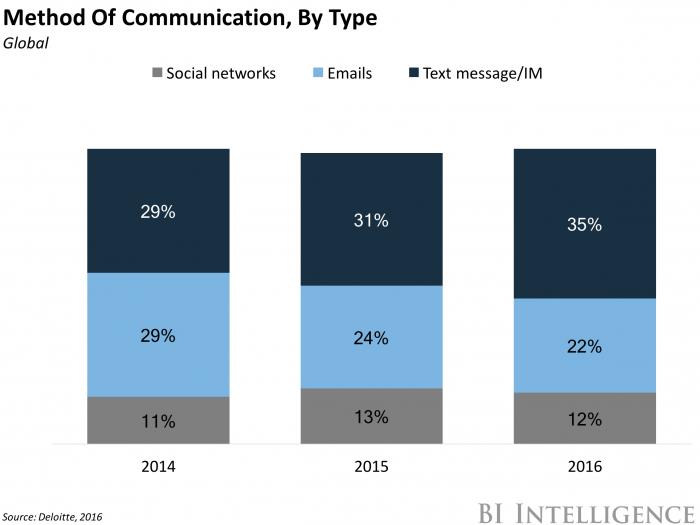 Email was once at the forefront of convenience. Used as a way to quickly send messages and share files from anywhere in the world, it was — and, for many, still is — a primary tool to communicate with friends, family, and colleagues.

However, over the past several years, the proliferation of chat apps, SMS, and social messaging platforms has largely displaced this more traditional form of online messaging. In 2016, instant messaging and texting  (e.g. SMS and chat apps) were the first things 35% of US consumers checked in the morning, according to Deloitte, up from 29% in 2014. Meanwhile, 22% of US consumers checked their email first, down from 29% in 2014. And as these communication channels enhance their capabilities and add more functionality, the threat to email’s sustainability will increase.

But is email the next legacy technology to fall prey to obsolescence? The short answer is no. However, it’s worth looking more closely at shifting user behavior when it comes to online communication — whether it’s at home, on-the-go, or in the workplace.

The saturation of premium smartphones in many mature markets, and the existence of mobile-first economies such as China, means that mobile devices are everywhere. This gives users immediate and consistent access to other people and businesses with the touch of a button through means like social media, chat apps, and email.

This proliferation is beginning to impact the way people communicate, not only with each other, but with businesses, too.

Chat apps are altering consumer behavior. The wide adoption of chat apps and texting is remodeling the way people communicate online, including via email. A study by Adobe found that almost 70% of respondents believe text messaging is resulting in shorter, less formal emails.

Chat apps are replacing email as the preferred mode of business-to-consumer interaction. More and more millennials — those between 18 and 34 years old — are finding that chat apps are a more reliable and convenient way to reach brands and service providers, according to an Ovum survey of millennials in the US and Germany. Around half of respondents noted they preferred to interact with a service provider via chat for several reasons, including the desire to achieve a swift resolution to a problem and the idea that they don’t have to use a separate service or app to achieve this resolution.

To learn more about chat apps and chatbots, you can read BI Intelligence’s detailed chatbots report.

Communication In The Workplace 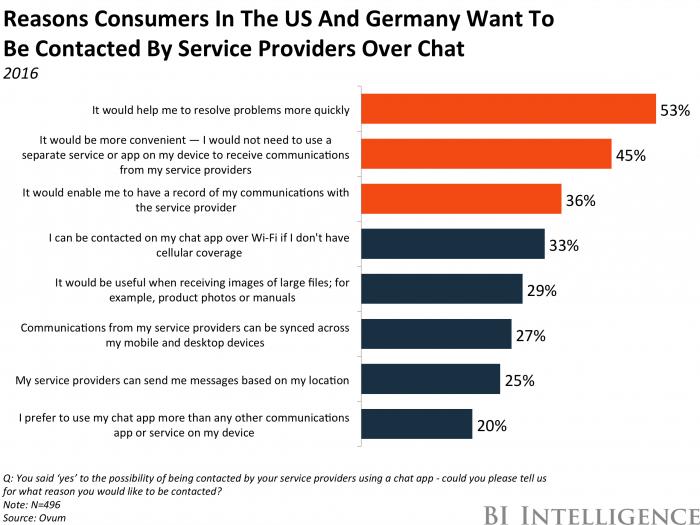 Several trends that have emerged over the past 18 months or so point to the decline of email as the primary mode of communication in the workplace. These range from an overall shift in user behavior to the widespread adoption of chat apps, which boast a growing list of functions and capabilities.

The emergence of less formal, more engaging modes of workplace communication is most obvious in the adoption apps like Slack and the growing trend in using social networking apps such as Facebook Workplace. Chat apps are proving successful in the workplace for several reasons:

Chat apps are convenient. Chat apps support quick and easy-to-access communication, and enable businesses and users to communicate with those who may not have an email address. For instance, many doctors in Brazil use WhatsApp to converse with patients, schedule appointments, and share test results.

They are used as a collaboration tool. Chat apps like Slack offer employees the ability to engage with multiple colleagues at one time as well as instantly upload and share documents and files without having to leave the app, potentially enhancing productivity.

Internet security is increasingly becoming a priority for both businesses and consumers as threats from hackers become more prevalent. A survey of 1,250 registered US voters showed that a decisive 84% of respondents consider personal data protection very important, according to Purple Insights.

Chat apps provide an appealing alternative to email by offering superior data security. For example, following Hillary Clinton’s notorious email scandal, her staff began utilizing Signal, a highly secure chat app that encrypts data automatically. And while not all chat apps provide the same level of security as Signal offers, a majority of the big-name apps provide varying degrees of data and communication security for consumers. Here are a few examples of such apps:

Other chat apps offer users the ability to opt in to encryption. That’s because artificial intelligence (AI) powered virtual assistants and software require access to the information users are putting into their messages in order to work. However, these chat apps also recognize the importance of personal security. A compromise is to allow users to choose when they encrypt their messages. Here are two examples:

In the workplace, though, businesses still face serious risk to enterprise security by implementing chat apps. Viruses, spam, malware and phishing attacks, data leakage, and inappropriate use are among some of risks associated with employing chat apps in the workplace.

Despite current trends, email maintains an entrenched position as a trusted form of communication among consumers. Because of this, email will persist as a legacy mode of communication, both within the workplace and between private correspondence, much as using pen and paper has since the proliferation of the internet. In fact, we project that it’ll be at least five years before most of the younger generation of users join the workforce and further diminish email’s relevance in the workplace. 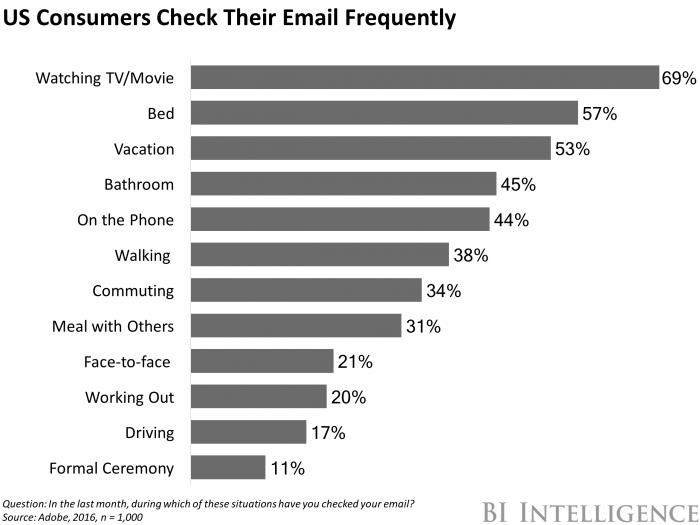 Email is still seen as a primary mode of communication. Consumer behavior is often slow to change, and email is still the most used communication tool for older generations. This preference is often passed down to members of younger generations. In the short term, email usage is even expected to increase, according to Adobe. However, this is largely because of the global adoption of smartphones, which has boosted the access users have to their email accounts.

To receive stories like this one directly to your inbox every morning, sign up for the Apps and Platforms Briefing newsletter. Click here to learn more about how you can gain risk-free access today.