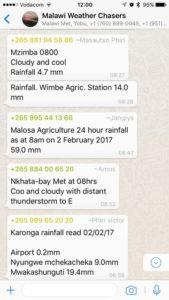 Innovation in collecting and disseminating climate information need not be complex as a group in Malawi has found by using a WhatsApp group to send out weather information, and to request actual observations from members in order to verify forecasts and ultimately improve their reliability. The UMFULA project’s Katharine Vincent looks at the effective new method.

Floods are a major problem in Malawi. In 2015 major floods affected the southern region after a day of unprecedented high rainfall. Over 500mm rain fell in one day – well over a third of what is expected in a year; and this was followed by with over 250mm of rain in one day, less than two weeks later. The resulting floods led to loss of life and destruction to property and infrastructure estimated to cost nearly $500 million.

Reducing the damage from floods requires three elements: robust scientific information (forecasts and monitoring); widespread understanding of how to respond to various alert levels and, critically, effective communication which links the two. The development of meteorological science means that weather forecasters now have greater skill and, with the aid of hydro-meteorological monitoring, we are better able to identify potential flood conditions. The Department of Disaster Management Affairs, with the support of many NGOs, has been building awareness at local level of how to respond to flood alerts. Village Civil Protection Committees are trained in the different levels of alert and what they should do. However, these efforts amount to little if the warnings are not communicated effectively and in a timely manner.

This challenge has been keenly noted by the Department of Climate Change and Meteorological Services (DCCMS). According to Malawi meteorologist and weather broadcaster, Yobu Kachiwanda, “Early Warning Systems are central to reducing disaster damage in Malawi. At the moment it is not clear whether the system is capable of generating and disseminating timely and meaningful warning information to enable individuals, communities and organisations threatened by extreme events to prepare in sufficient time to reduce the possibility of harm or loss”.

Typically, early warning system alerts have been broadcast via radio and television. However, valuable time is lost in the process of getting the message from the DCCMS to the stations, and for them to then broadcast it, getting the information to people on the ground. Recognising that almost everyone now has access to a cell phone in Malawi, the DCCMS has seized the opportunity to close the communication gap by sending out the alerts by WhatsApp. The alert is received more quickly and provides more time for appropriate action.

The “Weather Chasers Malawi” WhatsApp group was created by the DCCMS in January 2016 under the Common Alert Protocol. It has been so popular that it rapidly reached the app limit of 256 members, and they are currently investigating other platforms to expand access. As well as for early warnings for storms, floods and lightning, the medium is used to disseminate the 24 hour forecast as appears on evening television and in daily newspapers. Daily observations recorded by the registered keepers from 21 weather stations are also sent through the list. DCCMS is thus able to record centrally but, in the process, interested parties are able to obtain up-to-date information for their areas of interest.

The difference between dissemination of information and communication is that the former is one-way and the latter two-way. Disseminating weather forecasts and early warning alerts through cell phone technology has been trialled in various small scale pilots across southern Africa. However, DCCMS recognised a broader opportunity for innovation in climate services. If they can send information out, then the members of the list can also provide them with details that can inform the reliability of their forecasts and improve future warning services.

Participants on the “Weather Chasers Malawi” WhatsApp group are encouraged to send in their own observations of weather conditions – with location and time. This is an example of citizen science, where laypeople are able to contribute to scientific development. The “spotter reports” provide information to ground truth forecasts to DCCMS. Reported observations can confirm hazardous weather detected by the satellites, but they can also identify where the forecasts are frequently inconsistent with observed conditions. As Mr Kachiwanda explains, “Spotters act as our eyes and ears in the field, and provide critical verification that helps improve future warning services.”

This WhatsApp group thus acts as a two-way communication channel. On the one hand, DCCMS can disseminate forecasts and early warning. On the other hand, it facilitates the transmission of feedback through spotter reports which can be used to improve the quality of future forecasts and warning services. Technology is thus playing a vital link in the chain to ensure reduction in negative impacts from weather events in Malawi.