The Bad-Ass Librarians of Timbuktu and Their Race to Save the World’s Most Precious Manuscripts by Joshua Hammer. Simon and Schuster, 278 pages, $26. 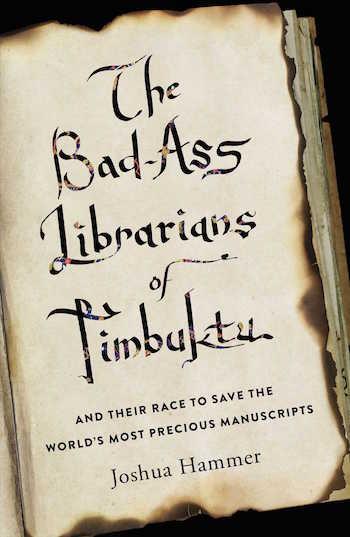 If there were a National Book Award for Best Title, The Bad-Ass Librarians of Timbuktu would be a serious contender. The moniker has it all: swashbuckling idiom, stereotype-smashing reference, exotic-verging-on-mythic locale. Featuring a cover jacket image of a book charred at the edges, the Simon & Schuster marketing department hit it out of the park.

Former Newsweek bureau chief Joshua Hammer, one of a vanishing generation of journalists who seems to have stacked up enough employer-and foundation-reimbursed frequent flier miles to go to the moon for free, has documented a timely story of cultural heroism. You’ve no doubt read about the Taliban’s dynamiting of the monumental fourth- and fifth-century Buddhas of the Bamiyan Valley, sweetly resurrected in memorial holograms; ISIL’s destruction of the Temple of Baalshamin in Palmyra; and the horrific beheading of 82-year-old Syrian archaeologist Khaled al-Asaad, who refused to reveal where the artifacts he had spent his life conserving had been hidden. Jihadist fundamentalists lay claim to historical fidelity, but many are eager to erase the cultural patrimony of the communities under their control.

Abdel Kader Haidara is one of the good guys. The Malian archivist was born into a family of cultural treasure-keepers that had been assembling Arabic illuminated manuscripts of the Koran, medical treatises, astronomy, poetry and more — including at least one book containing sexual advice — since the 16th century. When he died in 1981, says Hammer, Haidara’s father left 5,000 volumes in Timbuktu and almost 40,000 in the ancestral home in Bamba. By terms of the will, the library could not be sold: it had to be protected. As Hammer notes early in this book, this archive and others like it demonstrated that “a sophisticated, freethinking society had thrived in the Sahara at a time when much of Europe was still mired in the Middle Ages.” (Hegel, as it turned out, was one of the supremacists Hammer cites as dismissing Africa as “the Unhistorical, Undeveloped Spirit.”)

Scribes, paid in gold dust and nuggets, could copy one book every two months — and seem to have employed copy editors more meticulous than the ones who proofed this volume for S&S. Hammer describes the elaborate system of publishing ateliers, similar to those evoked in Orhan Pamuk’s 1998 novel of medieval Istanbul, My Name Is Red. Any reader who hasn’t sold her soul entirely to the digital realm will love this stuff.

No wonder Haidara became a librarian. Hired by the Ahmed Baba Institute in 1984, the multilingual Haidara received further education in connoisseurship and manuscript appraisal. He began traveling to remote African villages, often by motorized longboat, to bring manuscripts to the Institute where they could be conserved, catalogued, and shared. Sometimes he paid money, sometimes he received manuscripts in exchange for building a school, or providing a villager with a cow. This is the most enchanting part of Hammer’s report.

The story gets messier when he tries to explain how all of this was funded. Kuwait, Saudi Arabia, Norway, and South Africa all subsidized the institute. Later, when Al-Qaeda and freelance jihadis begin to threaten and then commit cultural destruction, the librarian and his staff get busy fundraising for what they estimate will be a $700,000 rescue enterprise. They even set up a Kickstarter campaign. How was it possible that these activities went unnoticed by their enemies even as they were soliciting their friends in high places? I presume Hammer knows but declines to mention it.

Telling the story of Haidara’s efforts against the background of a war that many in the West are only dimly aware of required that Hammer outline the upheavals that have taken place in Mali since colonial times. He goes back to the precolonial era, and sketches the Islamic internecine wars of the 1990s, the challenge between jihadist fighters and secular Tuareg independence fighters, and beyond. He’s done his homework, but the paramilitary history between groups with changing names and allegiances desiccates. The challenge facing those badass librarians recedes for chapters at a time. There’s a glimpse of other cultural enterprises, particularly the rise and fall of the Festival in the Desert and the Tuareg band Tinariwen (which has played in Boston under the auspices of World Music/CRASHarts), but the narrative becomes mired in Saharan sand. 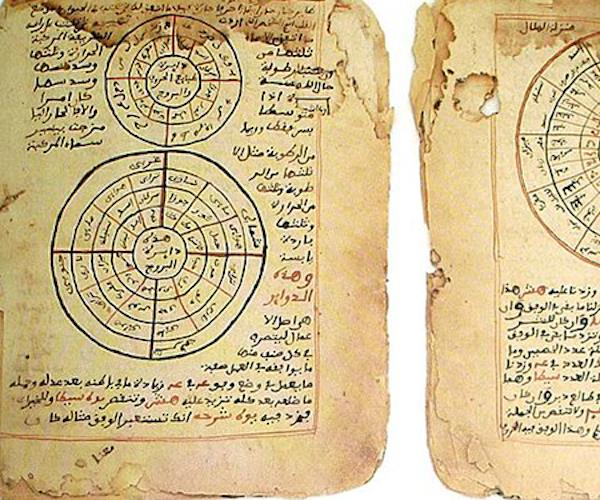 Too often, Hammer makes a simplistic binary distinction between tolerant Islam vs. violent Islam. However, he conveys the valuable point that while the ideology of jihadist groups and their desire to turn the clock back 1400 years gets top billing, the combatants are basically gangsters. Whatever flag they happen to be flying at the moment, they make tens of millions of dollars from ransom, piracy, and other activities. The destruction of cultural objects and places (not to mention archaic forms of murder such as beheadings) generates headlines that amp up their reputations.

Eventually Hammer gets back to telling the story of Haidara and his 20 (mostly teenage) badass assistants. Knowing Al-Qaeda in the Islamic Maghreb (AQIM) has its sights set on their community and that their cultural assets are in danger, they identify safe houses throughout Mali. They buy up all the wood and metal trunks for miles around. They hire donkey carts and trucks and taxis and boats. Working through the night and lit by flashlights, they create a kind of bucket brigade to bring the Ahmed Baba Institute’s most precious manuscripts out of storage and pack them up. They pay bribes for safe passage along back roads and avoid bombing by French Mirage jets. Haidara, thrillingly, orchestrates it all on brown butcher paper contact lists and over eight cell phones. This would make a good movie starring David Oyelowo.

A movie, however, would have a prop designer. It is maddening that a book that describes tomes decorated with calligraphy, gold leaf, and jewels has not one illustration. Given that the volume itself grew out of Hammer’s reporting for National Geographic (where the series was accompanied by gorgeous photographs)  and that the Institute itself publishes catalogs and facsimiles, this is inexplicable. Somebody was publishing on the cheap.

Success comes almost as an anticlimax. No smuggled manuscripts were lost; no rescuer was killed in the effort. Haidara lived on to find more manuscripts, to fight in his own way for the survival of his civilization. But the price of cultural preservation is eternal vigilance.

Debra Cash is Executive Director of Boston Dance Alliance and a founding Senior Critic of The Arts Fuse.