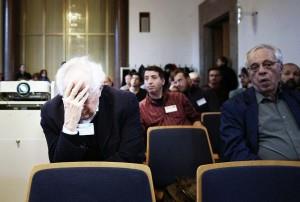 The status of evolution as a science is verging closer to extinction following a work shop in Germany last month. The essence and definition of science was on center stage at this historical convening of the leading physicists and philosophers of science last month. The meeting convened in the Romanesque-style Ludwig Maximilian University lecture hall. Science writer Natalie Wolchover covered the story for Quanta Magazine entitled “A Fight for the Soul of Science” and later reprinted by on TheAtlantic.com entitled “Physicists and Philosophers Hold Peace Talks.”

The fundamentals of physics currently face a critical problem, explained Nobel laureate David Gross to the three-day work shop attendees – a watershed moment for science. Wolchover explained, “desperate times call for desperate measures.” Specifically, at stake is whether the new concepts in emerging in physics – specifically, the string and multiverse concepts – is true science or just a philosophy. The pivotal issue centers on whether empirical evidence is still required to establish a scientific theory. Since science standards apply across the spectrum of the natural sciences, the outcome also determines the evolution’s science status.

The crisis tip-point occurred with publication of controversial ideas advocated by Richard Dawid, (pictured to the right)  an Austrian philosopher in the 2013 book “String Theory and the Scientific 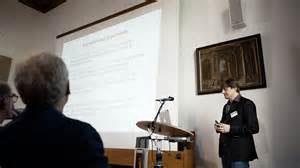 Method.” The problem stems from the absence of empirical evidence to scientifically supported these new concepts. Dawid argued that the essence and definition of science should be revised to allowing for three kinds of “non-empirical” evidences. The testability and falsifiability requirements of the Scientific Method would be optional.

In response to Dawid proposal, George Ellis from the University of Cape Town, and Joe Silk of the Paris Institute of Astrophysics (the two white-haired physicists pictured above in the front row) called for a consensus work shop to assess Dawid’s proposal in an “incendiary opinion piece” in Nature (2014) entitled “Scientific Method, Defend the Integrity of Physics – attempts to exempt speculative theories of the Universe from experimental verification undermine science.

Finally, last month one hundred attendees convened to wage, in what Ellis and Silk declared, a “battle for the heart and soul of physics.”

Ellis and Silk accuse string and multiverse conceptualists of “moving the goalposts” of science and blurring the lines between physics and pseudoscience. As Wolchover explains, the new theories are of a –

“wildly speculative nature of modern physics theories… a dangerous departure from the scientific method. Many of today’s theorists — chief among them the proponents of string theory and the multiverse hypothesis — appear convinced of their ideas on the grounds that they are beautiful or logically compelling, despite the impossibility of testing them.”

The problem is, the ancients used beautiful and logical ideas – otherwise known as deductive reasoning – ended up wrong theory. Historically, deductive reasoning track record has been a disaster in discovering the secrets of nature. Aristotle (384-322 BC), one of the most famous Greek philosophers, once reasoned that the “Earth is the center of the universe.” However, when Aristotle’s idea was tested using only empirical data, Nicholas Copernicus (1473-1543) successfully falsified Aristotle’s reasoning – but, at great personal sacrifice.

“The imprimatur of science should be awarded only to a theory that is testable… Only then can we defend science from attack.”

Gross, a prolific string advocate, who was awarded a Nobel Prize in 2004, had kicked off the workshop noting that the problem lies not with physicists, but with the “fact of nature” – an excellent example of anthropomorphic arrogance.

Over three winter days, scholars struggled with the meaning of scientific theory, confirmation and truth; how science works; and whether, in this day and age, philosophy should guide research in physics or the other way around. Over the course of the work shop, any degree of consensus to move the “goal posts” of science was lost in the resulting blur of confusion.