The Emoji keyboard and all emoji characters are now included directly in iOS for all iPhone (and iPad / iPod touch) users to access, it just needs to be enabled first. Adding the Emoji symbols to your keyboard is simple and only takes a moment, and because virtually every Apple device supports the icon graphics display, those you interact with will be able to see the emoji icons on their iPhones and iPads too, even if they don’t have the keyboard enabled themselves (though they will probably quickly want to turn Emoji on once they see yours!). After it’s enabled, you will gain access to literally hundreds of Emoji icons, which can be inserted anywhere that typing is allowed.

Ready to have fun with Emoji? Here is how to add the special keyboard to any iOS device including the iPhone, iPad, and iPod touch.

Enabling the Emoji Keyboard in iOS

This brings Emoji character support to everywhere in iOS, though we’re focusing on the iPhone for the walkthrough: 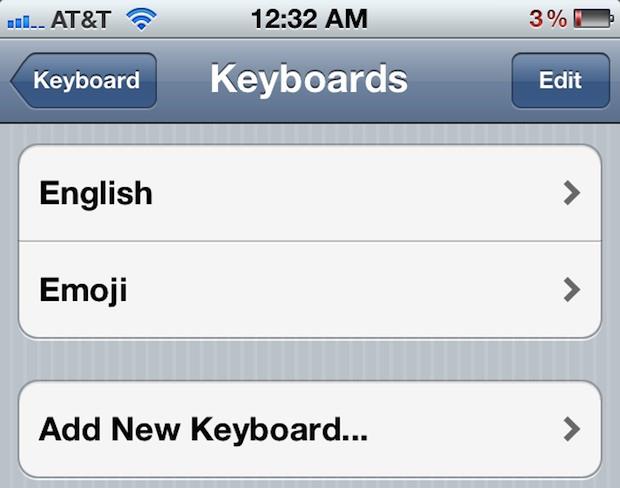 Now that the extra keyboard has been added, you will find “Emoji” under your default keyboard configuration. You can now begin to use Emoji icons as a means of having more expressive conversations over instant message, iMessage and texting, email, Snapchat, and whatever else.

How to Type Emoji Characters on the iPhone

To access the Emoji icons you must first be somewhere that the virtual keyboard is visible: 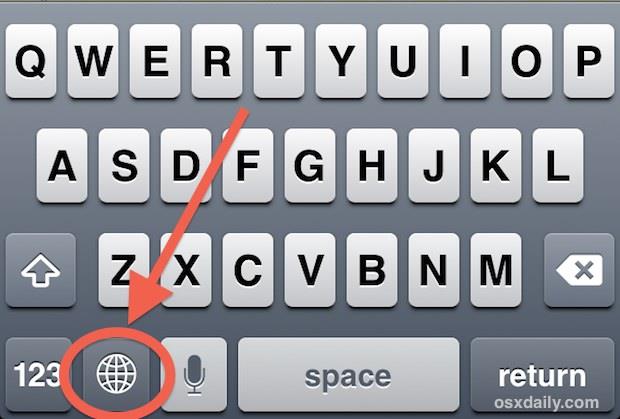 The globe represents international keyboards, which is what Emoji is technically listed as. Tapping that globe will now always summon the Emoji character and icon list, and tapping any Emoji icon enters it directly into the active text field as if it were a standard character.

You will find there are many different icon character themes available, each found under a broader theme found under the clock icon, face, flower, bell, car, and symbols. You can flip horizontally to scroll through the hundreds of characters, which each emoji theme section groups them under. There is also a frequently used character panel which gathers emoji that were used recently, which makes typing the same characters often much easier. 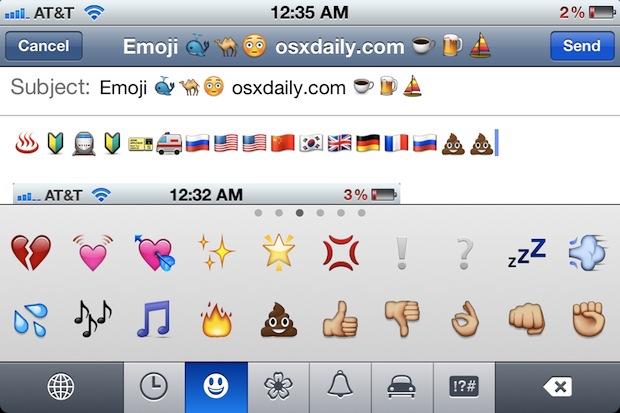 To return back to the normal keyboard and normal letters, just tap on the globe icon again. That will restore back to the default keyboard layout and you can type as normal. Toggling back and forth between the normal and emoji keys is very quick this way and you will quickly get the hang of it. 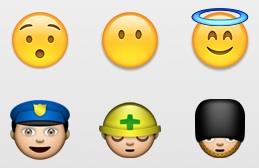 There are tons of Emoji icons available, and more are added in each major iOS release. Anyone running newer versions of iOS on an iPhone or iPad will be able to see the Emoji icons sent to them, and if you’re interacting with a Mac user, they can also see the graphical icons because Emoji support was added to OS X as well. Note that sending Emoji characters to a computer or device that does not support the same Emoji keyboard will cause a little square glyph to be displayed instead.

Emoji is pretty great, and there are some really hilarious and entertaining characters available to use. It certainly brings an additional element to typing emails and messages to people, and besides the entertainment factor it can genuinely add a lot of emotional value to conversations had through the iPhone and iPad that are pretty hard to convey through just standard text alone. 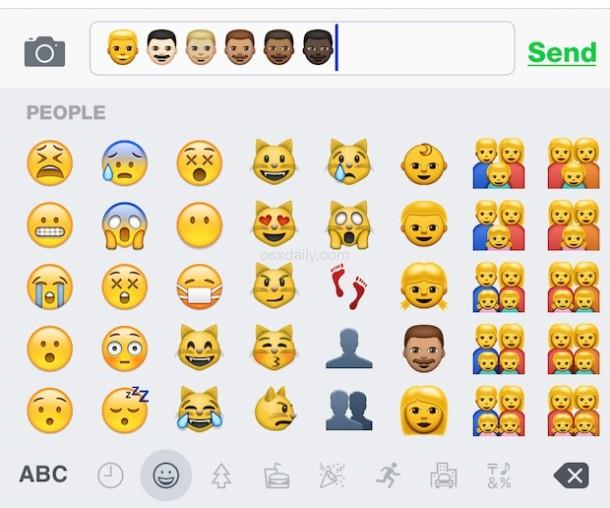 Outside of direct communication, you can so some fun tricks with Emoji, like adding the icons to iOS folder names (or on the Mac too) to customize the appearance of the homescreen, or, my personal favorite, add Emoji icons alongside peoples names in the contacts list, helping to stylize and distinguish certain people from others in the address book of your devices, and offering an element of customization that is very unique.