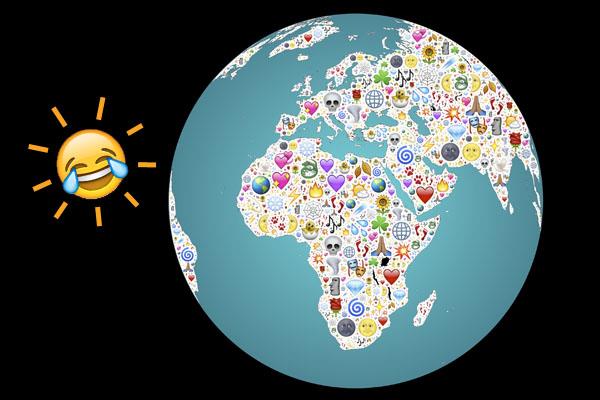 ​Emojis. Those colorful symbols are everywhere these days, even as decoration in high-fashion collections and, very soon, in movies. Yes, emojis have left the digital realm and are firmly entrenched in today’s wider popular culture.

At the same time, those little smiling faces have changed the way we communicate.

The world can sigh with relief – a set of 72 new emojis is coming soon, among which are the (much needed) avocado, selfie and facepalm. New additions to the Unicode Standard – the character coding system that supports emoji rendering on different platforms – always generate a surge of joy on social media. It seems that we can never get enough of those funny icons.

And the latest research shows that the appeal of emojis goes well beyond younger users alone – in fact, more than 80% of adults in the UK now use them in their text messages, while a whopping 40% admit to having created a message composed entirely of emojis.

So, given their even wider spread adoption, are we now talking about a new form of language?

Some argue so – language comes in many forms, and one of these can be the use of visual symbols. Indeed, today’s writing systems evolved from early symbol languages, which resemble emojis, and its no accident that the emoji homeland is Japan, a country with complex writing script and a “very visual” culture, as sociologist John Clammer puts it.

But will emojis take us back to the preliterate times of cave drawings? It’s true that they convey meaning on their own – after all, the 2015 Oxford Dictionaries Word of the Year wasn’t a word, but a pictograph.

According to Professor Viv Evans, the “face with tears of joy” emoji is a visual gestalt – “in one symbol, it communicates complex emotion, which can be described with several words”.

Emojis can indeed substitute for words, and even replace whole phrases. In 2015, research by Emogi found that online communication has become increasingly shorter due to the increased use of emojis. Internet slang is also changing as a result – common abbreviations such as LOL are no longer used as often as they have been in times past. Similar results come from the University of Valencia – their study analyzed the use of the thumbs-up emoji on Whatsapp and found that, when used alone, it serves many conversational purposes: it can signify acceptance or liking, show informality, close the discussion, etc.

And if you think that the 1282 currently available Unicode characters don’t suffice to express the depths of the human psyche, ask the translators of Alice’s Adventures in Wonderland or Moby Dick… sorry, Emoji Dick, two novels written entirely in emojis.

But even with their increasing use, it’s unlikely that we’re going to lose our written language to symbols anytime soon. The use of emojis is seen more as a creative form of language – when present in text-based messages, these symbols help us express ourselves better and more imaginatively, a compliment rather than a replacement.

And besides, emojis serve a far more important role than to merely replace words.

Originally, emojis were created as symbolic representation of emotions. Similar to punctuation, emojis are used to express emotion – irony or humor – and to substitute body language and tone of voice in text-based communication.

The latter point here is crucial – according to psychologist Albert Mehrabian’s 7%-38%-55% rule, only 7% of the information we receive when talking to someone reflects what they actually say. The rest comes from how they say it – their gestures, intonation, accent, speech rhythm…

Emojis (and their typographical siblings emoticons) can also trigger emotional responses in people, and can even induce empathy. Several studies have shown that negative emojis or emoticons in messages create negative feelings in the reader, and vice versa. In business communication, emojis can soften negative messages, such as rejections, requests, or complaints.

Take a look at the good old smiley for example – a study was recently conducted which analyzed readers’ reactions on receiving a short business email with or without a smiling emoticon at the end.

The messages used in the test were:

“I can’t make the meeting because it conflicts with my staff meeting. Email me and let me know what I missed.”

“I can’t make the meeting because it conflicts with my staff meeting. Email me and let me know what I missed. : -)”

The participants perceived the second message as beingless negative. It was also rated as less “professional”, but the author was seen as friendlier than the author of the first email.

Isn’t it weird how three punctuation marks can make us appear more friendly? In fact, we’ve been culturally conditioned to interpret emoticons as human faces. Neuroscientist Owen Churches from the University of Adelaide discovered that the same region in the brain is activated when seeing an emoji or an emoticon as when seeing an actual face.

Psychologists also say that emojis can help us deepen our emotional self-awareness, and make us more conscious of our own feelings. When we become better in identifying and labeling our emotions, we also become more sensible to the emotions of others.

Last but not least: research has proven that emojis make us enjoy communicating more.

A 2015 SwiftKey report on emoji use across the globe showed that happy faces – including winks, kisses, smiles, grins – were used 44.8% of the time, while sad and angry faces were only applied in 14.33% of cases. The third most frequently used emoji category was hearts (12.5%), while the two most frequently used hand gestures (thumbs-up and victory emojis), also carry positive meaning.

SwiftKey’s research also showed that users prefer anthropomorphic symbols – faces account for over 60% of all emojis shared. Data from Twitter on the most tweeted emojis confirms the tendency towards faces – the top three emoji categories on Twitter from mid-2015 to mid-2016 were faces, hands, and hearts. 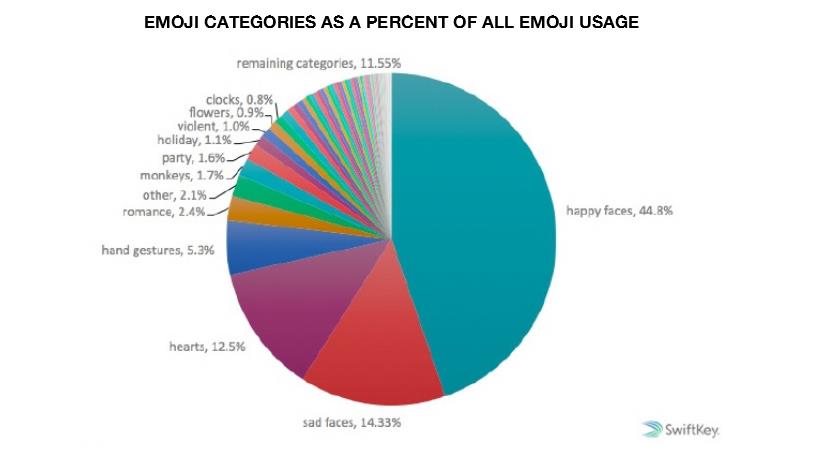 But that doesn’t necessarily mean that we’re all happy or in love. The fact that people tend to post more positive information about themselves on social media (it’s called impression management) may help explain the hordes of smileys. Another reason is that we have more difficulty expressing other emotions with symbols. For example, Emogi’s Research team found that in 20% of the cases, people can’t choose which emoji would depict “surprise”.

Don’t let me be misunderstood

Which brings us to the most interesting part: we interpret emojis differently.

Researchers from the University of Minnesota found that in 25% of the cases people were not sure if an emoji displayed positive, negative or neutral sentiment. There were also huge discrepancies in participants’ opinions on what certain emojis actually indicated. 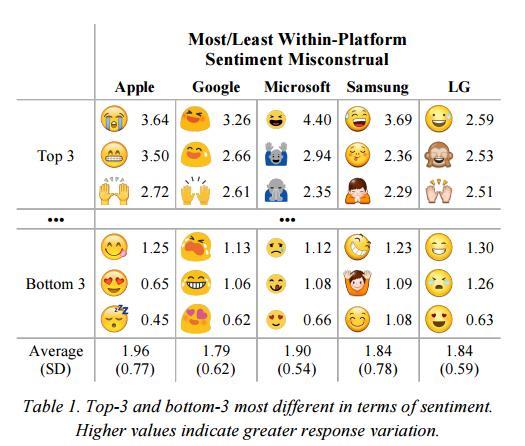 And if we mention the intercultural differences in emoji use, things get really messed up. To illustrate, one study found that Japanese bloggers tend to use more emojis than their American counterparts. Americans are also more “direct” when choosing emojis, while Japanese use the symbols mainly with decorative purposes.

Asian users also like emojis more. Researchers from the Jožef Stefan Institute in Slovenia analyzed a dataset of 17m geo-encoded tweets from around the globe and found that the highest number of tweets containing emojis (26.3%) came from Asia. The results also showed that tweets from “first-world” countries (North America, Western Europe, Australia) contained more emojis depicting objects and symbols, while all the other countries used more emojis related to emotions.

There are cultural variations in emoji use in Europe, too. Another Jožef Stefan Institute study revealed that Spanish users tweet with more emojis than other Europeans. The team analyzed a sample of 1.6m tweets in 13 European languages to detect 751 emojis. The results show that the English and Spanish tweets contained the largest variety of emojis, while the Portuguese, Bulgarian and Albanian tweets had the lowest number of different emojis.

Emojis can reveal a lot about our personality as well.

A recent study found that people who are more agreeable are more likely to use emojis on social media platforms. Agreeableness is a personality trait that correlates with better communication in real-world, too – agreeable people smile more and use more encouraging words when talking with others.

There’s also a strong link between social power and emojis. Influential social media users put more emojis (and more positive ones in particular) in their posts than low status users.

Gender also influences how we use emojis as well. Various studies have shown that women use emoticons more often than men. According to the Emogi research team, female users see graphic symbols as more enriching for the communication, while another report suggests that women use emoticons in more varied contexts, and mainly to express humor, while males mostly use them for sarcasm and teasing.

Shockingly, it’s also possible to guess a person’s occupation based on what emojis they choose. Researchers from the University of Rochester discovered that office clerks tend to use more emojis and emoticons, and show more negative emotions than people with other jobs such as IT specialists, marketers or start-up people. Designers and PR professionals also use emojis more regularly than other professionals.

Emojis can disclose your political affiliation, as well – content analysis by monitoring company Linkfluence showed that the French flag emoji is mainly used in tweets about centre-right politicians.

Even a tiny detail such as the presence of a nose on a smiley can tell something about the person who posted it. Researchers from Stanford University analyzed stylistic variations in emoticons in 38m tweets and learned that “:)” and “:-)” don’t mean the same thing. People who include noses in their tweets generally tend to write more, use fewer abbreviations, and make less typos. Noseless emoticons indicate a tendency to shorten other words, too. Also, users who omit noses were found to be younger, or to have “younger” interests than the other group.

How about that? It looks like we’re potentially exposing more than we might want to with these innocent graphics.

Can you relate to some of the findings? Share your opinion (extra points, if you do it in emojis). 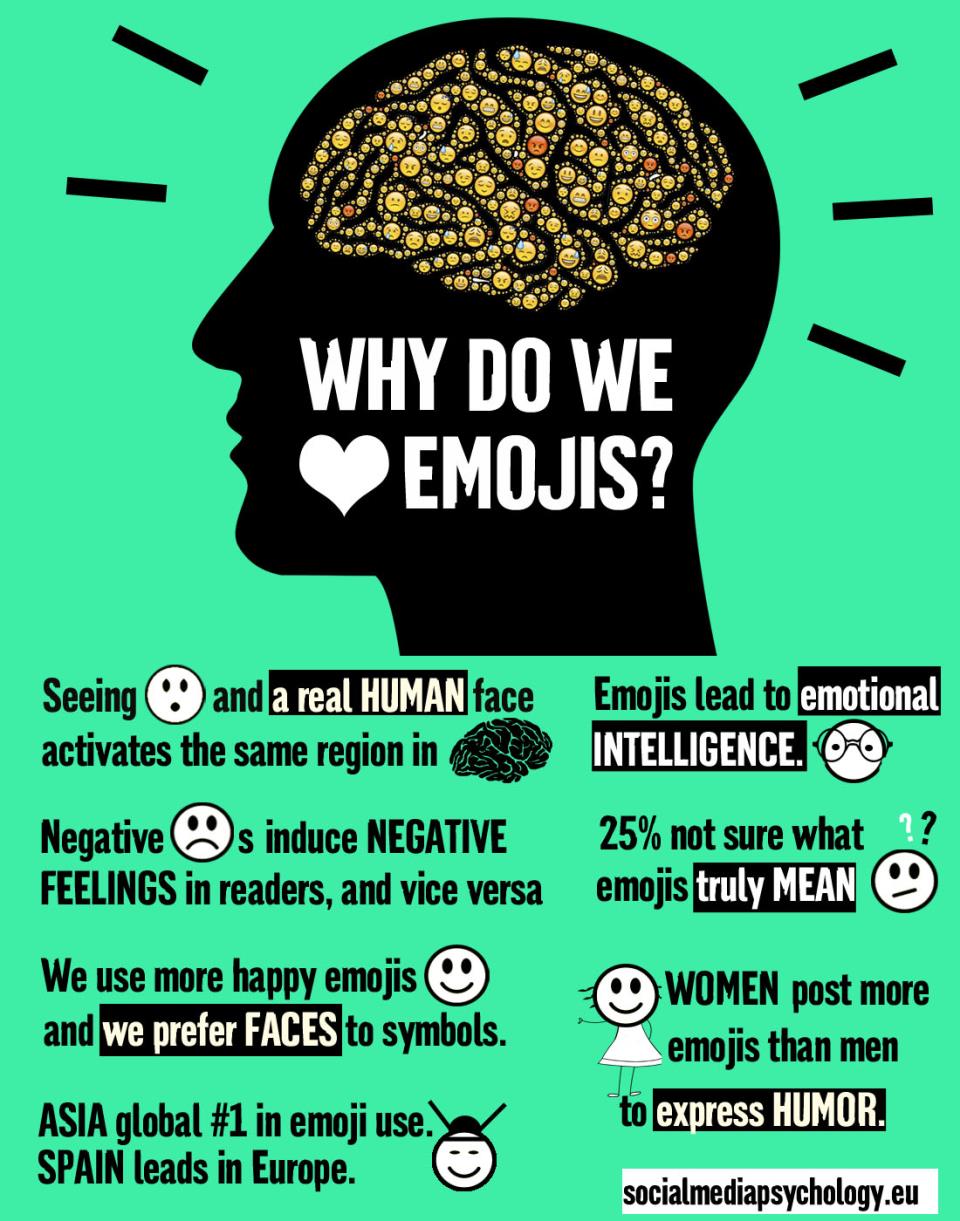