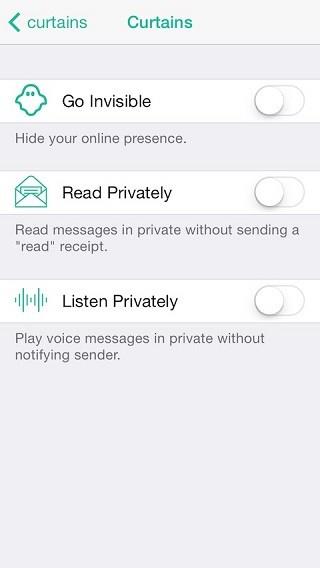 WhatsApp is one of the most popular messaging apps out there, however many users believe that the app needs to give its users more privacy. In recent updates the social app has started to give away more details about user’s activity to other people, which has annoyed many of its dedicated fans. A new tweak called Curtains tries to boost privacy in WhatsApp by taking some of the control from app’s developers and giving it back into the hands of people using it.

With Curtains tweak you can use the WhatsApp privately as it allows users to prevent the app from sending read receipts. Once installed the tweak won’t let anyone know whether you have read their message or not by preventing the app from showing blue tick marks. The hack also disables the typing indicator so person on the other end won’t be able to know whether you are typing at the moment or not.

Another great feature of Curtains is that you can hide your online status. So if you are chatting with someone else and still using the WhatsApp, the person on the other end won’t be able to find out whether you are still online or not.

Lastly the ‘Listen Privately’ option lets you listen to voice messages without notifying the sender that you have heard their message.

Curtains is a nice tweak that offers many handy features to the users. You can configure the tweak from Settings app. It is available in Cydia for $0.99 under the BigBoss repo.