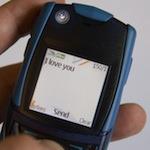 The eventual death of the text message, or SMS has been discussed for years now. And is it any wonder, with smartphone sales booming and mobile data skyrocketing?

The demise of SMS would indeed be bad news for the phone companies since revenues for text messages were $128 billion in 2011. Instant Messages (IM), on the other hand, are free and just keep increasing in popularity.

In 2011 we concluded that the volume of SMS was still growing around the world, but the rate of increase was slowing down. Now we are back with new numbers, showing that relatively soon, WhatsApp (one of the more popular IM-services) alone could be as big as SMS.

Smartphones are taking over

With a smartphone in your hand, you don’t need SMS as much anymore since apps like WhatsApp bring you the same service for free. This means that the increase in the use of smartphones will be crucial for the growth of IM. In fact, by 2018, smartphone subscriptions will account for 36% of the worldwide market for mobile phone subscriptions. 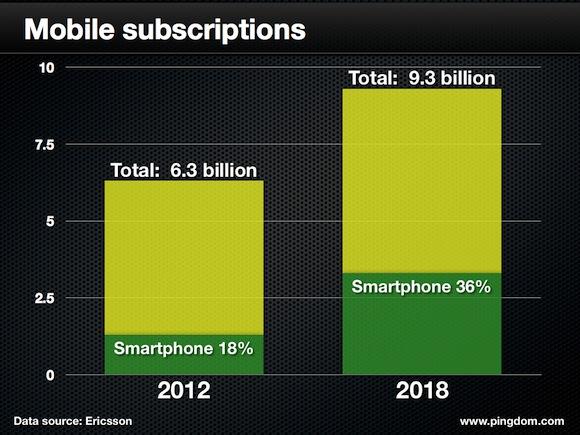 In the beginning of 2013, WhatsApp released new numbers, stating that 31st of December 2012 had been a record-breaking day for them.

In light of these numbers, we calculated what would happen over a year if WhatsApp had as many outbound messages every day as they had on New Year’s Eve. As you can see, one single IM-service would then come close to challenging SMS. 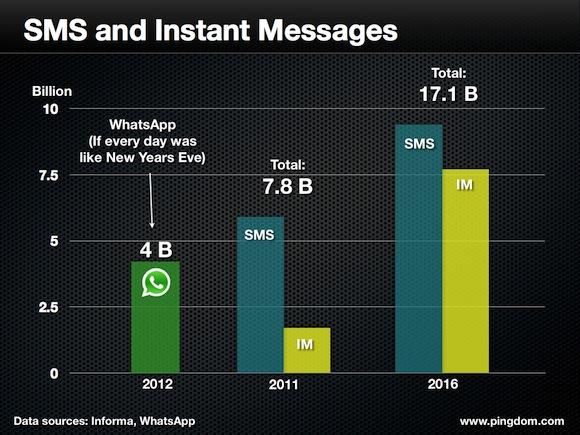 As the growth of WhatsApp and other IM-services increase, SMS is losing its lead. For example, in the Netherlands there has already been a decline in the use of SMS.

One problem for WhatsApp is that IM-services are primarily used on smartphones. SMS, on the other hand, can be used on any mobile phone. This is a huge advantage if you keep in mind that only 18% of all mobile subscriptions are smartphone subscriptions.

By 2018, in many parts of the world, almost everyone will use a smartphone. Therefore, we won’t need SMS the same way as before. If all of your friends and family have a smartphone, why would you pay for SMS when IM is free?

Still, there will be one problem; all your friends need to have the same IM-service. Today, WhatsApp doesn’t have that sort of world dominance, but Google and Facebook do in different areas. One of them also has an IM-service. The question is now, will WhatsApp be the IM-service to overtake SMS?